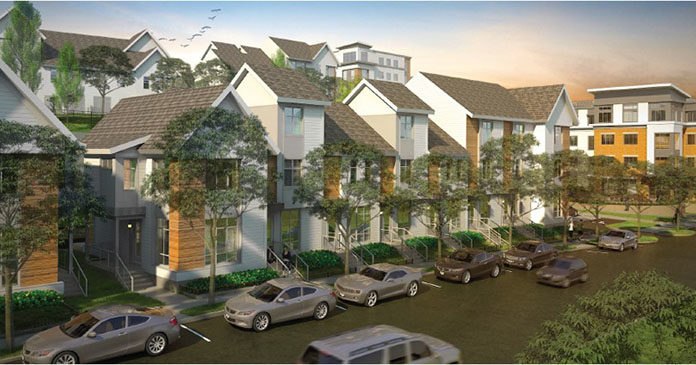 “Families deserve to live in homes that are safe, decent and affordable, and the redevelopment of Orient Heights will achieve that goal for hundreds of Boston families,” said MassHousing Executive Director Chrystal Kornegay. “The Orient Heights redevelopment project will preserve a critical affordable housing resource and ensure that East Boston remains a neighborhood that is affordable and accessible to residents of all means.”

“Today we celebrate another significant milestone in the revitalization of Orient Heights,” said Mayor Marty Walsh. “This effort will continue to improve the lives of our residents, while creating a community that more appropriately fits in with the surrounding neighborhood.”

“Trinity Financial is honored to be part of the redevelopment of Orient Heights,” said Eva Erlich, Vice President of Development for Trinity Financial. “Through our partnership with MassHousing, the Boston Housing Authority, the City of Boston, the Commonwealth of Massachusetts, East Boston Community Development Corporation, Citizens Bank and RBC Capital Markets, we are able to provide affordable and quality housing to the community of East Boston.”

“With the completion of Phase One, we saw the beautifully positive effect on the neighborhood and on the residents, who came back to their new apartments. We look forward to continuing our progress towards achieving with Trinity Financial, the goal of providing all of our residents and neighbors with a development we can all take pride in,” said EBCDC Executive Director Albert Caldarelli.

MassHousing is supporting the second phase of the redevelopment of Orient Heights by issuing $26 million in conduit financing. MassHousing will issue tax-exempt housing revenue bonds for private placement with Citizens Bank, the project’s construction lender. The MassHousing bonds generated $19.6 million in equity financing for the project, through federal Low-Income Housing Tax Credits.

The Orient Heights Phase II redevelopment is also receiving $16.7 million in public housing capital funds from the Massachusetts Department of Housing and Community Development (DHCD), $10 million from the City of Boston through the sale of the Winthrop Square Garage, $1.8 million in city linkage funds, and $500,000 from the BHA.

Over the past 17 years, MassHousing has worked with in partnership with the BHA to revitalize close to 2,500 units of the most physically distressed rental units in the city.

MassHousing has financed or manages the rental subsidy for 15 rental housing communities in East Boston involving 1,900 units and an original loan amount of $45.9 million. The Agency has also provided 8,342 home mortgage loans in Boston involving $1.1 billion in financing.

Since 1987, Trinity Financial has pursued a distinctive vision in real estate development, dedicated to revitalizing neighborhoods, strengthening commerce and fostering opportunities through a collaborative urban spirit. Their work spans half-a-dozen residential and commercial specialties, from multi-unit housing to transit-oriented development. Across that spectrum, Trinity projects demonstrate a high caliber of vision and attention to detail, which sets them apart and has led to sustainable success.

EBCDC has achieved success in reaching its goals through implementation of a variety of programs. EBCDC has helped to cushion the blow of high housing prices on low-income residents through loans, technical expertise, tenant associations and other assistance programs. Examples of EBCDC’s impact range from small to large rehabilitated properties, new neighborhoods of homes, and tenant-managed and tenant-owned developments. In addition, EBCDC works in collaboration with the community in the areas of business development and technical assistance, physical development, job creation and provision of social services.