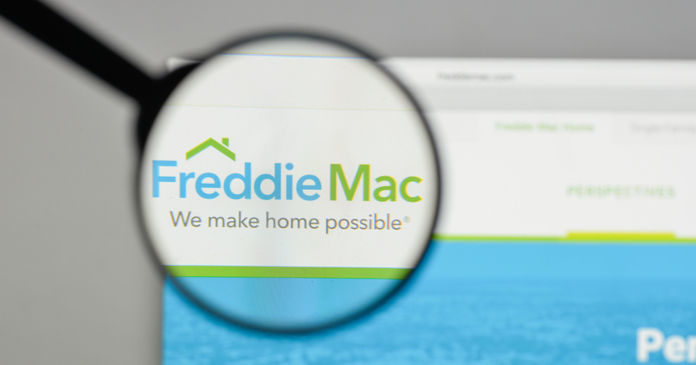 The report starts out by taking a look at where the market has been over the last few years. It does this by quoting data from several sources including RealPage, Yardi and REIS. This aggregation of data from several sources is one of the benefits of reading this report. However, since PRO discusses market update reports from these sources when they are issued, this post will focus on the areas where Freddie’s report provides unique insights.

Freddie Mac, being in the housing financing business, tends to focus more on the financial aspects of the multifamily market than some of the other data providers. An example of this is the report’s discussion of the spread between cap rates on multifamily properties and the yields on 10-year Treasuries.

The chart below is reproduced from the report. It shows that the trend since the year 2000 is for declining cap rates on multifamily properties, with an exception for the years after the recession where declining property values boosted cap rates. Given that occupancy has been increasing in recent years and that rents have been rising strongly, income produced per property has been rising fast. However, falling cap rates indicate that property values have been rising faster. Indeed, this can be seen in the Commercial Property Price Index line in the chart. Recent rates of price appreciation for multifamily properties have been above 10 percent according to the report. 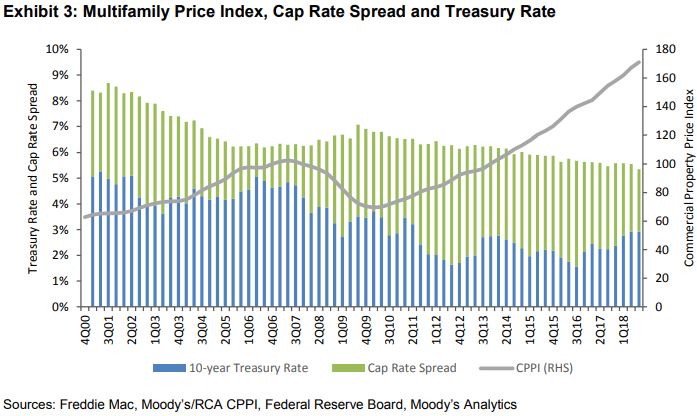 The spread between the yield on Treasuries and that on other investments is often seen as a proxy for the market’s appetite for risk, given that there is considered to be no default risk for US Treasuries. Since Treasury yields have been much more volatile than multifamily property cap rates, it is difficult to discern a long-term pattern to the yield spread between them. However, since early 2016, the spread has narrowed to the point where it is less than its long-term average. If Treasury yields continue to rise, it could put upward pressure on multifamily cap rates, resulting in lower rates of property price appreciation.

Freddie expects that the continued high rate of delivery of new units to the multifamily property market will result is a slight (0.2 percent) decline in the occupancy rate. The report projects that rent growth will also be down slightly from its current level, although it will remain above its long term average.

Multifamily mortgage originations are expected to rise in 2019, as they have done every year since 2009. Freddie expects $317 in originations this year, up almost 4 percent.

There is much more in the report including a discussion of local markets and a comparison between the rates of change in the cost of renting a property versus buying one. The complete report is available here.

For coverage of the previous report (mid-year 2018) from Freddie Mac, click here.