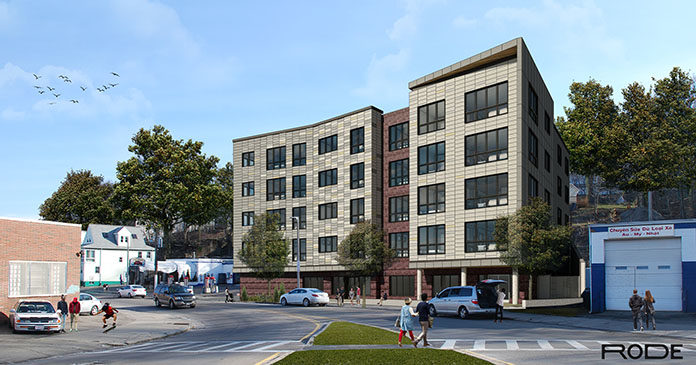 MassHousing is providing $2.1 million in affordable housing financing from the Agency’s Workforce Housing Initiative to support the development of 233 Hancock, a 36-unit housing community, Arx Urban. The MassHousing financing will help transform a pair of Dorchester automobile repair shops into 36 units of new mixed-income homes, including 21 units of new workforce housing.

“MassHousing’s Workforce Housing Initiative is a powerful and flexible tool for opening new economic opportunities, while ensuring that middle-income households can afford to live and thrive in Massachusetts,” said MassHousing Executive Director Chrystal Kornegay. “The City of Boston is committed to inclusive growth, and MassHousing is pleased to help the city deliver on its housing planning goals, by partnering with Arx Urban to transform an underutilized property into a new, vibrant housing community, and delivering new, long-term affordability for middle-income households.”

“Arx Urban is grateful to MassHousing and all of our partners for helping us to create much needed, new income-restricted housing in Dorchester,” said Arx Urban Principal Danny Moll. “We are humbled by the amount of community support we’ve received throughout the development process and look forward to establishing a new paradigm for socially-minded, mixed-income development in the City of Boston.”

MassHousing is supporting the development of 233 Hancock by providing a $2.1 million permanent workforce housing loan from the Agency’s $100 Million Workforce Housing Initiative. The Property and Casualty Initiative is providing $9.4 million in construction and permanent financing. Other sources include $3.2 million of socially minded private equity, and $500,000 in Community Preservation funding from the City of Boston.

The general contractor is Haycon. The architect is RODE Architects Inc. and the management agent is Trinity Management LLC.

Arx Urban is an innovative real estate firm focused on creating and preserving workforce housing in the Greater Boston area. Benjie Moll and Danny Moll founded the firm in 2013 with the mission to create a new socially minded, technology-enabled and forward-thinking approach to real estate. To date, Arx Urban has acquired or developed 18 multifamily and mixed-use projects throughout Greater Boston.