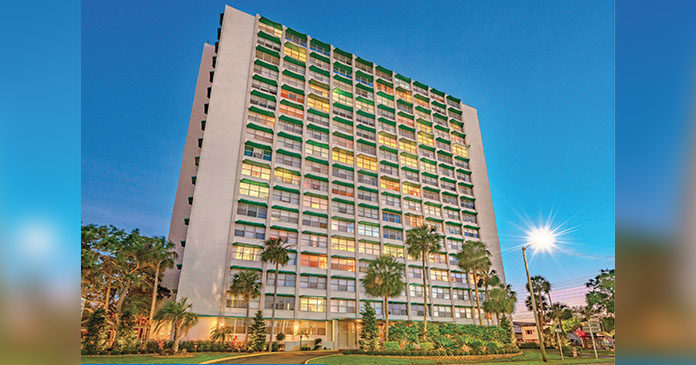 Well-positioned in an Opportunity Zone, the 17-story, multifamily building is located at 801 Chestnut St. and is comprised of 208 independent senior living units. Situated within close proximity to the Intracoastal Waterway and Memorial Causeway, the property is set on 2.3 acres and boasts a compelling unit mix of efficiencies and one-bedroom floorplans. Full-service amenities include a recreational room, library, business center, gym, and community kitchen, while each residence features expansive wall-to-wall windows with exceptional views of the Gulf Coast beaches, downtown Clearwater, and the surrounding area.

In this unique venture, Coral Rock Development Group and Arena Capital Holdings plan to jointly upgrade the aesthetics of the common areas throughout the property as well as enhance the interiors of a portion of select units. Innovation Senior Management will manage operations of the building on behalf of the owners, and will also implement new services for residents including home health and physician visits, and educational and social programs to enrich the overall living experience.

“We are very pleased to expand Coral Rock’s footprint with the acquisition of Prospect Towers, the second asset that we own and operate in partnership with Arena Capital Holdings,” said Stephen Blumenthal, principal of Coral Rock Development Group. “This acquisition aligns with our growth strategy and further strengthens our ownership presence in the state of Florida and we look forward to providing residents with a value-add program and building upgrades throughout.”

“We are continually seeking investment opportunities within prime Florida locations and Prospect Towers is an exciting addition to our growing portfolio,” added Oscar Rodriguez, Manager of Arena Capital Holdings.

Coral Rock Development Group and Arena Capital Holdings are also jointly developing the recently announced Pura Vida Hialeah, a nine-acre major mixed-use development set to be the first of its kind in the area in more than 20 years.

Led by Oscar Rodriguez, Ana Rodriguez and Sebastian Roiter, Arena Capital Holdings is a Miami-based, commercial real estate investment company that draws from a three-decade lineage of family-owned and operated real estate and banking businesses. Founded in 2002 by the family’s “next generation,” the company has concentrated on acquiring, repositioning, and adding value to multifamily and retail properties for long-term investment.