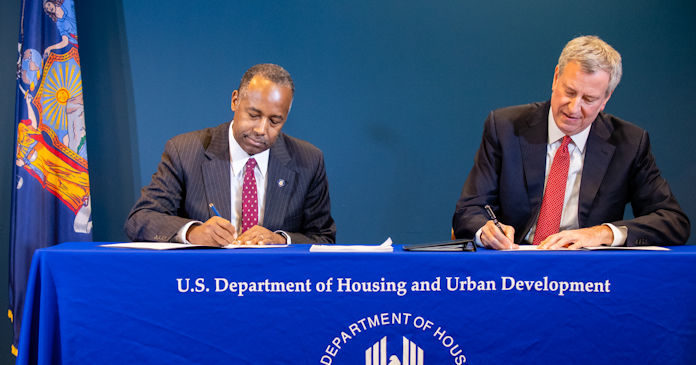 Outlines of a deal

The agreement replaces one reached earlier, which was blocked by a federal judge. The new agreement is not subject to judicial review.

The agreement calls for the four parties to it to appoint a new director for the NYCHA and a monitor to oversee its operation. Day-to-day operational control of the NYCHA will remain in the hands of the NYCHA staff. The monitor will be in place for a minimum of 5 years.

The NYCHA director and the monitor will appoint a management consultant to review NYCHA’s systems, policies, procedures. The consultant will recommend changes which the NYCHA is committed to making. As a minimum, these changes will include establishing a compliance department, an environmental health and safety department and a quality assurance unit.

The NYCHA must prepare an action plan for compliance with the terms of the agreement and submit it to the monitor. The monitor will issue quarterly reports on the progress the NYCHA is making and will hold quarterly meetings to gather feedback from residents. The agreement has specific goals for lead paint remediation, reducing the number of days when heat is not available in the buildings or when all elevators are out of service. There are also goals for reducing the populations of rats, mice and roaches and the presence of toxic mold.

The City ponies up

The agreement calls for New York City to inject significant new funds into the NYCHA. The city will provide nearly $2 billion for capital improvements over 10 years, with $900 million of that coming in the first two years. The city will also support the NYCHA operating budget with $971 million over the next 10 years.

Not everyone is happy

Some local officials in New York City were not happy with the agreement because it provided no increase in funding for NYCHA from HUD. In fact, Stanley Brezenoff, the interim director of the NYCHA refused to sign the agreement for this reason and so it was signed by his subordinate.

For reference: the current HUD funding level for the NYCHA is approximately $1.5 billion per year. This represents nearly two thirds of NYCHA’s revenue. The next highest source of funds for the NYCHA is the rent paid by residents, which has varied between 28 and 32 percent of its revenue.