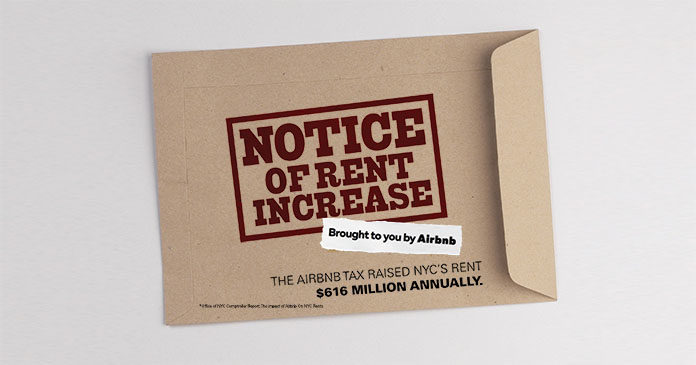 D.C. is restricting it. Florida might stop investing in it. New Orleans is trying to ban it completely. Across the country, legislators are not happy with Airbnb.

Since it was founded in 2008, the short-term rental platform has been the subject of several critical research papers that have blamed it for raising housing prices, changing employment dynamics, and taking chunks out of city tax revenue. A new analysis from the Economic Policy Institute attempts to more comprehensively catalog these local impacts—and measure what, if anything, cities get out of the deal. To better align the costs and benefits, the study’s author Josh Bivens argues, cities need to start treating Airbnb like any other hotel business, and regulate it accordingly.

“It becomes a straight conflict between whose interests you care more about: long-term residents of the city, or those that visit it,” Bivens said.

Since Airbnb helps homeowners take existing housing stock and turns some of it into short-term units, its biggest measured effect so far has been on housing prices—by repurposing units that might otherwise be long-term housing, it’s straining an already supply-short market. Rents rise in the process. The cities researchers have analyzed what happened to be already-pricey coastal metros, meaning Airbnb is just one of many factors at play. But, researchers say it’s a powerful one. “I was surprised at how early in the process of Airbnb expanding into cities that it has measurable impacts on housing costs,” said Bivens.

Parsing just how much of those bumps were natural growth and how much was Airbnb-related has proven difficult. In Boston, “a one standard deviation increase in Airbnb listings… relative to total housing units is correlated with a 5.9 percent decrease in the number of rental units offered for rent,” University of Massachusetts researchers wrote, which they say then translates into the price changes outlined above. But take the Brooklyn neighborhoods Bushwick and Bedford-Stuyvesant, which observed a 41 percent jump in the number of Airbnb listings from 2012 to 2016, for example: While rents there leapt an average of about $131 per year, according to the SSRN working paper, only about $27 of it can be attributed to Airbnb.

Something else happens when Airbnb enters a city: People rent Airbnbs, not hotel rooms. “Part of what Airbnb is doing, especially at the beginning of its expansion, is it’s displacing regular payroll jobs that are now being done by Airbnb owners,” said Bivens. Hosts are doing the renting, but they’re also often doing the cleaning or other service work that hotels hire for. If not, hosts may hire third-party cleaning services, which aren’t mandated to offer the same employment benefits as hotel staff. “It’s a form of this kind of fissuring of the economy,” Bivens said. “Spinning off jobs that used to be part of a big corporation… into a more insecure part of the economy.”

Airbnb itself acknowledges this potential consequence, the study observes: “Airbnb offers hosts the opportunity to advertise that they have taken the “living wage pledge” by committing to pay a living wage to the cleaners and servicers of their properties. It is not clear how commitment to this pledge is (or can be) enforced, however.”

Large hotel chains are doing similar outsourcing themselves, though—some of it to technology, which was a central complaint of Marriott hotel workers who went on strike in 2018. Workers’ new contracts, negotiated by the labor union Unite Here stipulate that union representatives have to be part of the discussion behind how and when to implement new technologies in the workplace. Marriott also agreed to a raise, and more protections from sexual harassment.

That’s a bargaining capability contractors working at Airbnbs don’t have. According to Bivens, “combined unionization rates for maids and cleaners in the hotel industry are nearly double the unionization rates of maids and cleaners in other industries in the economy” in the 10 U.S. cities with a particularly large Airbnb presence, including New York City, Los Angeles, and Chicago.

While Airbnb is said to increase tourism revenue—a NERA Economic Consulting study found that Airbnb supported 730,000 jobs and $61 billion in global output—Bivens cited two surveys that found only 2 to 4 percent of respondents wouldn’t have gone on trips if Airbnbs weren’t available. So, while Airbnb guests do participate in local economies, as the NERA study showed, Airbnb isn’t necessarily facilitating that spending more than other short-term rental options might. “It really seems to be almost a pure substitution of hotels,” he said.

And cities with less stringent Airbnb regulations might also be losing out on a lot of tax revenue. Traditional lodging entities (when combining city, state, and county taxes), are taxed at an average rate of 13 percent in the 150 largest cities. But Airbnb is treated differently in different jurisdictions, and is trusted to self-report its own occupancy and revenue data. Per a 2017 paper from the Institute on Taxation and Economic Policy:

Overall, by Airbnb’s count, the company is collecting sales, hotel, or other taxes in 26 states and the District of Columbia (D.C.) as of March 1, 2017. State-level taxes are collected in 18 of those states. Among this group, some or all local-level taxes are also being collected in every state except Connecticut, which lacks local lodging taxes. In the remaining eight states, Airbnb collects a patchwork of local taxes but no state taxes. In three states—Alaska, Maryland, and New Jersey—Airbnb’s tax collection is limited to a single locality (Anchorage, Montgomery County, and Jersey City, respectively).

To be clear, Airbnb is paying taxes. But, Bivens says, it could be paying more. One analysis by AlltheRooms.com estimated that in 2016, incomplete accounting—and illegal rentals—could have cost local and state governments $440 million in lodging taxes, $110 million of it from New York City’s budget alone. Since then, New York City has established some of the strongest Airbnb regulations in the country: It’s cracked down on illegal listings, and advanced legislation to require Airbnb to submit monthly revenue reports, and share information on hosts and their addresses.

“So far, it seems like a lot of the Airbnb tax relationships with cities is very much a negotiated, city-by-city kind of thing, where there’s not a lot of transparency,” said Bivens. “I think the number one thing would be for cities to step up, make transactions with Airbnb transparent to the public, and demand actual data from Airbnb.”

For vacationers who want more options at cheaper prices, Airbnb is great: Studies show that Airbnb expansion is correlated with lowered local hotel rates. And for renters who want to make an extra buck, it’s a welcome side hustle—Airbnb told USA Today that a proposed “whole home” short-term rental ban (requiring that owners be present and not rent the entire home) in New Orleans would “devastate” homeowners who depend on the platform. But even those benefits aren’t distributed equally,

Bivens says. Airbnb “landlords” who own multiple properties (one for occupying and at least one for renting) likely have an advantage on the platform, he argues, because “any economic occurrence that provides benefits proportional to owning property is one that will grant these benefits disproportionately to the wealthy.”

Since 60 percent of the property wealth in homeowners’ primary household is concentrated in the top 20 percent of households—and more than 80 percent of the wealth is held by white households—it stands to reason, Bivens says, that the ones who stand to make the most from Airbnb are already the wealthiest, and the whitest.

There are cities that have tried to level the playing field. D.C.’s new Airbnb restrictions prohibit property owners from using Airbnb (or other short-term rental platforms) to rent out their second homes, according to the Washington Post, and limits the number of days any primary residence can be rented out when owners are out of town. Airbnb objected to the bill, saying it favored hotels; as did some city councilors who warned the measure could cost as much as $96 million over four years in lost taxes—D.C. taxes Airbnb rentals at a steep 14.5 percent.

Not all renters are multiple-home-owning landlords of mini-hotels. Not all cities exempt Airbnb from traditional taxes. But, the report concludes, “there is little evidence that the net benefit of accelerated Airbnb expansion is large enough to justify overturning previous considerations that led to the regulatory status quo.”