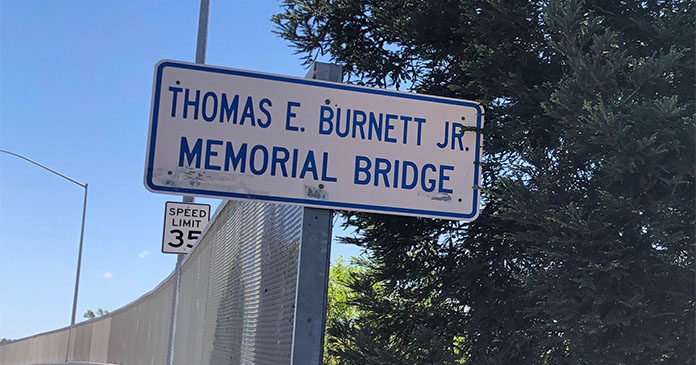 There was a sign posted on a wall of St. Thomas More school in Bel-Nor, Mo, entitled, “Lest we forget.” It was a short list—a reminder—of what “we” students believed and how these beliefs should guide our behavior.

I often stared at that sign over my school years. Call it habit, but even today I look for such signs when seeking truth in the midst of turmoil. What is American greatness?

Today, there’s a sign on an overpass near my home that answers that question best. I smile and say a prayer each time I drive by Thomas E. Burnett Jr. Memorial Bridge. It eclipses time and re-sets reality in an instant. Lest we forget.

The Burnetts were neighbors. Parishioners. Fellow Americans. We shared a belief in something bigger than this world.

Deena has since written a book about her experience titled, Fighting Back. It’s the story of finding purpose and the will to go on to raise her 3 beautiful young daughters without her husband, Tom. He was killed in the downing of flight 93 during the attacks of 9/11.

Here’s an excerpt of Deena’s last conversation with her husband, Tom. This is American greatness. Thank you, Tom, for your patriotism, faith and the courage to act.

Deena: Tom, you’re O.K. (Deena thought at this point that he had just survived the Pentagon plane crash).

Deena: They just hit the Pentagon.

Tom: (tells people sitting around him “They just hit the Pentagon.”)

Deena: They think five airplanes have been hijacked. One is still on the ground. They believe all of them are commercial planes. I haven’t heard them say which airline, but all of them have originated on the east coast.

Tom: Do you know who is involved?

Tom: What is the probability of their having a bomb on board? I don’t think they have one. I think they’re just telling us that for crowd control.

Deena: A plane can survive a bomb if it’s in the right place.

Tom: Did you call the authorities?

Deena: Yes, they didn’t know anything about your plane.

Tom: They’re talking about crashing this plane into the ground. We have to do something. I’m putting a plan together.

Tom: Different people. Several people. There’s a group of us. Don’t worry. I’ll call you back.

Tom: Where are the kids?

Deena: They’re fine. They’re sitting at the table having breakfast. They’re asking to talk to you.

Tom: Tell them I’ll talk to them later.

Deena: I called your parents. They know your plane has been hijacked.

Tom: Oh… you shouldn’t have worried them. How are they doing?

Deena: They’re O.K. Mary and Martha are with them.

Tom: We’re waiting until we’re over a rural area. We’re going to take back the airplane.

Deena: No! Sit down, be still, be quiet, and don’t draw attention to yourself! (The exact words taught to Deena by Delta Airlines Flight Attendant Training).

Tom: Deena! If they’re going to crash this plane into the ground we’re going to have do something!

Deena: What about the authorities?

Tom: We can’t wait for the authorities. I don’t know what they could do anyway.

Deena: What do you want me to do?

(after a long pause)

Deena: I love you.

Tom: Don’t worry, we’re going to do something.

Prepping for the oncoming rate hikes