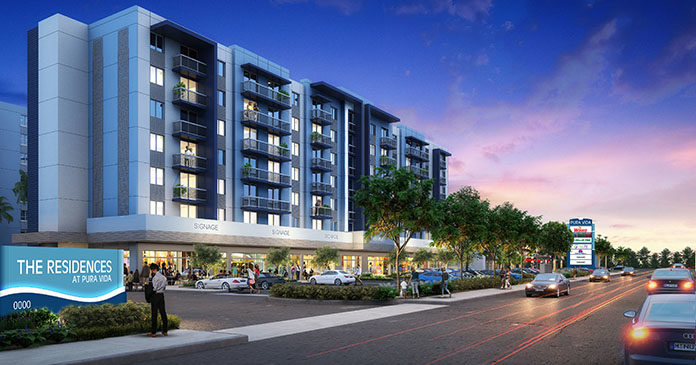 Is Hialeah the next Brooklyn? According to City of Hialeah Mayor Carlos Hernandez it may just be, and a transformative new mixed-use project, Pura Vida Hialeah, is paving the way.

Miami-based Coral Rock Development Group and Arena Capital Holdings recently commemorated the groundbreaking of Pura Vida Hialeah, a nine-acre mixed-use project set to be the first of its kind in Hialeah in more than 20 years.

When complete, the project portends to transform the area’s aging retail and residential offerings with the first new sleek contemporary designed vertical towers, and will boast a vibrant mix of popular restaurants, shops and other conveniences while providing an exceptional pedestrian-friendly lifestyle, adding a much-needed benefit to the densely populated community.

Jointly developed by Coral Rock Development Group and Arena Capital Holdings, the project is poised to become the new epicenter of Hialeah creating a contemporary and convenient new walkable lifestyle for Hialeah residents.

“We’re incredibly proud to officially break ground on Pura Vida Hialeah,” said Stephen Blumenthal, principal of Coral Rock Development Group. “A new paradigm for living in Hialeah, we’re extremely pleased that Pura Vida Hialeah will be a positive catalyst and usher in a new era in the community.”

“This is an exciting beginning to what will soon be an extraordinary and vibrant urban environment for Hialeah,” said Michael Wohl, principal of Coral Rock Development Group. “We’re very grateful to Mayor Carlos Hernandez and the City of Hialeah who have supported us in making this community-driven development a reality.”

Offering a wide array of floorplans ranging in size from 538 square feet to 1,099 square feet, the market-rate rental residences at Pura Vida Hialeah will include studios, one, two, and three-bedroom units. Featured amenities will include a resort-style pool, state-of-the-art gym, BBQ area, dog park, and 24-hour security staff for the convenience of residents.

Situated on a prime corner at 2901-3099 W 16th Avenue and 1571 W 29th Street, Pura Vida Hialeah boasts a central location just minutes from major thoroughfares including I-75, the Palmetto Expressway, the Florida Turnpike and Okeechobee Road, offering direct access to Greater Miami and the surrounding areas. The project is slated for completion in 2020.

Led by Oscar Rodriguez, Ana Rodriguez and Sebastian Roiter, Arena Capital Holdings is a Miami-based, commercial real estate investment company that draws from a three-decade lineage of family-owned and operated real estate and banking businesses. Founded in 2002 by the family’s “next generation,” the company has concentrated on acquiring, repositioning, and adding value to multifamily and retail properties for long-term investment.