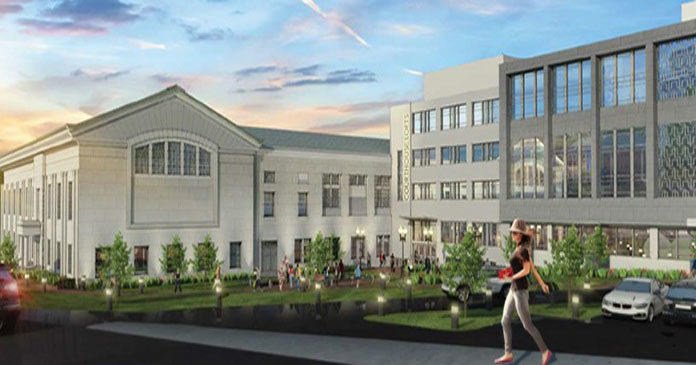 MassHousing has closed on $35.8 million in affordable housing financing to Trinity Financial, for the redevelopment of the former Worcester County Courthouse in downtown Worcester. The MassHousing financing will allow Trinity Financial to redevelop the former courthouse into 117 apartments for households across a wide range of incomes, including 45 workforce housing units.

The courthouse building, which has been vacant since 2007, will be a major component of the larger revitalization of Worcester’s historic Lincoln Square district.

“The transformation of the vacant former Worcester Courthouse into a new, inclusive housing community will be a major building block in downtown Worcester’s renaissance,” said MassHousing Executive Director Chrystal Kornegay. “Trinity Financial had a compelling vision for this property, transforming an historic structure into new homes for families of all means, from extremely low-income families, to workforce housing and market-rate households. MassHousing is proud to be a partner in helping to make that vision a reality.”

“We are thrilled to have started work on the historic renovation of the Worcester County Courthouse,” said Trinity Vice President of Development Michael Lozano. “Partners like MassHousing are essential to the work we do, and we thank them for all their support on the project.”

The Massachusetts Department of Housing and Community Development (DHCD) committed state and federal Low-Income Housing Tax Credits to the redevelopment, which will generate $20.9 million in equity financing for the project. Other financing sources include $10.7 million in federal historic tax credit equity, $2.9 million in state historic tax credit equity, $6 million in direct support from DHCD, and a $1.7 million deferred developer fee. The Massachusetts Housing Investment Corporation is the tax credit syndicator.

The Worcester Courthouse is adjacent to the Worcester Art Museum, Worcester Polytechnic Institute, Worcester Memorial Auditorium, and the Massachusetts College of Pharmacy and Health Services. The property also has access to public bus service and is less than a mile from the MBTA Commuter Rail at Union Station.

The general contractor is Tocci Building Corporation. The architect is The Architectural Team and the management agent is Trinity Management.

MassHousing has financed or manages the rental subsidy for 38 rental housing communities in Worcester totaling 5,546 units of housing with an overall original loan amount of $192 million. The Agency has also provided mortgage loans to 3,298 Worcester homebuyers or homeowners, with an original overall loan amount of $372.5 million.

Founded in 1987, Trinity is a community-driven, diverse team of real estate professionals with a proven track record of developing urban sites from New York to Greater Boston. They have the unique ability to complete complex, mixed-use projects overseeing all aspects of real estate – from finance to development to property management – on urban sites, especially those challenged by politics, infrastructure, environment or market profile. Their work spans half a dozen residential and commercial specialties, from multi-family housing to transit-oriented development. With more than $2 billion in transformative development work, they have a reputation for delivering high-quality multifamily projects resulting in a stronger urban fabric – with a commitment to people, place and partners. Their property management company, Trinity Management, was founded in 2012 and embodies an unparalleled commitment to residents and employees; enhancing communities and upholding a culture of outstanding quality, outside-the-box thinking, and diversity.

MassHousing (The Massachusetts Housing Finance Agency) is an independent, quasi-public agency created in 1966 and charged with providing financing for affordable housing in Massachusetts. The Agency raises capital by selling bonds and lends the proceeds to low- and moderate-income homebuyers and homeowners, and to developers who build or preserve affordable and/or mixed-income rental housing. MassHousing does not use taxpayer dollars to sustain its operations, although it administers some publicly funded programs on behalf of the Commonwealth. Since its inception, MassHousing has provided more than $23.9 billion for affordable housing.