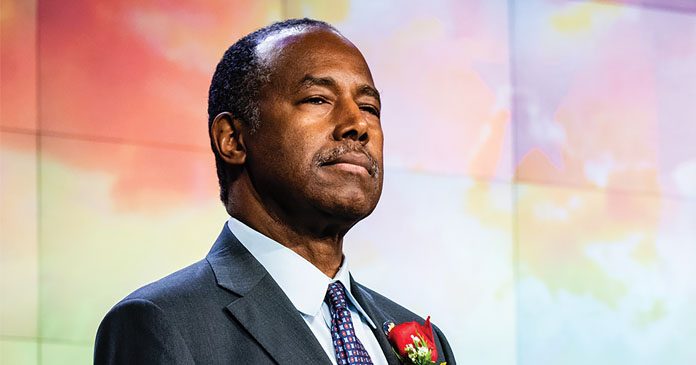 “Our country is facing serious housing affordability challenges,” Carson said. “Too many families can’t afford a home mortgage, and too many Americans face high rent prices. We must do more to increase supply and bring down housing costs by reducing state and local regulations and zoning restrictions.”

During remarks at a conference in May, the secretary cited a Brookings study singling out two California cities: San Francisco and Los Angeles.

Monthly housing costs for a family of four average $3,121 in San Francisco, Hayward and Oakland—the highest in the country, according to a USA Today analysis in April. The newspaper used data from the Economic Policy Institute and Bureau of Economic Analysis measuring the 25 most expensive places to live in the nation.

“To exacerbate the problem, last year California mandated that all new homes must have solar panels, which will further drive up the price of a new house,” Carson said at the May conference.

Carson has said he’s talked with mayors from both parties who agree on the need to roll back local land use and building rules, to make it easier to build new or renovate existing housing units.

Though they have not issued a formal plan yet, Carson and department officials have talked about the burden of local regulations and the impact on housing costs. As one possible path forward, the secretary said the department could tie federal money to a willingness to relax rules.

“Regulations such as density limitations, height restrictions, parking requirements, lengthy permitting and approval processes, and ‘not in my backyard’—opposition are the primary reasons for housing supply restrictions and increased housing costs,” Carson said during his May 17 speech in Washington. “HUD is working with local public officials, business leaders and community leaders to mobilize support for smart but significant deregulation at the local level.”

Lack of supply is among the biggest problems, according to the Department of Housing and Urban Development that Carson leads.

“Although affordability challenges in some areas of the country result primarily from low incomes and poverty, in other areas, particularly those with strong job and population growth, a constrained housing supply generates affordability challenges,” a 2018 HUD study said. “In the latter locations, regulatory barriers” drive the supply and cost problems.

The growing burden of regulation

Paul Emrath, VP of surveys and housing policy research at the National Association of Homebuilders, said environmental and safety regulations are needed but “builders are dealing with a wave of regulatory layers that are so involved and so complicated.”

He estimated that regulations account for more than 30 percent of developers’ costs.

“Of course, that contributes to the affordable housing crisis,” he said.

Regulations account for 32.1 percent of the cost for the average multi-family development, according to a study by two industry groups, the NAHB and the National Multifamily Housing Council.

Land use regulations make up the cost of 15 percent of a home price, while regulations that apply after a builder acquires the land make up 10 percent of the cost, according to a separate 2016 study by the National Association of Homebuilders. Meanwhile, the Joint Center for Housing Studies of Harvard University found 21 million U.S. households spend more than one-third of household income on housing expenses.

A National Apartment Association study found a connection between municipalities’ strong barriers to construction and the percentage of households spending at least 35 percent of their income on rent.

A case study of imbalance: California

“California is the top of the list in regulations,” said Ed McMahon, the Charles E. Fraser chair on sustainable development and environmental policy at the Urban Land Institute, a research group for the real estate and land use industry that include realtors, architects and lawyers.

The USA Today analysis found 12 of the 25 most expensive regions were in California, while an analysis by Kiplinger has five California cities in the top 20.

McMahon noted that Los Angeles voters approved a $1 billion bond in 2016 for affordable housing units to address its homeless population. However, he said the prevailing wage of $37 per hour discourages construction bids, along with the difficulty for developers to comply with the California Environmental Quality Act, and has stalled the vast initiative.

“Obviously, there is an undersupply of affordable housing and an oversupply of luxury housing units, and there is no silver bullet, but local and state laws add more time and money,” McMahon said.

A report last year by the New Democrat Coalition, a group of moderate House Democrats, found Tokyo offers one of the better examples for market reforms.

“One of the countries that has been the most effective at providing housing is Japan. Tokyo, for example, is larger than any U.S. city, is already heavily built up and has essentially no open land on its perimeter,” the report says. “Despite that, Tokyo built more homes in 2014 than California, which has three times the population and almost one thousand times the land area. By-right development limits or eliminates objections to developments that comply with all regulations and zoning and land-use plans. Bringing a similar approach to the U.S. could unleash more construction.”