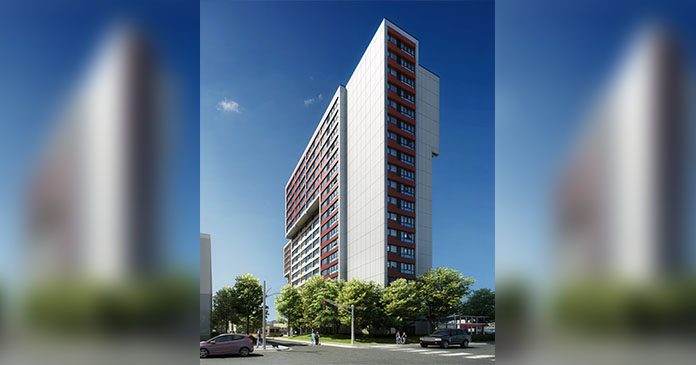 MassHousing has provided $82 million in financing to the Cambridge Housing Authority(CHA) for the extensive renovation of the Millers River Apartments, a 285-unit affordable housing community serving lower-income households in Cambridge. The transaction will also enable the CHA to extend affordability for the life of the property.

MassHousing is supporting the rehabilitation of Millers River with $82 million in financing through the Agency’s Conduit Loan Program. MassHousing issued tax-exempt housing revenue bonds and the proceeds will be used to fund both construction and permanent loans in partnership with CitiBank. The MassHousing conduit loan generated $71 million in equity financing for the project through federal Low-Income Housing Tax Credits. Project financing also includes a $44 million loan from CHA, and $2.8 million of development period cash flow.

“Cambridge has some of the highest rents in the country and this transaction will ensure that Millers River will remain affordable to lower-income households in perpetuity,” said MassHousing Executive Director Chrystal Kornegay. “The City of Cambridge and the Cambridge Housing Authority have been steadfast in their efforts to create and preserve affordable housing opportunities for the city’s residents. The property is also undergoing extensive renovations, which will increase the quality of life for its residents long into the future.”

“We very much appreciate the partnership with MassHousing to fund the extraordinary effort underway at Millers River. It took the CHA over fifteen years to cobble together the funding required to renovate Millers River and protect and preserve this critically needed affordable housing in Cambridge. MassHousing’s commitment was a critical element in allowing the project to move forward,” said Michael Johnston, CHA’s Executive Director.

The CHA has embarked on more than $100 million in property improvements at Millers River including, replacing failing building systems, roof replacement, significant building envelope improvements, complete renovation of apartment units, including asbestos abatement, accessibility modifications, and replacement of the existing fire protection sprinkler system in each apartment and throughout the building.

The general contractor is Consigli Construction Company, the architect is Dietz & Company and the management agent is Cambridge Housing Authority.

MassHousing has financed or administers the rental subsidy for 14 rental housing communities in Cambridge involving 2,051 housing units and an original total loan amount of $137.1 million. MassHousing has additionally provided $68.5 million in financing to 550 Cambridge homebuyers or homeowners who refinanced their property.

Established under state law on December 9, 1935, Cambridge Housing Authority (CHA) provides long-term rental housing and rental assistance to more than 5,500 low-income families, elders and disabled individuals through its Public Housing and Housing Choice Voucher (HCV) Programs. CHA invests in Cambridge families and provides enhanced support to almost 10 percent of the city population. By tailoring its approach to focus on policy innovation and family economic opportunities, CHA is able to meet its mission to develop and manage safe, good quality, affordable housing for low-income individuals and families in a manner which promotes citizenship, community and self-reliance in one of the most expensive housing markets in the country.