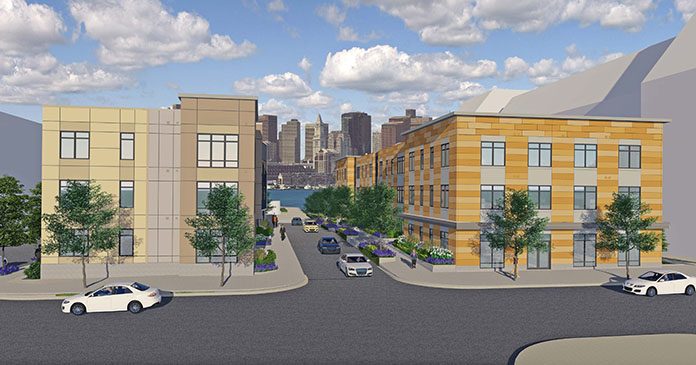 MassHousing has closed on a total of $11.2 million in affordable housing financing to WinnCompanies for the development of 22 new rental housing units and 30 new condominiums on the East Boston Waterfront. The Clippership Apartments and Clippership Condominiums will create new homes for households across a broad range of incomes, including 14 new workforce homeownership units in the condominium development.

“MassHousing is pleased to partner with WinnCompanies and the City of Boston, to transform outdated public housing into a new, modern, mixed-income housing community,” said MassHousing Executive Director Chrystal Kornegay. “This highly impactful redevelopment will expand affordable housing choices, and create new affordable homeownership opportunities, in a neighborhood that is experiencing rapid change.”

“This is an important opportunity to protect and diversify housing options in the City of Boston,” said WinnCompanies CEO Gilbert Winn. “Support from MassHousing and the Boston Housing Authority was critical to making this project possible, enabling a true mixed-income development in a very desirable location.”

“One of our top priorities is to upgrade our city’s stock of affordable housing,” Boston Housing Authority Administrator Bill McGonagle said. “This project preserves the Clippership property and offers permanent affordable housing for 22-low income families in East Boston.”

As part of the redevelopment plan, WinnCompanies will also construct a 30-unit mixed-income homeownership building, the Clippership Condominiums, on-site. The redevelopment project will improve public access to the waterfront from the surrounding Maverick Square neighborhood.

The general contractor will be Cranshaw Construction, the architect is The Architectural Team and the property manager will be WinnResidential.

WinnCompanies is an award-winning national developer and manager of high-impact affordable, middle income and market rate housing communities. Supported by 3,000 team members, the company acquires, develops and manages affordable, senior, mixed-income, market rate, military and mixed-use properties. Founded in 1971 and operating in 22 states and the District of Columbia, WinnCompanies is one of the nation’s leading multi-family housing managers with 100,000 units under management.

MassHousing (The Massachusetts Housing Finance Agency) is an independent, quasi-public agency created in 1966 and charged with providing financing for affordable housing in Massachusetts. The Agency raises capital by selling bonds and lends the proceeds to low- and moderate-income homebuyers and homeowners, and to developers who build or preserve affordable and/or mixed-income rental housing. MassHousing does not use taxpayer dollars to sustain its operations, although it administers some publicly funded programs on behalf of the Commonwealth. Since its inception, MassHousing has provided more than $24.3 billion for affordable housing.