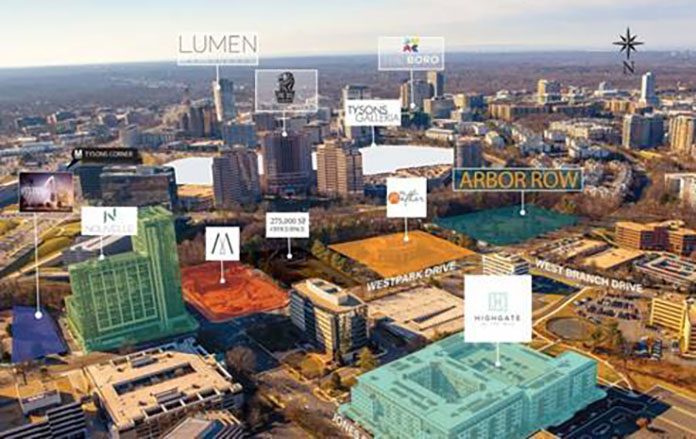 Washington Property Company (WPC) has acquired a 5.2-acre parcel of land in the heart of rapidly redeveloping Tysons, VA, with plans to develop approximately 700 new rental apartments under its well-known Solaire brand. John Sheridan of CBRE Group Inc. represented the seller, a global private equity firm, in the transaction.

“We are excited to bring the Solaire lifestyle to the most appealing neighborhood in the new Tysons,” said Daryl South, Senior Vice President of Development for Bethesda, MD-based WPC. “Walkable to Metro’s Silver Line and Tysons Galleria, Arbor Row will soon have more than three thousand residences and over 40,000 square feet of its own shops and restaurants.”

Located on the southwest corner of Westpark and West Branch Drive, the parcel is part of the 19-acre Arbor Row neighborhood stretching along Westpark Drive, with new mixed-use development replacing 1970s-era office buildings. Nouvelle’s 461 rental apartments delivered in 2016, and the Monarch luxury condominium tower is under construction for 2020 delivery. A large senior living community, The Mather, is planned for 2023 completion just across the street from WPC’s newly acquired site.

All of Arbor Row is situated just a short walk from the Ritz-Carlton hotel, the Tysons Corner Metro station, popular restaurants including The Palm and Fogo de Chao, and the Tysons Galleria shopping mall with more than 100 upscale stores and restaurants. Arbor Row residents enjoy easy access to the future Wegman’s and Whole Foods, as well as extensive entertainment and transportation options.

After rezoning Arbor Row in 2012, Cityline Partners contracted with Home Properties to develop the site known as Parcel A, but County-approved plans were not carried out. An affiliate of Lone Star Funds acquired Home Properties in 2015, and an existing office building on the site was razed in 2017. CBRE started marketing the site earlier this year.

The Tysons development will be WPC’s sixth Solaire-branded community and its first in Virginia. Four completed Solaire developments, totaling over 1,000 units, are located in close proximity to Metrorail’s Red Line in Silver Spring, Wheaton, and Bethesda, MD. The fifth Solaire, slated to be the tallest building in Silver Spring, is expected to break ground by the end of 2019. WPC has just delivered the 20-story Solaire 8250 Georgia Avenue, with 338 apartments and 15,000 SF of retail space designed to activate the streetscape of Silver Spring’s Ripley District.