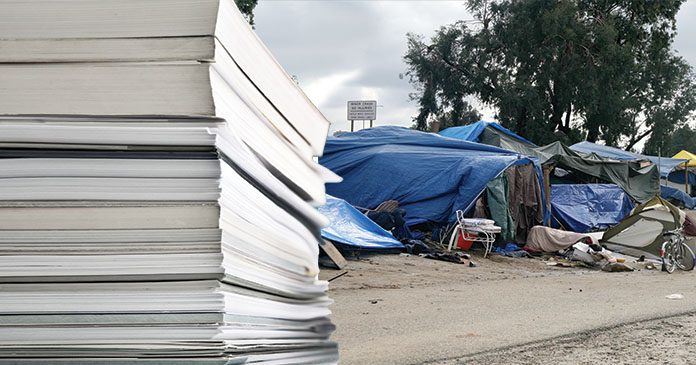 The homeless represent the most vulnerable portion of Americans living in poverty. The latest U.S. government report on homelessness shows that a culture of secularism and statism is depriving Americans of church philanthropy, curbing the free market’s ability to provide, and leaving the most vulnerable reliant on the government—or the mercy of the streets.

The Council of Economic Advisers detailed their conditions in its report on “The State of Homelessness in America,” released in September. It found that “rent controls” may have priced homeless Americans out of an affordable home, permissive policies may increase homelessness, and those with no connection to a church or faith community are 60 percent more likely to end up homeless.

Facts you need to know:

Someone is counted homeless if he or she “lacks a fixed, regular, and adequate nighttime residence,” according to the U.S. Department of Housing and Urban Development (HUD).

“Almost half (47 percent) of all unsheltered homeless people in the U.S. are found in California, about four times as high as their share of the overall U.S. population. Among the five cities with the highest rates of unsheltered homelessness, four are in California (San Francisco, Los Angeles, Santa Rosa, and San Jose), and the other is Seattle.”

According to HUD’s 2018 annual homelessness count, “111,122 homeless people (20 percent) had a severe mental illness and 86,647 homeless people (16 percent) suffered from chronic substance abuse. Among all adults who used shelter at some point in 2017, 44 percent had a disability.”

The department also found that nine percent of U.S. homeless had spent time in a jail or correctional facility. However, HUD may have undercounted this population, as other surveys found up to 4-in-10 homeless are alcoholics and an equal number have mental health issues.

The report states that individuals with “weak social ties are more likely to become homeless.” It cites a study that found “the lifetime incidence of homelessness is reduced by 60 percent for individuals with strong ties to family, religious communities, and friends.”

While California’s mild temperatures may facilitate unsheltered homelessness, they cannot account for its disproportionate share of the homeless problem.

The report said government policies, including “the extent of policing of street activities may play a role in these differences.

Boston, New York City, and Washington, D.C. are each subject to right-to-shelter laws that guarantee shelter availability of a given quality. These places each have rates of sheltered homelessness at least 2.7 times as high as the rate in every other city, and this difference cannot be explained by their weather, home prices, and poverty rates. Boston, New York City, and Washington, D.C. also have substantially higher rates of overall homelessness than almost every other city, suggesting that most people being sheltered would not otherwise sleep on the street.

The report states that the cost of median rent and homelessness rise in lockstep, finding a virtually one-to-one ratio. “A central driver of higher home prices in some communities is the heavy regulation of housing markets by localities,” the report says.

We find that for the 11 metropolitan areas with housing regulations that drive home prices significantly above home production costs (which contain 42 percent of the United States homeless population), deregulation would reduce homelessness by an average of 31 percent. Homelessness would fall by 54 percent in San Francisco, 40 percent in Los Angeles, and 23 percent in New York City. Overall homelessness in the United States would fall by just under 72,000 people, or 13 percent.

The Acton Institute exists to connect good intentions with sound economics. “Affordable housing policies” like rent control may have decreased housing supply, pricing the poorest Americans out of the market—and leaving them on the streets. This, combined with a permissive policy of turning a blind eye to non-violent street crime, may have increased the number of homeless and/or prolonged their stay on the streets.

Finally, this report shows another danger of America’s secularized, atomized culture: Church membership significantly decreases the likelihood of homelessness. Christians seeking to reduce homelessness should support a greater role for churches and private philanthropies, and less government interference in the housing market.

Author Rev. Ben Johnson is senior editor at the Acton Institute. In addition to being an experienced journalist, editor, and radio commentator, he is also an Eastern Orthodox priest.