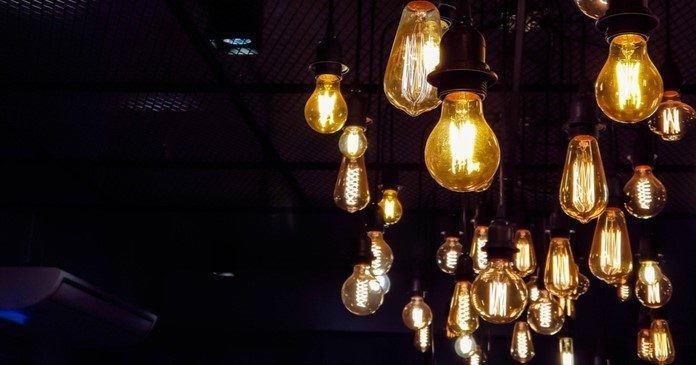 The Bureau of Labor Statistics (BLS) released its producer price index report for September 2019. It showed that overall prices for processed goods for intermediate demand fell by 0.4 percent in the month. The index was also 3.4 percent lower than its year-ago level. Excluding food and energy, the price index for processed goods for intermediate demand was down by 0.3 percent.

The BLS price index of construction materials was down 0.4 percent from August 2019, before seasonal adjustment. It was only 0.6 percent higher than its year-earlier level.

For reference, the changes in these indices compare with a 1.7 percent rise in the all-items consumer price index (CPI-U) for the 12 months ending in September.

Multihousing Pro (PRO) compiled the BLS reported price changes for our standard list of construction materials. These are commodities whose prices directly impact the cost of constructing an apartment building. The two right hand columns of the table provide the percent change in the price of the commodity from a year earlier (12 Mo PC Change) and the percent change in price from June 2019 (1 Mo PC Change). If no price data is available for a given commodity, the change is listed as N/A.

Lumber prices are down significantly from their recent highs and have been relatively stable in 2019. Compared to their July 2017 levels, prices of these products have actually fallen. This is in sharp contrast to early 2018 when the rapid run-up in lumber prices sent shock waves through the construction industry. Price changes for softwood products are shown in the first chart. 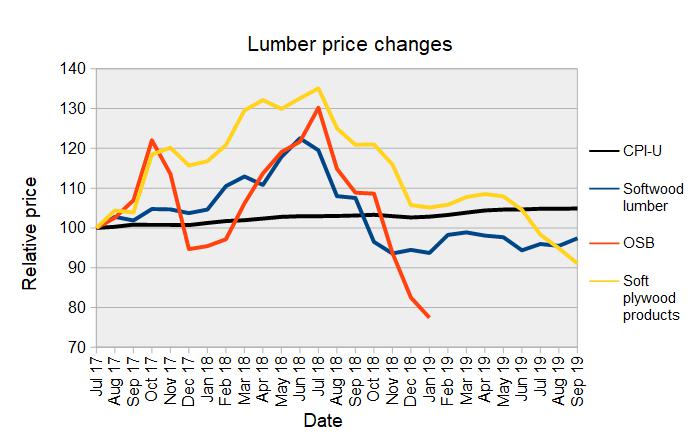 The BLS dropped Oriented Strand Board (OSB) from its report after January 2019 and so data for this product category is no longer available.

The surge in lumber prices in 2017 and early 2018 was followed by rapid increases in the prices of several other construction materials. These price changes may have been influenced by the tariffs which were imposed on certain imports and are illustrated in the next chart, below. The chart shows that they have generally stabilized or fallen recently. 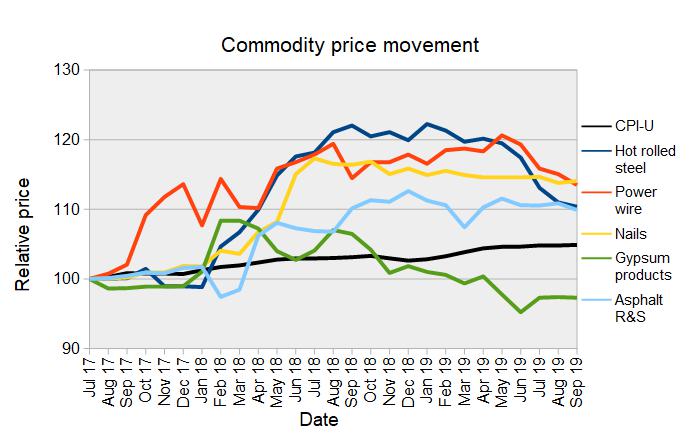 Recently, price inflation has been more prominent in finished goods with the prices of electrical lighting fixtures leading the way. Their prices are up 12.5 percent over year-ago levels, the greatest increase of the commodities we track. After an earlier jump, the prices of furnaces and heaters have fallen for the second month in a row and are now up only 5 percent over the last 12 months. At the same time, while the prices of plumbing fixtures and fittings were unchanged in September, they are still up 7 percent year-over-year, good for second place on our list. These price changes are illustrated in the final chart, below. 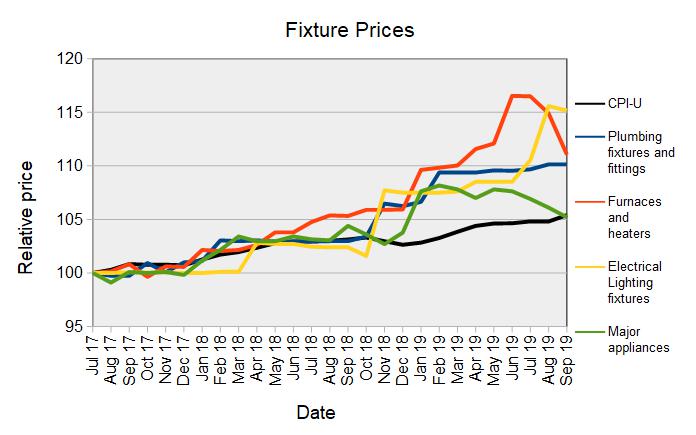