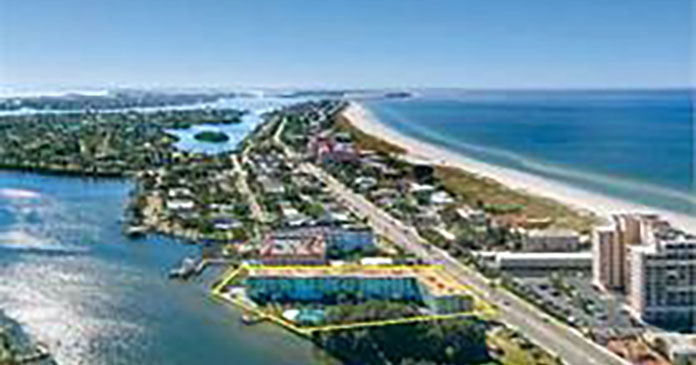 Marcus & Millichap, a leading commercial real estate investment services firm with offices throughout the United States and Canada, has announced the sale of Sand Cove Apartments, a 72-unit apartment property located in St. Pete Beach, Fla., according to Chris Travis, sales manager of the firm’s Tampa office. The asset sold for $14,500,000.  The sale equates to $201,389 per unit.  According to Costar, that is the highest price paid for a 1970’s-built multifamily community—in either Pinellas or Hillsborough County—since 2006.  It is also the highest price ever paid for a 1970’s-built community of a dozen units or larger in Pinellas County.

“The extremely rare chance to acquire significant scale in the submarket attracted numerous prospective buyers from across the county,” said Roberts.  “That competition, combined with a significant value-add opportunity, allowed us to generate this record-setting purchase price,” added Roberts.

Along with the price per unit record, the waterfront asset traded at a well-below market capitalization rate of 3.46 percent.

Sand Cove is by far the largest multifamily community in St. Pete Beach.  At 72 units, it is more than three times the size of the next largest community and represents more than 20 percent of the market-rate apartment stock in the city.

“This was one of the most difficult deals we’ve transacted on during our tenure at Marcus & Millichap.   Despite some major hurdles along the way, Ned, Adam, and myself were able to work as team to get this deal to the finish line.  We ended up finding the perfect buyer who shared our vision for the future potential of this asset, and we’re excited to see that vision executed on over the next few years,” added Hague.

Sand Cove Apartments is located at 3813 Gulf Boulevard in St. Pete Beach, FL.  The irreplaceable waterfront property is located on the Intracoastal Waterway, directly across the street from world-renowned Gulf of Mexico beaches.  All units at the property feature water and pool views.  Sand Cove Apartments has frontage to Gulf Boulevard which sees 23,000 vehicles per day.

“Our ability to showcase the demonstrable upside offered by Sand Cove was ultimately what allowed us to compress the takeover capitalization rate to sub-3.5 percent,” said Podbelski. “The tremendous opportunity provided by both the asset’s size and location are what attracted a very-well experienced owner/developer to close on an all-cash basis at contract price with non-refundable money day-one,” added Podbelski.