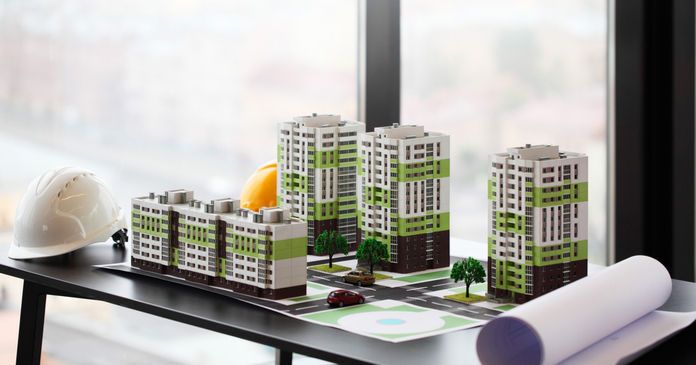 The number of permits issued for buildings with 5 or more units rebounded in January to 522,000 units on a seasonally adjusted, annualized basis, a recent high. This figure was up 15 percent from the revised figure for December and up 16 percent from the number of permits issued in January 2019. With this report, 4 of the last 6 months have seen permits for buildings of 5 or more units exceed 500,000 units on an annualized basis. This indicates that developers have very aggressive plans for introducing new product to the market in the next 12 to 18 months.

In addition, 42,000 permits were issued in January for buildings with 2 to 4 units. This was up slightly from the previous month, but only because that figure was revised downward.

Nationally, the three-month moving average for permits issued for multifamily housing in January was nearly unchanged from December but was up nearly 10 percent from the level of January 2019. This is shown in the first chart, below. The chart clearly shows the recent sustained high level of permit issuance.

On a month over month basis, the permit issuance was up in all regions of the country except in the South, where it fell by nearly 7 percent. Permits rose by around 10 percent in both the Midwest and the Northeast and were up marginally in the West. It is interesting to see that the recent enactment of rent control measures in California and Oregon do not yet seem to be having a significant effect on plans for building in the West. 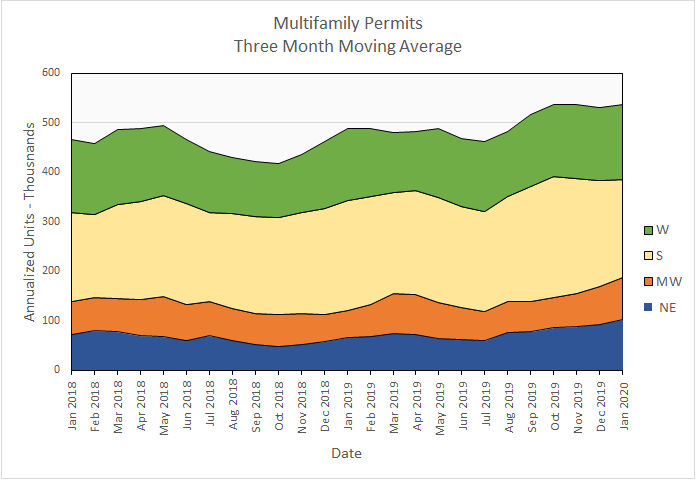 The very high number of multifamily housing construction (5 or more units per building) starts reported last month for December was revised downward only slightly in the latest report. At the same time, the report estimated that the number of construction starts for the month of January was up, reaching a level of 547,000 units on a seasonally-adjusted, annualized basis. This was an increase of 3 percent from the revised figure for December.

Compared to year-earlier levels, construction starts for buildings with 5 or more units were also up strongly, rising over 77 percent from their January 2019 level.

Multifamily housing construction starts (two or more units per building) were up 9.2 percent from their December levels for the country as-a-whole, based on three-month moving averages. Both the Northeast and South saw double-digit rises in starts, while the West saw starts rise by just under 7 percent. The only region where estimated starts fell was the Midwest, where they were down by 14 percent compared to an exceptionally strong December level.

On a year-over-year basis, starts were up 48 percent for the country-as-a-whole. Starts doubled in the Midwest from the year-earlier level and nearly doubled in the West. The Northeast and South lagged with starts rising “only” 36 and 26 percent respectively. 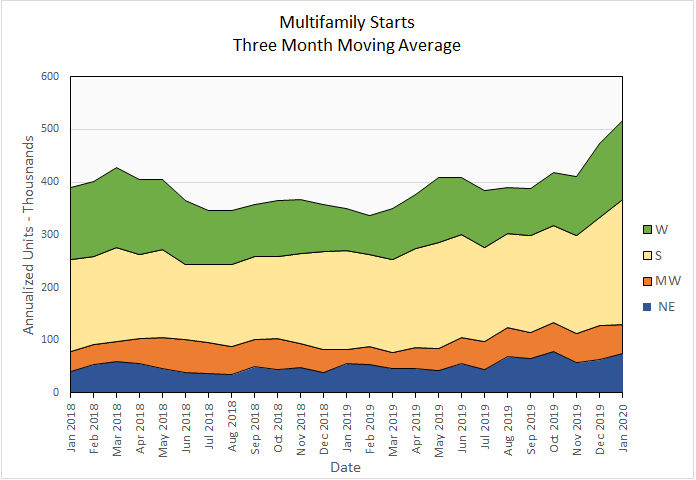 Nationally, completions of buildings with 5 or more units were reported to have fallen slightly. However, that is because the estimated figure for December was revised strongly upward in this report from 357,000 units to a new estimate of 406,000 units. The January initial estimate of 397,000 units is a strong figure and is well above the recent average level of completions. Compared to the year-earlier level, January completions of building with 5 or more units were up 18.2 percent.

For the country as-a-whole, completions for multifamily housing (two or more units per building) were up 5 percent month-over-month, comparing three-month moving averages. For the third year in a row, completions are rising early in the year bringing new product on-line in time for the spring-summer leasing season.

By region, the three-month moving averages of multifamily housing completions were down 14 percent in the Northeast but were up in other regions of the country. All three other regions saw completions rise by double digits, or nearly so.

On a year-over-year basis, the three-month moving average of completions was up by 17 percent. The Midwest and Northeast saw completions jump by 84 and 31 percent respectively, although this had more to do with the year-earlier completions figures being exceptionally weak than it had to do with particular strength in these regions. Completions rose by 12 percent in the South and were unchanged in the West. 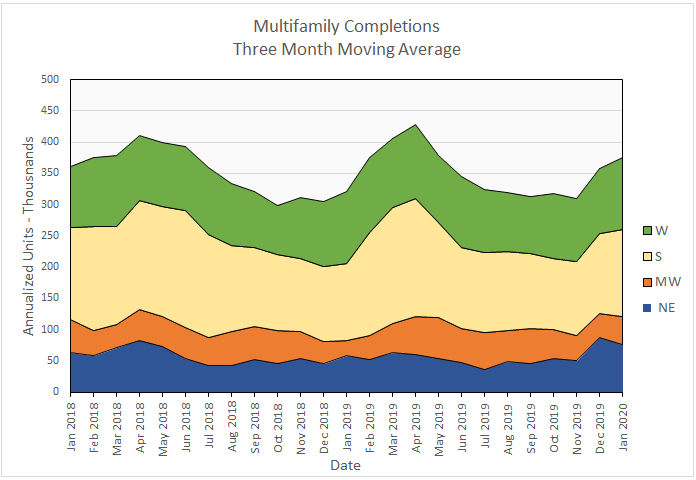