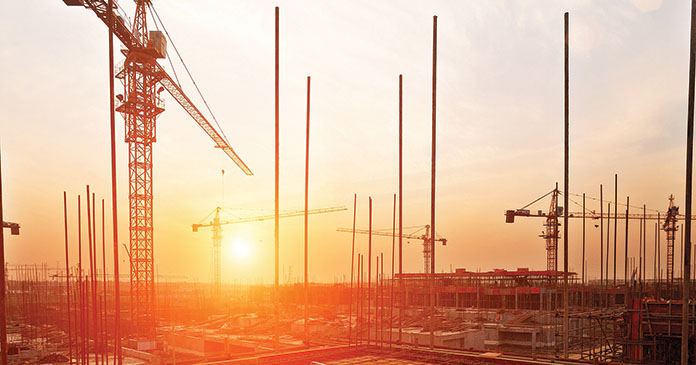 Apartment developers have not been shy about bringing new product to market in recent years. And early indications are that 2020 will be another boffo year. The question is after several big years of hefty additions whether the market can digest the units that are in the works.

“The volume of apartments on the way in 2020 certainly could test the market’s ability to absorb a big block of additional units in a short time frame,” says Greg Willett, chief economist at real estate technology and analytics firm RealPage, Inc.

This late in the real estate cycle—after more than a decade of economic growth—many investors are making conservative choices, wary of a potential downtown. But apartment developers plan to make 2020 one the busiest years in the last decade for new construction. They continue to focus on the largest metro areas—especially “gateway” cities—where strong local economies can help fill new apartments. The amount of construction is being facilitated by the fact that lenders remain willing to provide construction financing even with so many projects on the books.

The number of new apartments likely to open would be even higher if not for widespread delays that are likely to force thousands of apartments to open in 2021 rather than 2020. “Construction labor is reportedly tight,” says Andrew Rybczynski, managing consultant for CoStar Group. “That powers those delays.”

That number would be even higher if not for widespread construction delays. “Builders give us optimistic time frames on how long it will take buildings to complete,” says Andrew Rybczynski, managing consultant for CoStar Group.  “If we look at our raw data, we find that we have been told that well over 400,000 units will deliver in 2020.” CoStar expects that thousands of those apartments won’t really open until 2021.

Rising material costs are another factor affecting development, but not enough to slow construction.

Other research companies expect even more new apartments than CoStar—RealPage estimates the number of units opening as 370,942 in 2020. That’s up 50 percent from 246,779 counted by the firm in 2019. Both years are a substantial increase from the rate developers opened new apartments over the last decade of roughly 200,000 a year.

Construction delays pushed thousands of apartments that had been scheduled to open in 2019 into 2020. “While that will happen again in 2020 to some degree, current expected delivery timing is heaviest in the first half of the year,” says Willett.

Their enthusiasm to build appears to have faded somewhat for projects scheduled to open further in the future. The number of units now under construction that will open in 2021 is less than the number likely to open in 2020. “It currently looks like the completion volume will cool substantially in 2021,” says Willett. 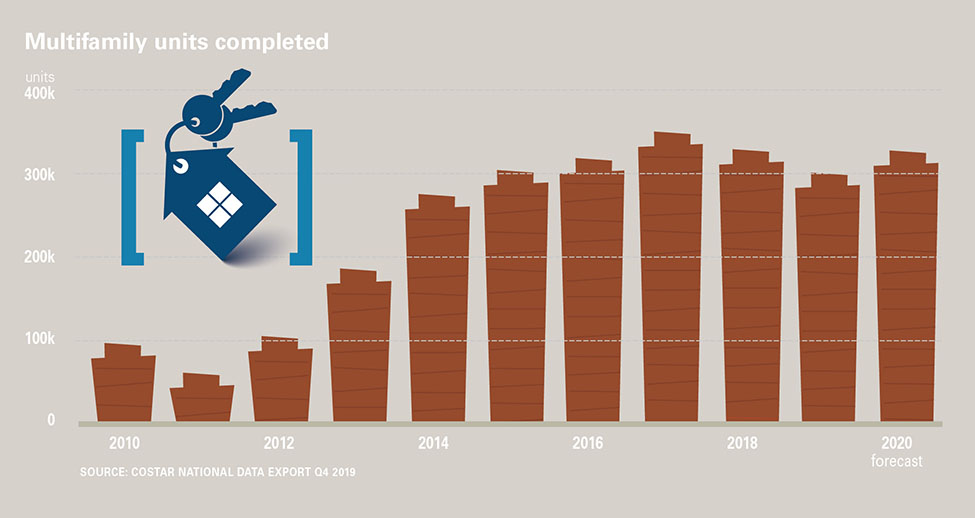 Developers continue to concentrate on the largest 50 metropolitan areas. In 2020, developers will again open 85 percent of their new apartment in these places, compared with just 15 percent opening in the next 100 largest markets in size, according to RealPage. Within the top 50 metro areas, about 25 percent of the apartments scheduled to open in 2020 are in the urban core and 75 percent are in other parts of the metro area.

Developers sharply increased the number of apartments they plan to open in gateway markets in 2020 compared to 2019. For example, the completions scheduled for the three San Francisco Bay Area metros is up by more than 158 percent, according to RealPage. The number of scheduled completions for 2020 is also more than double the number in 2019 in Los Angeles and Boston and nearly double in Washington, D.C.

“It takes longer to get product from the drawing board to actual completion in those markets than it does in the Sun Belt,” says Willett. “Thus, many of this year’s new supply in gateway metros was initiated back when U.S. rent growth peaked in late 2014 through early 2016.”