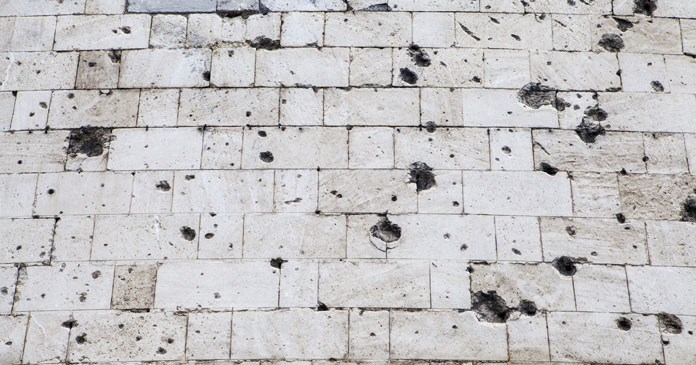 I’m just back from the Balkans. It takes traveling to the genesis of the word balkanize to understand true division. To the naked eye, these people appear quite similar. Looks can be deceiving and in this case, history reveals all.

Beautiful, centuries-old (bullet-riddled) architecture. Spectacular history, seascapes and (pock-holed) castles. Don’t be fooled. Below the surface is far more than an intricate maze of secret tunnels in case of attack or sudden outbreak of civil war.

This is a big year for us. And by us, I mean the collective us and the grand U.S.: red, blue, developers, operators, renters and everyone in between.

How far we have traveled. Wasn’t it just yesterday that whispers of recession were sticking to the bottom of our shoe like old gum.

Today we have a record number of 401(k) and IRA millionaires, a growing stream of household formations as far as the eye can see and an economy that is on fire for all of us, and still promising more.

Lest we forget the small print. As humans, we navigate toward the power of bad (The Power of Bad) so let’s name it and get it out of the way.

The impact of rent control in addition to out-of-control regulations and other taxation, has begun to rear its ugly head in the investment world. Investors have recoiled from its cold shoulder, flying instead to warmer pro-business climates. There’s still time for these ill-guided cities and states to mend their doomed ways (Rent Control is illegal).

And the sooner the better as time is of the essence. The country desperately needs more affordable and workforce housing. The latest Harvard study says it ever better: the country needs more apartments. All classes of product benefit the market.

While federal regulations are finally rolling back, state and local laws, case-by-case sweetheart improvements and other local impediments to construction are beginning to show signs of easing.

Greater and broader studies are shedding light on the true costs of construction including greater in-kind fees, i.e. giving part of a project’s land to the city, building parks or community structures as part of a development deal.

One example occurred in San Francisco. The project took 15 years from first submission to break ground. Along the way the developer was asked for everything from a feral cat relocation program to a leather museum memorializing the history of one of the streets it edged. That’s a talking point that never seems to be addressed when the topic of high rents in San Francisco is mentioned.

While such “improvements” have long been part of local approvals, such hurdles have greatly expanded in recent years without drawing attention.

When I was told during the process to bring “gifts” for the judge when adopting my kids decades ago, I held my nose and did it. But that was a third-world country. Today it’s so prevalent that developers have it figured into the construction cost calculations.

Regulations and “gifts” to cities and towns are taxes. They are a hidden cost of doing business that rarely reach the light of day in the public discussion of rents and housing supply and other ills impacting residents and prospects. When we hide facts, it’s not an honest discussion. Without an honest discussion, there’s no sustainable solution.

From the years-long dust up in Lafayette, Calif. where the developer paid both sides of the court battle against him, to the homeless in New York, the conversation should be a battlefield of ideas grounded in truth and historic metrics, where the only weapon is persuasion, not a sword of compulsion or activism.

And therein, dear reader, lies the root of problem. We’ve lost the art of persuasion. Not just in matters of housing, but across the board. Fact is replaced with Newspeak (1984, George Orwell).

Business operates on pragmatism and profit. We’re seeing the benefit of free markets when legislative intervention is dialed back. Finding the right regulatory balance is the next milestone.