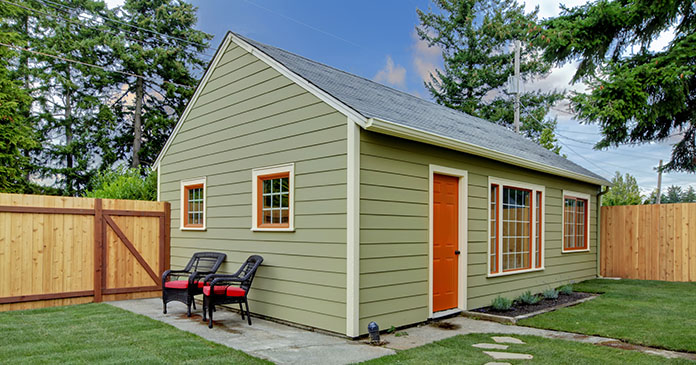 More than three quarters of homeowners across 20 large metro areas agree local governments should do more to keep housing affordable, and most agree that allowing more building would help, according to a new Zillow survey. But while there is meager support for new large multifamily buildings, more than half of homeowners say they and others should be allowed to convert their homes to create additional housing.

That’s according to the latest Zillow Housing Aspirations Report, which asked homeowners for their feelings about how best to help quell affordability issues by allowing more homes into their neighborhoods, and comes as in-law suites and backyard cottages gain attention as possible solutions to sharply rising housing costs. Previous Zillow research has shown that even modest rezoning to allow for more accessory dwelling units—creating two, three or four dwellings where only one sits now—could spur the creation of millions of new homes nationwide.

This kind of mid-density is often referred to as “missing middle” housing, slotted between single detached homes and much larger apartment complexes of several hundred units. “Missing middle” units are the only type of home to have gotten more affordable in the past year, but very few have been built in the past 20 years compared to previous decades: They make up only 4.3 percent of homes built since 2000 compared with 8.2 percent in the 1980s.

In all, 57 percent of those surveyed agreed that homeowners should be able to add additional housing on their property, and 30 percent said they would be willing to invest money to create housing on their own property if allowed.

Support also was strongest among homeowners of color—two-thirds (67 percent) of Black homeowners supported this type of density, compared with just over half (54 percent) of white homeowners—perhaps because of persistent homeownership gaps due in large part to historical discriminatory and exclusionary housing policies.

Advocacy was more muted for larger multifamily buildings. Only 37 percent of homeowners surveyed said they would support a large apartment building or complex in their neighborhood—and that support was more starkly divided among generations. Nearly 60 percent of younger homeowners (18-34) were open to large buildings, compared with only a quarter of those 55 and older.

Overall support for development of these larger apartments is highest in the Chicago (47 percent), Miami (45 percent), Washington, D.C. (44 percent), and San Francisco (43 percent) metro areas, and lowest in the Atlanta metro (29 percent).

However housing comes about, more than three-quarters of homeowners surveyed said single-family neighborhoods should remain that way, with more older homeowners (81 percent) agreeing than younger homeowners (69 percent). And a little more than half said adding homes was acceptable if they fit in with the general look and feel of the neighborhood. Homeowners expressed concern about the impact of more homes on traffic and parking, with 76 percent saying that it would have a negative impact. About half said it would have a positive impact on amenities and transit.

“In an era of historically low supply and escalating housing prices, the need for more solutions to create housing opportunities is greater than ever. Our latest research shows that homeowners in major markets are generally supportive of providing a range of housing options that allow for not only more housing units, but also a diversity of housing types in existing communities,” said Zillow senior economist Cheryl Young. “Homeowners may continue to shy away from adding large multifamily buildings nearby, but are open to adding units in their own backyards. This ‘missing middle’ housing, they believe, could help alleviate the housing crunch without sacrificing neighborhood look and feel while improving local amenities and transit. These findings show that broad-based support, especially from homeowners, provides the middle ground necessary to move the needle needed to bring relief to the housing crunch.”

Additional Zillow research has shown that “missing middle” homes tend to be more affordable. Renting a home in a 2-, 3-, and 4-unit building is less expensive than a single-family house in 42 of the largest 49 metros with available data.

Accessory dwelling units also seem to be becoming more popular. While “in-law units” and “cottages” are the most common listing terms nationally for secondary units on Zillow, the term “ADUs” rose to 5.7 percent in 2019 from 1.2 percent of listings in 2015. The share of listings mentioning a secondary housing unit in any way rose from 1.7 percent of all listings to 1.9 percent. And the shift to using the term “ADU” indicates that officially sanctioned secondary units are fast becoming a valuable selling point.