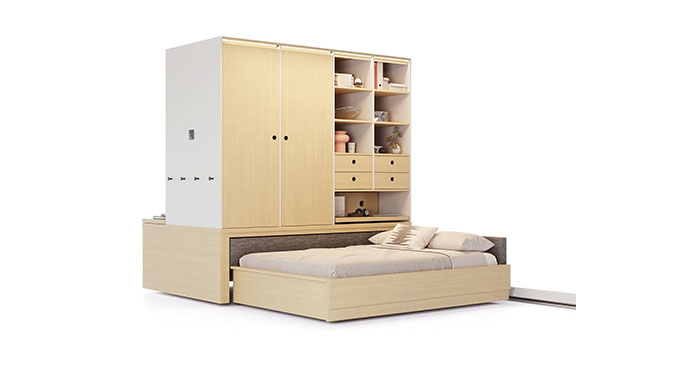 The mere words intrigue on their own: robot furniture.

But the realities of having a console that can transform a studio’s daytime living space into a cozy bedroom with the push of a button extend beyond the kitsch—and could provide a key answer to the growing trend of micro apartments.

That’s the hope of Ori Inc. founder Hasier Larrea, who has been developing the furniture of the future for nine years, beginning with a team at MIT. In 2011, they began contemplating the converging trends of smart home technology and shrinking apartment square footage in metropolises like New York City, Tokyo and Hong Kong.

“We began to ask, ‘What if we could animate inanimate objects to make spaces adapt to us, instead of the other way around?’” Larrea said. “We proved you don’t need as much space as you think. We changed the paradigm.”

After years of testing the concept in small pilot programs and, early on, a Boston Airbnb, Ori—a play on origami—is rolling out its largest project to date in Chicago, with its Studio Suites placed in 45 studio apartments in Avenir, a new, 196-unit River West high-rise.

The 450-sq.-ft. studio apartments, which rent for approximately $1,700 to $1,800 per month, are anchored by the Ori console, with space for a television and living room trinkets on one side, a full-size bed and storage shelves on the other. On the television side, a small table pulls out, while the bed glides out from inside the unit upon command.

Residents can use a control panel, an app or a smart speaker to send the console along its track, which pushes the bed side against the wall to widen the living room area, or makes room for the bed.

Should the power go out, users can manually move the furniture with ease; it also has a safety feature that stops robotic movement if a person or object is in the way.

Four of the 45 studios equipped with the Studio Suites have leased since Avenir opened Feb. 1, the company said. It estimates that the Studio Suite allows the small apartment space to function roughly the same as a 700-sq.-ft. apartment.

Avenir’s developer, Tandem, began working with the Boston-based Ori Systems three years ago, testing out the Studio Suites in an apartment in its MODE Logan Square redevelopment. When Tandem saw the potential, it worked with architects to tailor Avenir studios to optimize the Studio Suite’s functions, said Jeffrey Hreben, Tandem’s development manager.

“This is an opportunity to really push the boundaries of space needs,” Hreben said. “There’s a new class of renter that has a little more imagination and doesn’t need a dining room set they use a couple times a month if they can make better use of the space.”

As a boutique, all-encompassing firm in Chicago, it was easier for Tandem to jump at the chance to build apartments specifically for Ori furniture, Hreben said.

“Small firms are more nimble,” he said. “So we’re able to capitalize on opportunities and make decisions more quickly.”

To Larrea, the Ori Studio Suite solves three key issues for studio dwellers: the lack of separate spaces, having a living space with seating for guests, and a need for more storage.

“During our research, a couple told us they called studios ‘divorce apartments,’ because when one person gets angry, the only place they can go is the bathroom,” Larrea said. “If you have friends over for dinner, people are literally sitting on your bed.”

Avenir marks a significant tipping point for Ori, Larrea said, and the company will begin to move from the small-scale pilot projects to bigger partnerships like its work with Tandem.

“It’s becoming so much easier for people to make that kind of leap, to get more confidence (in the product) and realize this isn’t just a gadget,” Larrea said. “It’s something that can become standard.”

Ori hopes to debut more Avenir-sized partnerships this year as it develops more robotic furniture. Currently, its collection also includes the Pocket Closet, with shelves that move to create a walk-in closet, and the in-development Cloud Bed, which sends mattress and frame rising to the ceiling to reveal a couch.

Already, Ori is expanding its reach in Chicago. In the record-setting NEMA Chicago—which also has a joke-telling robotic greeter named Charley—Studio Suites are available for tenants to rent for an additional $350 per month, on top of their lease, although no one has taken advantage of the offering yet. Studio apartments in NEMA start at $1,926 per month.

Ori is also in continuing discussions with Ikea on how to scale its smart furniture for the masses. While the Rognan line was initially set to debut this year, Larrea said the project is still in its final stages of development.

In the meantime, expect to see Ori popping up in a growing number of apartments, he said.

“Now that developers can see the building in Chicago and realize this is not a prototype,” Larrea said, “these robotic products are ready for prime time.”