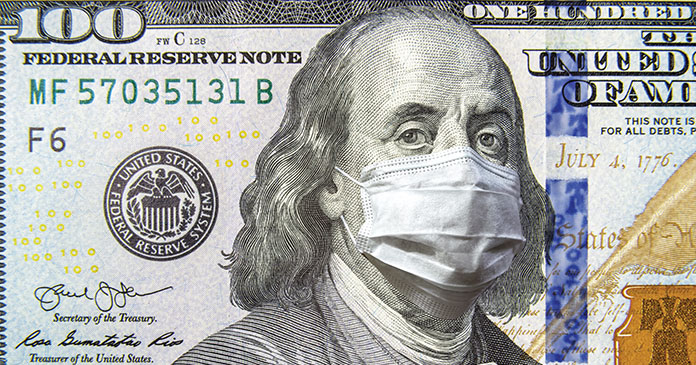 I live in California, whose governor, Gavin Newsom, in March issued Executive Order N-33-20. The order requires Californians to shelter at home unless they are involved in any of 16 different infrastructure sectors—or seeking medical care or buying food or prescription drugs. Although Newsom did not specify other exceptions in his executive order, the state government’s Web site lists banks, laundromats, and gasoline stations as businesses that are allowed to remain open. The executive order is in place indefinitely.

While people like me are fortunate that we work mainly in front of a computer and can do so at home, the majority of Californians are not so lucky. Other retailers are shut down, and those include bars and restaurants, with restaurants (mercifully) allowed to do take-out. Governors of Illinois, New York, Louisiana, Pennsylvania, Michigan, Connecticut, Oregon, New Jersey, Delaware, Nevada, Kentucky, Massachusetts, Ohio, and Indiana have imposed similar restrictions. Interestingly, of the 15 states with such orders, 12 have Democratic governors. Only three—Massachusetts, Ohio, and Indiana—are Republican. (The nationwide split is 24 Democratic governors and 26 Republican.)

These governors have badly overreacted. There is good, if arguable, evidence for the view that the risk of the coronavirus is much smaller than Newsom and other government officials have claimed. But there is no uncertainty about the fact that the damage these restrictions will do to the U.S. economy is huge. And remember that while “the economy” is an abstract concept, 330 million humans are not. The damage to them is already real, and will increase. There are good and bad ways to recover from the recession that is almost certainly upon us as a consequence. Fortunately, the Federal Reserve looks as if it will engage mainly in good ways. Unfortunately, many of the solutions being proposed by Congress and President Trump at the time of this writing (March 24), look to be mainly bad.

Looking at the evidence

Many commentators are saying that even if such grim statistics turn out to be right, it’s worth it because without these measures a large percent of us will be infected. And even if 1 percent of the infected died, that would mean over 1 million American deaths. Is that close to likely? No. Let’s look at some evidence.

When Governor Newsom announced his executive order, he claimed that without his measures, 56 percent of Californians would have the COVID-19 disease within eight weeks. He was vague about how he reached that number, but presumably he was doing what various epidemiologists have been doing for the last month: noting that the number of people infected seems to double every five to seven days. Here’s how George Mason University economist Tyler Cowen put it in a March 18 EconTalk interview with Russ Roberts:

One striking fact about all of these events is: I think it really drives home the difficulty for people in thinking in exponential terms. So, you and I have both talked about the importance of economic growth, compounding returns over time, having an economy growing at 3 percent is much, much better over time than having an economy growing at 1 percent: how hard it is for people to grasp that. That’s old news to the two of us.

And, here we have a totally new event where, by some estimates the number of actual cases is doubling say every 5-7 days in many parts of the country or world. Yet, right now it doesn’t actually “look” that terrible, and there are many people who have coronavirus but no symptoms, and they’ll probably just be fine.

But, nonetheless, if something is doubling every 5-7 days, some very bad events are not so far away. But, because they’re not vivid, people, including a lot of economists I know, they’re not able to make that mental leap. And, I think my background with thinking about economic growth is a significant reason why I think I’ve seen some of the dangers here coming.

Math is a constant

I’m surprised that Cowen knows economists who can’t make a “mental leap” from one kind of compounding to a different kind: the math is the same and is not complicated. But one of the most important words in the last-quoted paragraph above is “if.” It is absolutely true that if the incidence of the coronavirus doubles every five to seven days, we will be in serious trouble. But there is strong evidence that far fewer than 50 percent of Americans will get the virus. My own estimate is that it won’t exceed eight percent.

Here’s why. There’s a strong piece of evidence hidden in plain sight that is as close to a laboratory experiment as we’re likely to get quickly: the case of the Diamond Princess cruise ship. On February 4, 10 passengers on that ship were diagnosed with COVID-19. That same day, the ship was quarantined in Yokohama, Japan, and apparently all 3,711 passengers and crew were tested. The result: As of March 16, at least 716 of those aboard had tested positive. (I don’t understand why Wikipedia says “at least.” Is it many more? I don’t know.) Of those who tested positive, only 8 people have died so far. That means that about 20 percent of those on board were infected and that 1.1 percent of those people died. Recall that when one gets the coronavirus, there are no symptoms for at least a few days. Recall also that when you have 3,711 people on even a large ship, they’re living in close quarters. So whoever got the virus first on that ship had a chance to infect other people and those other people had a chance to infect others and so on, before the disease was spotted. The Diamond Princess was, in effect, a floating Petri dish.

What that means is that in our normal society, even with just voluntary social distancing, which Newsom and the other governors hardly gave a chance, the rate is likely to be well under 20 percent. Let’s say it’s eight percent, which I think is high. How about the fatality rate for those who get the disease? People who go on such cruises in late January and early February are likely to be on the elderly side. The crew is probably young, but probably constitutes no more than 25 percent of the people on board. We know that the fatality rate for the 60s and up who get the disease is a multiple of the rate for people under 40. And the median age in the United States is 38.2. So the fatality rate among people who get the disease in our larger society is likely to be well under the 1.1 percent for the ship’s passengers. Let’s say it’s 0.5 percent. Applying those numbers to the U.S. population of 330 million, we get 26.4 million people with the disease and 132,000 deaths. That’s large. But put it in perspective. It’s not even twice an atrocious flu season. The worst we had in the last four decades was 80,000 American deaths from the flu in the winter of 2017-18. Did you think of “sheltering in place” that winter? I didn’t either.

The sooner the mandatory sheltering is ended, the better. Those of us who are on the elderly side—I’m 69 and my wife is 70—should, to be sure, be super-cautious for at least the first few weeks. Others will be, too. It’s simply absurd to think that the vast majority of people will choose to go for the next few months without any precautions. Meanwhile, these people, especially younger people, need to be allowed to get on with their lives.

Let’s say you’re unconvinced. Notice that if the numbers are as bad as the extreme advocates say, then sheltering in place doesn’t do much anyway: it just “flattens the curve,” so that the health care system is not overrun. But wait. That’s crazy. A standard principle in economics, operations analysis, and, I bet, engineering is that if you have a bottleneck, you go after the bottleneck.

Is the problem that we don’t have enough testing kits so we can know who has the disease? Then produce more testing kits, which is easy if you get the Centers for Disease Control out of the way. The CDC delayed the kits for at least a month, which is a crucial loss of time. Also, President Trump should override the FDA’s fatal decision to bar at-home testing kits, for reasons that George Mason University economist Alex Tabarrok cogently explains.

Is the problem that we don’t have enough ventilators? Then produce more. And one thing to clearly avoid is what President Trump did: sign an executive order making higher-than-usual prices—which he and others call “price gouging”—a crime. Ironically, the executive order also goes after hoarding, which, of course, is what many people will do if they can’t charge higher prices. We need people to make a profit producing face masks and ventilators. The good news is that 3M, Ford, and GE Healthcare are working to produce respirators. Their public-spiritedness, which, wonderfully, seems to have become the norm for U.S. firms during this crisis, will probably carry us through despite Trump’s price controls. But when the problem is too little production of an item, it rarely makes sense to prevent people from making other items, which is what “shelter in place” entails.

Getting the economy on track

Which brings me to those other items. If we end the social confinement, how do we kickstart the economy? Millions of businesses are on the edge financially in normal times, having a cushion of one or two months of funds to carry them through slow periods. It’s quite conceivable that a million or more businesses will go under. That means that the supply of goods and services might be slow to respond. That, in economics, is called a problem of aggregate supply.

What about aggregate demand? First, the problem is not one of aggregate demand when governments have dramatically reduced supply. Second, if aggregate demand does need to be pumped up, the Federal Reserve can do that by printing money. I’m not saying that it should. But if it prints money, it doesn’t give it away: instead, it gets bonds in return.

By contrast, a large part of the bill currently winding its way through Congress gives people money. If the reason is to pump up aggregate demand, as Jason Furman, formerly chairman of President Obama’s Council of Economic Advisers, advocated, that makes no sense. There might be other reasons for the feds to give people money, but maintaining aggregate demand is not one of them. We already have a huge and growing federal debt. The parts of the bill that lend money to companies might make sense. At least the government will get a fair amount repaid, as it did after the 2008 financial crisis.

If the government wants to help individuals, a better way would be to announce that it will lend individuals up to 60 percent of the federal income taxes they paid in 2018. This will also help small businesses, many of which are individual proprietorships. The interest rate could be five percent, with accumulated interest until one year from now, and then six years to make payments after that. Some individuals would default. But the IRS is a pretty effective collection agency. Lending rather than giving money would cause each potential borrower to ask, “Do I really need this money? Is this a good idea?”

Put at its simplest: The coronavirus has caused a lot of hardship and tragedy. But in our desire to make things better, we shouldn’t forget basic economics.

Author David R. Henderson is a research fellow with the Hoover Institution. He is also a professor of economics at the Naval Postgraduate School in Monterey, Calif.

Multifamily housing construction down in April

ABOUT US
Yield PRO is one of a kind. It's multihousing news and strategy for owners and operators seeking to increase their asset value through streamlined processes and best practices. ﻿YP is the only independently-owned, nationally-circulated, exclusively-multifamily magazine in existence today.
FOLLOW US
© 2020 YIELD PRO MAGAZINE
Do NOT follow this link or you will be banned from the site!
MORE STORIES