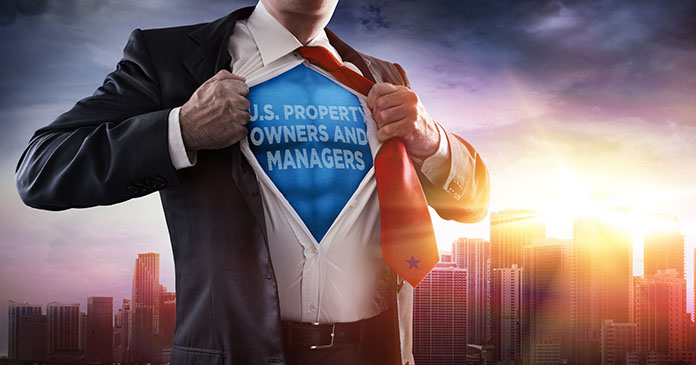 It is said that giving a man power is the truest test of character. Those I know, especially in real estate, were nearly all formed, not by the hand of power, but by the hand of adversity. It might be the lack of power that creates determination and grit. Crisis is often the carpenter of character, ingenuity and reinvention.

Apartment owners and operators are running their own scenarios, working though the numbers of Plan A, Plan B and Plan C. As are residents. And vendors. And everyone else.

What’s keeping us up at night is the same thing keeping an entire nation up at night.

Collectively and suddenly, we have been reminded that we live in a dangerous world. The vulnerabilities of our once-expanding globalization have come into painful focus. Our booming economy is falling slowly to its knees as we try to reverse-engineer how this happened.

There’s a challenge before us, but there isn’t a better place on earth to be. The best and brightest minds are focused and determined. And there’s enough good news to sustain a ray of hope as good news continues to trickle in.

In just the time it’s taken to produce this issue, the estimated mortality rate from COVID-19 has dropped from a rough guess of 2 percent to .66 percent. Hydroxychloroquine, Z-pack and other drugs are showing promise in treating the virus. Many health workers in high exposure settings are already taking hydroxychloroquine (malaria pills) as a prophylactic against the virus.

The now infamous researcher Neil Ferguson of Imperial College, London, has said that containment and other strict actions have moved the country toward the lower end of his model’s range of mortality outcomes, saving well over a million lives.

Researchers analyzing the impact of the 1918 Spanish Flu found a correlation in implementing non-pharmaceutical interventions (NPIs) with low mortality and high economic growth. “NPIs play a role in attenuating mortality, but without reducing economic activity. If anything, cities with longer NPIs grow faster in the medium term,” said researchers.

It’s a dangerous world. We can’t change that fact. What we can change is our response. Spring. Passover. Easter. Celebrations of renewal are on the horizon.

My faith says, “let not my heart be troubled.” It also tells me to roll up my sleeves and get to work.

A new day in multifamily housing

What a difference an issue can make. What was important at the turn of the year is now usurped by lock-downs, daily briefings and a healthy dose of uncertainty.

Trade shows, sporting events, travel and anything other than essential movement is on hold until further notice in many parts of the country.

Roads, offices and shops have been emptied, while our apartments are now operating at nearly 100 percent-full-time occupancy with residents sheltered in place. In a moment, our operational models have changed with line items such as utility consumption, projected delinquencies and more, set for an unprecedented spike.

We’re quickly heading for a bump in the road, even a detour, with regard to business operations. But it’s equally as important to remember, multifamily housing is accustomed to curve balls. Rent control, comfort animals, disparate impact. Many of us have made it through recessions, the ebb and flow of household formations and bearing the brunt of the blame for the housing shortage.

COVID-19 is unusual, but we are cut from the cloth of entrepreneurism.

We’ll find a way through. We always do.

If we at Yield Pro can help, please let us know. We speak to 25,000 of the brightest, hardest-working minds in the country—in one of the most essential businesses there is.

We’re already laying out the next cover, working title: The biggest recovery ever.