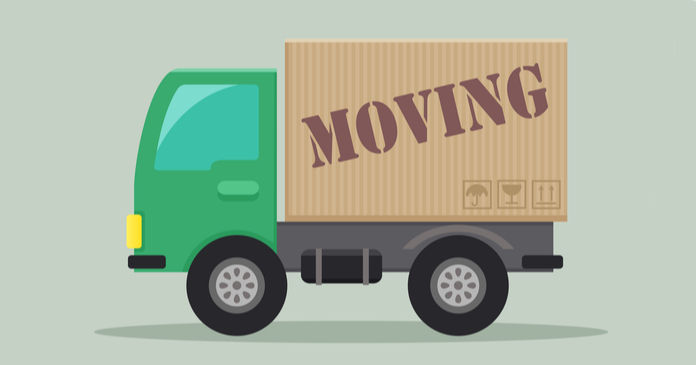 The COVID-19 pandemic and the changes it has caused in our lives are bound to have an impact on where people choose to live. A variety of sources have attempted to measure the impact on relocation plans so far and to project what the impact may be in the future. A survey of some of these reports follows.

What has happened so far

A recent survey by the Pew Research Center indicated that 3 percent of adults had moved, either temporarily or permanently, due to the coronavirus outbreak. By age group, those most likely to have moved were those aged 18 to 29, with 9 percent of respondents in this age range saying that they had moved due to coronavirus. Given the shutdown of colleges in the spring, it is not surprising that this age group would be most likely to move.

The reasons people stated for moving are illustrated in the first chart, below. Moving to a place where they felt they were less likely to contract the virus was the reason given most often, with 28 percent of movers citing this reason. Money related issues or the loss of a job were cited by a total of 18 percent of respondents. 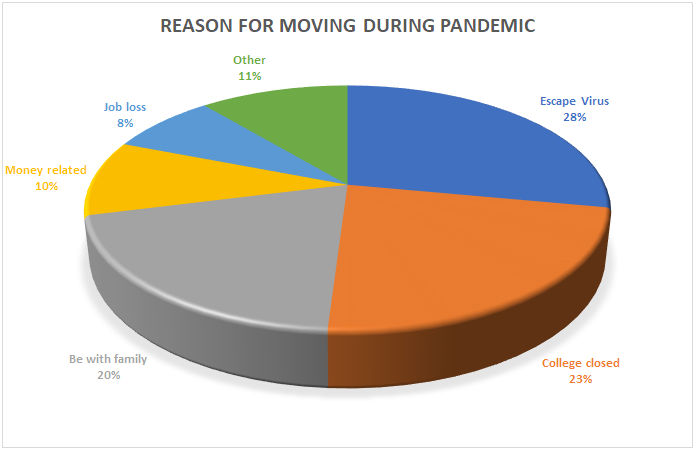 When asked where they went, by far the largest share, at 61 percent, said that they moved into a family member’s home. Given the high number of respondents who cited either that their college closed or that they moved to be with family, this is not surprising. Other reasons cited by survey respondents are given in the second chart, below. Interestingly, only 9 percent of respondents who moved characterized their new home as being “permanent”. The others could easily return to their old neighborhoods if an effective treatment or vaccine for the virus is developed. 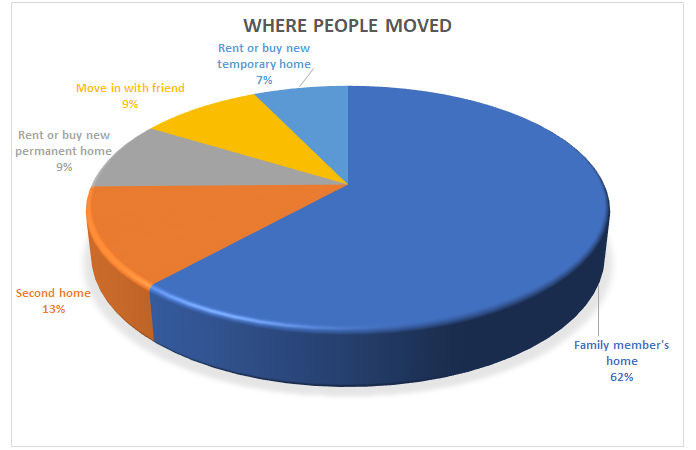 A second study from HireAHelper, a company which provides an online moving marketplace, looks at where people are moving to and where they are moving from. The survey stated that 15 percent of the people who had moved between January and June had done so for COVID-19 related reasons.

The HireAHelper survey was different from the Pew survey in that the former allowed respondents to give multiple reasons for what was it about the COVID-19 pandemic that caused them to move. The top responses were:

The HireAHelper study also looked at where people were moving from and where they were going. It did this by looking at the difference between the numbers of people contracting to move out of an area and those contracting to move into an area. States with the highest ratios of net move-outs included New York, California, Illinois, Washington DC and Minnesota. States with the biggest move-in differentials included Idaho, New Mexico, Delaware, South Carolina and Maine.

HireAHelper noted that about 10 percent of the people in the United States moved in all of 2019, but that moves were down so far this year due to COVID-19 inspired restrictions.

Quicken recently surveyed 1000 Millennial renters to assess their relocation plans over the next 12 months. The survey found that 37 percent of respondents were considering leaving their cities over the next 12 months and 48 percent of those respondents cited COVID-19 related reasons for doing so. Another 16 percent said that they were undecided whether to leave. However, it should be noted that the time-breakdown of the 37 percent who are considering leaving has 16 percent saying that their move would take place within 6 months and 21 percent saying that the move would take place between 6 and 12 months in the future. The longer the move is delayed, the more opportunity there is for the person to change his mind.

The report also noted that 17 percent of respondents had already changed their living situations since the pandemic hit. Many of these, 59 percent, stayed in the city where they lived and either moved to a less expensive apartment or moved in with family or friends. Of the respondents who said that they had left the city temporarily, 69 percent said that they were still paying rent on their apartments.

Only 1.3 percent of respondents reported that they had left the city permanently.

Another report by Apartmentlist.com attempts to discern renters’ relocation plans by examining where apartment searchers currently reside and where they are looking for apartments. It looked at searches for the 50 largest metro areas and compared the results for the April to August period this year to the same period last year.

While these figures would imply that the pandemic did not change apartment search patterns much, they represent an overall average, and the results in different metro areas differ significantly. For example, San Francisco saw its fraction of inbound searches fall from 47.2 percent in 2019 to 35.6 percent in 2020. This trend was seen to a lesser extent in other tech hubs. By contrast, smaller cities like Richmond, Va. and Sacramento saw their fraction of inbound searches rise.

The report concludes that the pandemic may be causing large urban hubs to become less attractive relative to more affordable smaller cities, particularly given the rise of remote work. However, the impact of this shift in is only starting to be felt.