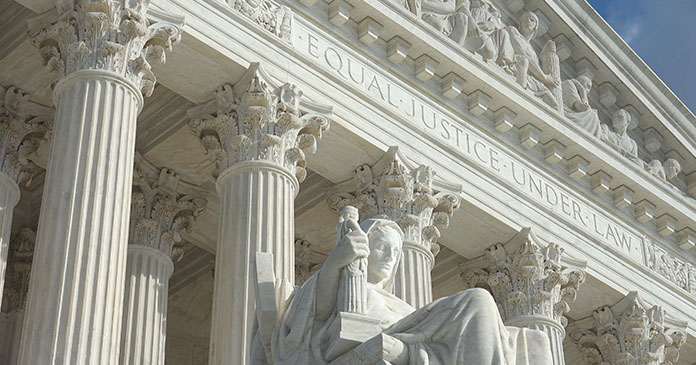 The scope and duration of the stay-at-home orders issued by state governors this year are unlike any past pandemic orders in American history. So it is not surprising that several hundred lawsuits have been filed around the country to challenge their application in various contexts.

A few of those cases have made their way to the U.S. Supreme Court, where plaintiffs have asked for extraordinary action by the court for relief either from the orders or the terms of reopening. Unlike lower courts, the Supreme Court can choose which cases it takes and which it does not, and so far has declined to hear any of these. At the end of July, however, four of the nine justices wrote or joined brief opinions concerning the court’s denial of a case from Nevada involving church services, Calvary Chapel v. Sisolak.

What they said may guide lower courts soon, particularly the comments of three justices calling into question an old precedent that lower courts have relied on to uphold many lockdown and reopening orders.

To date, the lower courts mostly have dismissed cases against coronavirus-related orders, considering them legitimate, if extreme, uses of state governments’ traditional authority to protect public health and safety. Judges have appeared wary of second-guessing state officials in the context of the pandemic. But as the lockdowns and other unusual regulations continue, there is some evidence that this view may be shifting.

In a small number of cases, emergency orders issued by governors or administrative agencies have been dissolved as exceeding the powers granted to them by state legislatures. And in another group of cases, courts have stopped officials from arbitrarily discriminating among different types of activities, particularly when it comes to freedom of assembly or religious liberty. That latter scenario captured the attention of the four dissenting justices in the Calvary Chapel case.

The church petitioned the Supreme Court for emergency relief from the Nevada governor’s order limiting in-person religious services to 50 or fewer people. The church argued that Nevada was unfairly discriminating against religious organizations, in violation of the “free exercise of religion” clause of the First Amendment, since other businesses in Nevada, including casinos, were permitted to operate at 50 percent capacity. The upshot is that large church spaces were limited to 50 people, while shopping malls, casinos and other gatherings were allowed to host vastly more.

Justices Neil Gorsuch, Samuel Alito, Brett Kavanaugh and Clarence Thomas all stated the view that the court should have accepted the case to decide whether Nevada was exceeding constitutional limits on its authority. Justice Alito, writing for himself and Justices Kavanaugh and Thomas, wrote: “States and their subdivisions have responded to the pandemic by imposing unprecedented restrictions on personal liberty.” While the initial response by officials across the country may have been justified, given the uncertainty surrounding an emergency situation, he urged that the emergency “does not give Governors and other public officials carte blanche to disregard the Constitution for as long as the medical problem persists.”

Justices Kavanaugh and Gorsuch also wrote their dissents from the denial. Justice Gorsuch lamented that “the world we inhabit today, with a pandemic upon us, poses unusual challenges. But there is no world in which the Constitution permits Nevada to favor Caesars Palace over Calvary Chapel.” Justice Kavanaugh suggested that government power is wide during a pandemic, while disparaging Nevada’s order: “COVID–19 is not a blank check for a State to discriminate against religious people, religious organizations and religious services.”

Justice Alito’s opinion is striking for another reason. It went beyond special concern for religious liberty, expressing doubt about the 115-year-old precedent on which most lower courts have relied on to dismiss challenges to lockdown or reopening restrictions.

In Jacobson v. Massachusetts (issued in 1905), the Supreme Court held that under some conditions, a mandatory vaccination order does not violate the Fourteenth Amendment’s protection of liberty. Since the outbreak began, Jacobson has been the go-to case for judges who have upheld lockdown orders. If the Constitution sometimes allows mandatory vaccination, so the logic goes, then restrictions on travel, or business closures or sheltering at home are also okay.

But Justice Alito writes that “it is a considerable stretch to read the decision as establishing the test to be applied when statewide measures of indefinite duration are challenged under the First Amendment or other provisions of the Constitution not at issue in that case.” He concludes that the court has “a duty to defend the Constitution, and even a public health emergency does not absolve us of that responsibility.” Justice Alito’s dissent was joined in full by Justices Thomas and Kavanaugh. That simple statement is a strong signal to the lower courts that they should not read more into the Jacobson precedent than what is there and ought to employ more skepticism of state governments’ remarkable assertion of power during this period.

It’s important to note that the Supreme Court’s decision to reject the Calvary Chapel petition does not mean the court will not take up and decide the constitutionality of various lockdown or reopening plans in time. The court typically rejects emergency applications for extraordinary action because the underlying merits of the cases were not fully considered by the lower courts.

As the COVID-19 emergency continues to grind on, however, it will become increasingly necessary for the judiciary to clarify for state officials the constitutional limits of their power. The four dissents from denial in the Calvary Chapel case suggest increasing engagement on these questions by the Supreme Court.