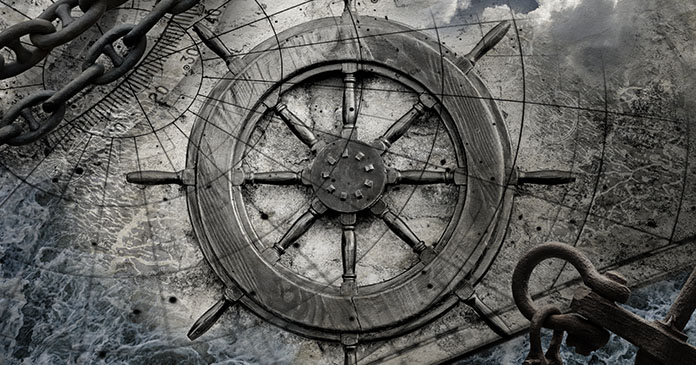 A ship once found itself lost at sea. After a time, the crew’s drinking water ran seriously low. The parched sailors were certain they would die until, miraculously, another ship came within view.

The distressed ship signaled to the other: Water. Water. We die of thirst.

“The answer from the friendly vessel at once came back: Cast down your bucket where you are.

A second time, the signal, Water, send us water! went up from the distressed vessel. And was answered: Cast down your bucket where you are.

A third and fourth signal for water was answered: Cast down your bucket where you are.”

With no other options, the captain followed the other vessel’s direction and dropped his bucket into the waters below.

Astonishingly the resulting water from the raised bucket was not saltwater. At once the crew quenched their thirst on fresh water from the Amazon River. The lost ship had unknowingly drifted to safety.

This story was delivered by Booker T. Washington in his 1895 speech about race relations. Its power and meaning extends to the whole of life, even in 2020.

In today’s rapidly changing world it’s easy to believe we are dying of thirst. The last gasp of a pandemic. Lockdowns. Property loss from fires and riots. Stark division on whether to hold steady the Republic as it was brilliantly designed centuries ago—or start anew. The diversions are many, all cause for angst.

Such noise makes it easy to forget there is fresh water below our feet.

What a difference eight months and a free market can make. It was then the administration was rolling back regulations. Tax reform lowered corporate taxes. Businesses were untethered to compete worldwide. Humans were free to move.

New data from the Federal Reserve show that in the three years pre-pandemic, the economy had begun to deliver prosperity for all Americans, but especially for those in lower income groups (Wall Street Journal report summary). Overall household median net worth rose 18 percent from 2016 to 2019. White households rose 3 percent; black households rose 33 percent and Latino households grew 65 percent. At the same time, black unemployment fell to the lowest rate ever recorded, 6.8 percent in December.

And while there are many factors in creating a roaring economy, reinstating a free market (absent C19 restrictions) and a steady roll-back on onerous regulations promise to restore our nation and its prosperity and to reinvigorate the economy. Walking back just the 20,642 new regulations from the previous administration alone frees hundreds of billions of dollars in costs added to everything from housing to healthcare (Heritage Foundation).

“The characteristic mark of economic history under capitalism is unceasing economic progress, a steady increase in the quantity of capital goods available, and a continuous trend toward an improvement in the general standard of living.” wrote economist Ludwig Von Mises.

“In this age of entitlements, it is refreshing to be reminded of the basis of a free society, which is personal responsibility and hard work,” said Brad McCoy administrator and co-owner of Twinbrook Assisted Living Apartments in a letter to me last month.

“Unfortunately, much of society seems to think that they are owed corn even if they didn’t plant any. This belief seems to be contagious and is spreading quickly in the form of subsidies for everything from food to daycare to housing. If worker bees decide to take it easy and let someone else do the work, we are in trouble,” said McCoy.

Brad writes what workers bees fear in the quiet of night. Yet, if human behavior is predictable, history may save us.

“It was America’s moral order, then, that sustained America’s social order,” wrote Russell Kirk in The Roots of American Order.

“Even though class, family, and community were enfeebled west of the Alleghenies; even though the institutional Church might be reduced to circuit-riding preachers there; even though the common man of the West seemed interested chiefly in his own material aggrandizement—still he read his Bible, accepted as good the political framework which he inherited from the Atlantic seaboard and from Britain, and took for granted a moral order that was his custom and his habit. That is why the American frontiersmen and backwoodsmen and entrepreneurs of the vast newly-opened country were not men ‘in a state of nature.’ And that is why the American democracy was not a democracy of degradation.”

May history quench our thirst and lead the way to earned prosperity.