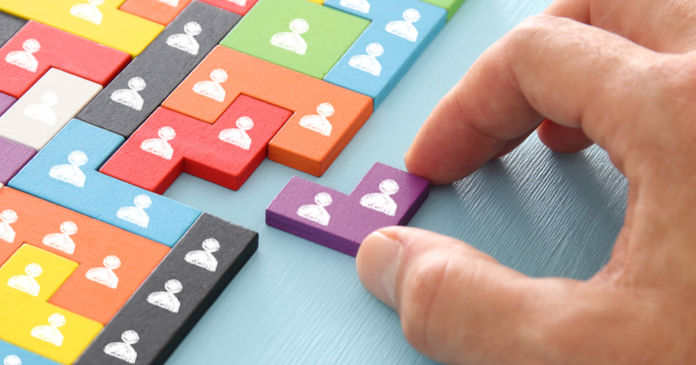 Two recent reports from the Bureau of Labor Statistics (BLS) describe the current labor situation. They are the Employment Situation Report for October and the Job Openings and Labor Turnover (JOLT) report for September. They show a recovering labor market.

The BLS reported that the US unemployment rate dropped to 6.9 percent in October as total employment rose by 638,000. At the same time, the labor force participation rate increased 0.3 percent to 61.7 percent of the adult population. There are now 123.6 people employed full time in the United States and another 26.2 million employed part-time.

The BLS also reported more detailed employment information on two job categories of interest to the multifamily industry. These are employment in rental and leasing services for real estate and employment in construction of residential buildings. Seasonally adjusted figures for these categories are shown in the first chart, below. 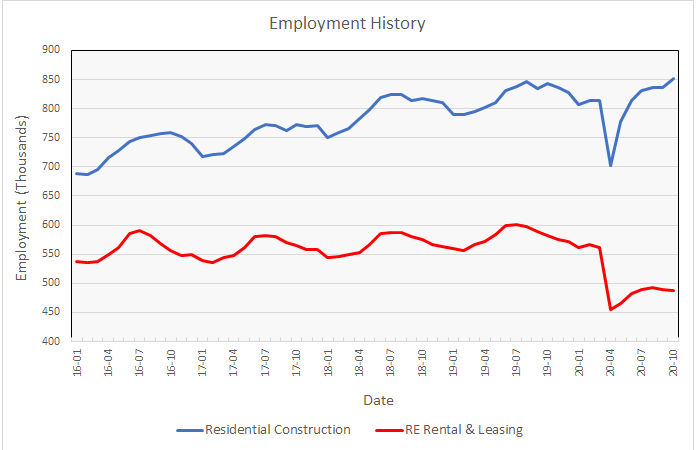 The chart shows that residential construction employment has rebounded from the sharp decline it experienced when the COVID-19 inspired lockdowns were imposed earlier in the year. While the employment figures for September and October are still considered preliminary, they show that residential construction employment is up 1.8 percent for the month and up about 1 percent compared to October 2019.

By contrast, employment in rental and leasing services for real estate is still significantly lower than it was before the shutdowns. Employment in this category was down 0.5 percent for the month, following the usual seasonal trend of employment dropping in the fall. Employment was down 16.2 percent compared to October 2019, indicating how far this jobs category has to go before it can be said to have recovered from COVID-19.

The JOLT report shows that the overall private labor market has a high number of hires and separations even in a “normal” labor market, such as existed in 2019. The net gains or losses in employment are based on small differences between these two large numbers. The latest report shows that the labor market is continuing to chip away at the massive losses in employment which took place in March and April. This is shown in the first chart, below. 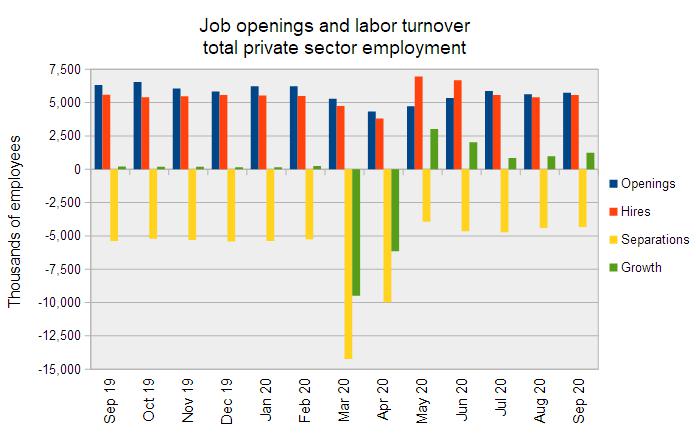 After the early surge in employment when the shutdowns were eased in May, employment growth slowed through July, but has recently picked up again. However, it is interesting to note that the number of job openings in the private sector economy is still about 11 percent below its average level in 2019. At the same time, hiring is only slightly above its average for 2019. Therefore, the recent surge in employment growth is being driven by a significant decline in the number of separations rather than a surge in hiring. While overall separations in September were 18 percent below their average levels for 2019, involuntary separations (layoffs) were down 29 percent. It seems that employers are holding on to the employees they currently have.

The second chart shows the situation for the construction jobs market. It displays a similar pattern to that of the total private sector jobs market, with massive losses in March and April followed by a strong recovery in jobs in May. Job gains then declined through July, before picking up again in August and September. 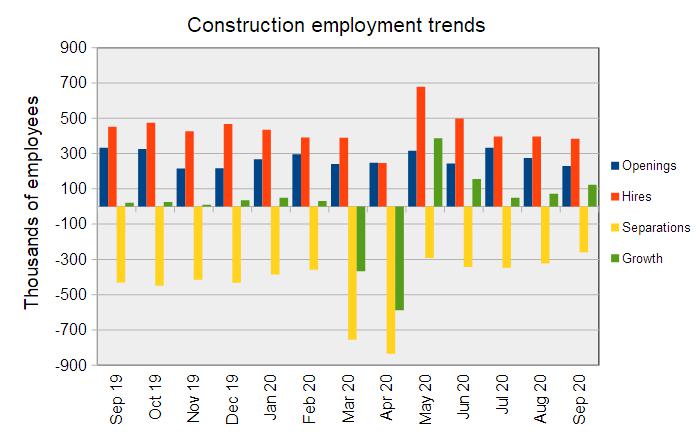 The real estate and rental and leasing (RERL) jobs category, which includes people who manage multifamily properties, experienced a net loss of jobs in September, according to the JOLT data. However, the data for August was revised so that the jobs loss originally reported for that month became a slight jobs gain. This is shown in the next chart, below. 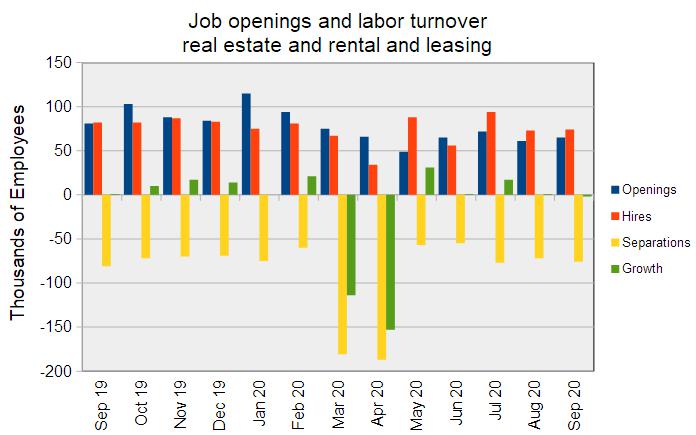