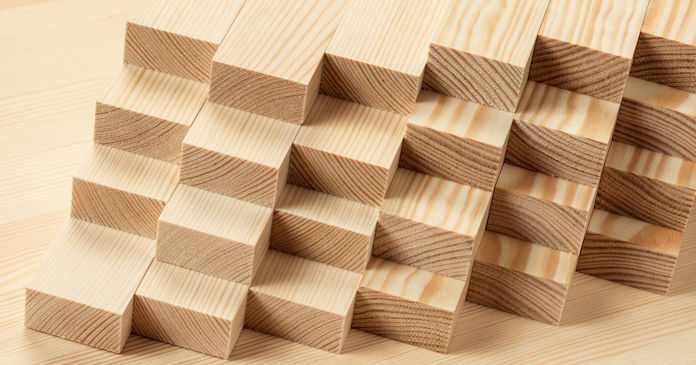 The Bureau of Labor Statistics (BLS) released its producer price index report for December 2020. It showed that the BLS price index of materials and components for construction was up 0.8 percent from November, seasonally adjusted. It was 5.2 percent higher than its year-earlier level.

For reference, the changes in these indices compare with a 1.4 percent rise in the all-items consumer price index (CPI-U) for the 12 months ending in December. The CPI-U was up 0.4 percent for the month.

Yield Pro (PRO) compiled the BLS reported price changes for our standard list of construction commodities. These are commodities whose prices directly impact the cost of constructing an apartment building. The two right hand columns of the table provide the percent change in the price of the commodity from a year earlier (12 Mo PC Change) and the percent change in price from December 2020 (1 Mo PC Change). If no price data is available for a given commodity, the change is listed as N/A.

Last month, we reported that softwood lumber prices, while officially down for the month, were again on the rise by late November. Prices continued to rise during the month of December and the BLS reported prices were up 12.2 percent for the month. However, in early January, softwood lumber prices backed off slightly from the highs they reached in late December. The Random Lengths Lumber futures contract, which traded as high as $934 in 2020, is priced at $655 for March 2021 deliveries and is under $600 for deliveries in May or later. The recent run-up in prices is being attributed to weather being unseasonably favorable to building activity for this time of year, along with mills shutting down for maintenance.

The price of soft plywood products continued to decline from its recent high in December. However, its price has recently tracked that of softwood lumber, but with a delay. If it continues this pattern, price increases may be ahead for this commodity. Prices of other wood products that we track have been relatively stable, although hardwood lumber has started to move up on recent months. This is shown in the first chart, below. 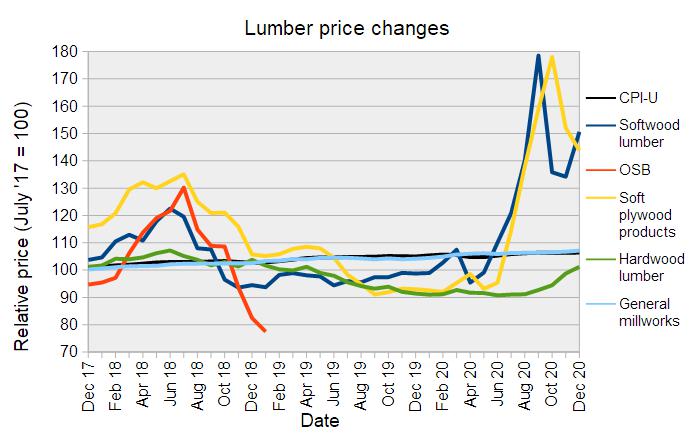 The second chart, below, shows the recent price history of several other construction materials. Copper wire and cable made the biggest jump this month, rising 5 percent. The price of copper has been rising rapidly since March and is now at its highest level since 2013.The only good news here is that copper futures seem to have stabilized with contracts out to September 2021 trading in a narrow range close to today’s price. The price of aluminum, which also had been rising rapidly since May, seemed to plateau in December. This may account for the drop in the price of power wire and cable, which was down 1.5 percent for the month. 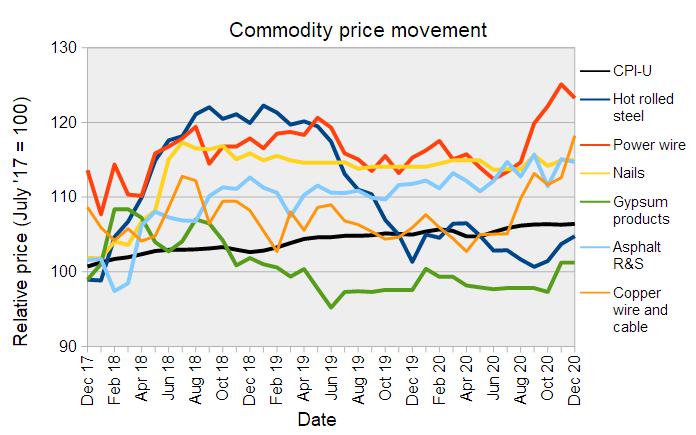 Price changes for several of the more finished goods from our sample are illustrated in the final chart, below. The prices of these items seem to be continuing their recent trend of growing at a rate that is slightly above the general rate of inflation in the economy 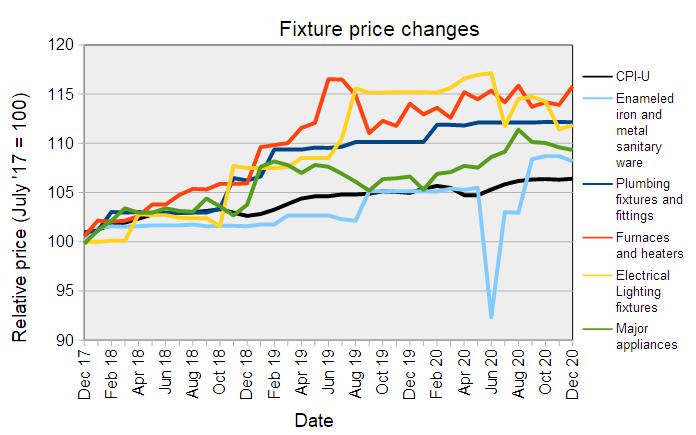