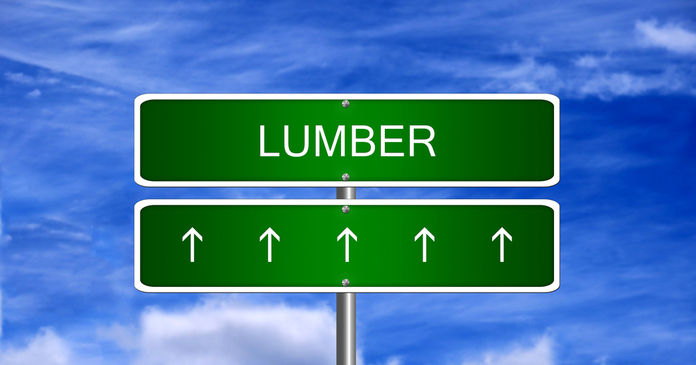 The Bureau of Labor Statistics (BLS) released its producer price index report for January 2021. It showed that the BLS price index of materials and components for construction was up 1.5 percent from December, seasonally adjusted. It was 6.6 percent higher than its year-earlier level.

Overall prices for processed goods for intermediate demand rose by 1.7 percent. The index was 3.1 percent higher than its year-ago level.

For reference, the changes in these indices compare with a 1.4 percent rise in the all-items consumer price index (CPI-U) for the 12 months ending in January. The CPI-U was up 0.3 percent for the month.

Yield Pro (PRO) compiled the BLS reported price changes for our standard list of construction commodities. These are commodities whose prices directly impact the cost of constructing an apartment building. The two right hand columns of the table provide the percent change in the price of the commodity from a year earlier (12 Mo PC Change) and the percent change in price from December 2020 (1 Mo PC Change). If no price data is available for a given commodity, the change is listed as N/A.

Lumber prices resumed their rise in mid-January. By early February, they exceeded the highs that they had reached in August 2020, with the Random Length Lumber contract price approaching $1000. For reference, this contract traded between $315 and $420 in 2019. It had dropped as low as $264 in March 2020 when the pandemic lockdowns were first imposed. Also of concern is the rise in the price of the Random Length Lumber futures contract. Contracts for May 2021 deliveries are now trading above $850, whereas they were under $600 just last month. Even the contract for March 2022 deliveries is trading at $700, indicating that the markets think that elevated lumber prices will be a reality for some time.

The price of soft plywood products followed its recent pattern of tracking the change pattern of framing lumber prices, but with a delay. The price rebounded in January and is up by nearly the same percentage over the last year as is the price of softwood lumber. Prices of hardwood products continued their recent rise while prices for general millworks are moving in line with the CPI-U. These trends are shown in the first chart, below. 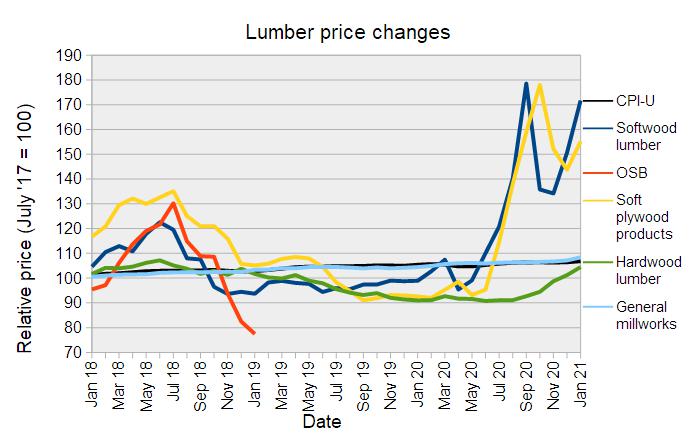 The rise in lumber prices is being attributed to the high level of construction activity going on, particularly now at what is usually the slow time of the year. Supporting this idea is the rising numbers of single family home starts and single family homes under construction, which are at their highest levels since the housing bust of a decade ago. The long term trends in these areas is illustrated in the chart, below.

The third chart, below, shows the recent price history of several other construction materials. Copper wire and power wire have been moving sharply higher recently, trailing only lumber for the highest rate of price growth over the past year of the commodities we track. 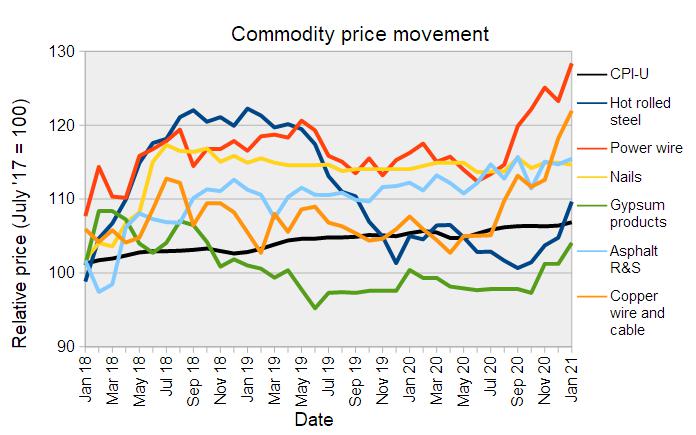 The price of copper, which seemed to have reached a plateau in December and January has been rising again in February. At the same time, futures contracts as far out as October 2021 are trading at about the same price as today’s market prices, indicating that no price relief is in sight.

The price of aluminum, has recently been following the same pattern as that of copper. It also seemed to stabilize in December and January, only to surge in early February. Aluminum is now trading at its highest level since 2018.

Price changes for several of the more finished goods from our sample are illustrated in the final chart, below. The prices of these items seem to be continuing their recent trend of growing at a rate that is slightly above the general rate of inflation in the economy as measured by the CPI-U. 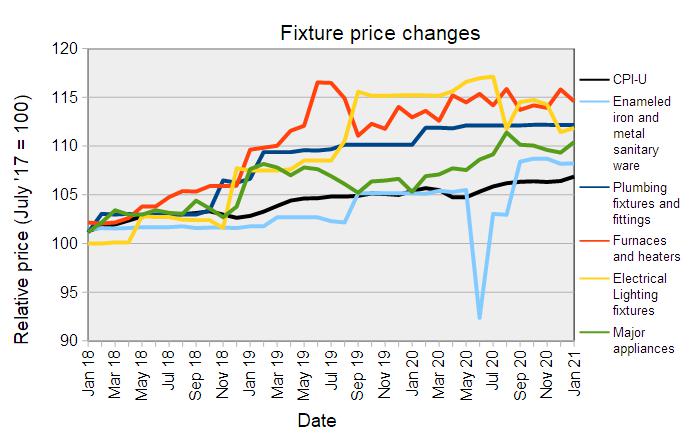