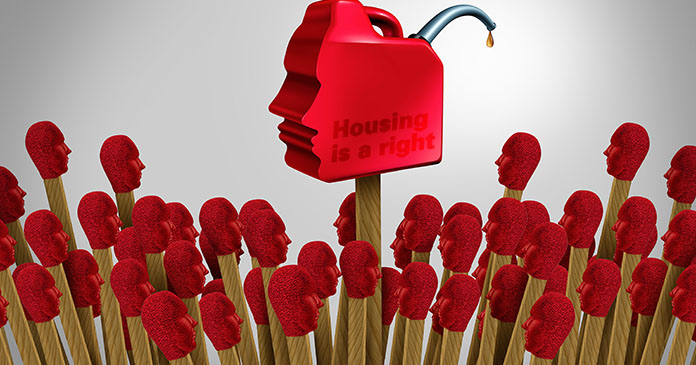 As the owner of a large portfolio of apartments across the country, Ric Campo, chairman of the board and CEO of apartment REIT Camden, has good visibility into where residents are paying rent and where they aren’t.

Campo, who is also chairman of the Housing Stability Task Force in Houston, says Houston has the strongest collection rates in his portfolio, even though it’s weaker than his other markets. The Camden portfolio was at 95.8 percent occupancy in September. At that time, Houston had the lowest occupancy of all of his markets at 93.9 percent after falling 200 basis points during the pandemic.

While Houston had the lowest occupancy, its delinquencies were only 0.19 percent in Camden’s portfolio. In Texas, Austin was 0.7 percent and Dallas was 0.7 percent. In California, Los Angeles was 6.46 percent and San Diego was 4.4 percent.

Why the difference? Campo thinks a lot of it has to do with political rhetoric.

“In California, the rhetoric is so bad there relative to the governor and the mayor of Los Angeles basically just saying, ‘Look, you don’t have to pay rent. Don’t worry about it. We’re not going to evict you,’” Campo says. “So you have more people there who just keep their money in their pocket and don’t pay.”

Campo says his collections are outperforming other apartment REITs on the coasts. He thinks political rhetoric also explains that.

“The reason they’re not collecting their rent is that they’re in these markets where landlords are bad,” Campo says. “So people are just not paying.”

Campo distinguishes between people who can’t pay and aren’t versus those who have lost their job or are facing economic hardship. “For the vulnerable people, we need to get them money,” Campo says.

At Camden, Campo says many residents who knew they were in trouble left early in the pandemic. His portfolio lost about 100 basis points of occupancy, which equals approximately 600 people.

“People immediately knew that they couldn’t pay their rent,” Campo says. “They immediately said, ‘Oh, I’ve got a problem. So I better move in with my parents or friends. I better economize because I’ve lost my income.’ They changed their venue because they needed to do that.”

Campo says eviction moratorium from the Centers for Disease Control and different local governments around the country have created a moral hazard. “We’re letting people stay in their apartments and they’re running their debt up,” he says. “If they can’t pay and never can pay, they still have a place to stay. But they ruin their credit for the future.”

While the eviction orders may be keeping people in their apartments now, Campo says they’re creating problems down the road. “The CDC order and all these individual orders around the country created a time bomb of debt ticking on people who if they can’t pay now, they’re not going to be able to pay in one month, two months, three months, five months or whenever,” he says. “And that’s just awful for them.”