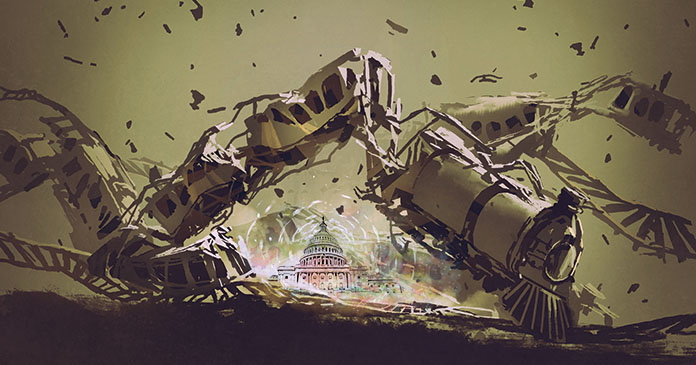 President Biden and progressive allies are advancing a historic $4.5+ trillion spending plan that would vastly expand the government’s reach into climate change, welfare policy, and just about everything else in between. To “pay for” their spending ambitions, at least in part, they’ve released a multi-trillion-dollar proposal for tax increases. These tax hikes include everything from higher income taxes to increasing the corporate tax rate to upping taxes on nicotine products.

Biden claims this tax-and-spend campaign, if implemented, would “build America back better” and revitalize our economic system. Yet, a recent study suggests that it would actually do the opposite—and have three devastating effects on the U.S. economy.

The new research is authored by free-market economists Dan Mitchell and Robert O’Quinn and was published by the fiscally conservative advocacy group the Club for Growth. The authors applied past academic research and analysis by the nonpartisan Congressional Budget Office to the new proposals and estimated how they would impact economic growth, worker wages, and living standards.

The findings are bleak. Here are the three main ways Biden’s plans would hurt, not help, Americans’ economic fortunes.

For one, the study concludes that the Biden tax-and-spend proposals would lead to $3 trillion less in total economic output over the next decade. This figure is abstract, but think of it like this: trillions of dollars’ worth of goods and services will never get produced for the American public to consume.

Similarly, workers would suffer, not prosper, under the proposal. The economists find that workers would see a $1.6 trillion loss in compensation over a decade. That’s more than $10,000 in lost earnings per worker, on average.

When taking all the various aspects of the plan into account, the study concludes that lifetime living standards would drop 4 percent for young workers. This is analyzed using their projected consumption levels of goods and services.

Why such abysmal results?

It might not be immediately apparent why a multi-trillion-dollar spending scheme would hurt the economy when, after all, it’s intended as a stimulus. The study’s authors explain just that.

“This massive spending increase will divert resources from the economy’s productive sector, and it will be partly financed by punitive, class-warfare taxes that penalize work, saving, investment, and entrepreneurship,” they write. “This tax-and-spend agenda will accelerate America’s fiscal decline and undermine economic performance.”

Simply put, understanding the full impact of Biden’s multi-trillion-dollar proposals requires looking beyond the easily visible, first-order effects. Yes, some Americans would benefit from the various spending proposals or see cash windfalls from different subsidies and schemes. Yet, what proponents of big government get wrong is that they fail to look beyond the easily seen benefits of their proposals.

The resources allocated through these various schemes cannot be created out of thin air. Ultimately, redistribution schemes do exactly that: redistribute resources, not create them. A dollar spent on electric vehicle subsidies, for example, ultimately means less money invested or spent in the private sector.

Still, couldn’t the distribution lead to more productive outcomes? It’s unlikely, if not impossible. Under redistributive schemes, resources are allocated through politics and government bureaucracy; a recipe for fraud, and waste. However, when left to the private sector, resources are allocated according to their most profitable use, which ensures that they go to the places where they are in the highest demand.

And that’s not even mentioning the myriad economic consequences of the many new taxes proposed to accompany the spending. As authors of the study’s explain, the harm from such massive and punitive tax hikes would far outweigh any benefits of the spending itself.

Of course, don’t expect politicians like President Biden to acknowledge these economic realities any time soon. Promises of prosperity and cash-handouts for all are political winners, after all. Yet if these schemes come to fruition, American taxpayers and workers will be the ultimate losers.

June 27, 2022
PCCP, LLC has provided a senior loan to a joint venture between funds managed by Oaktree Capital Management, L.P. and Security Properties for the...