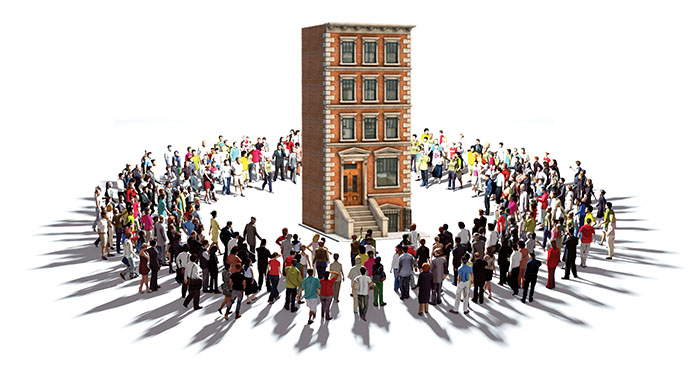 It’s not uncommon to hear about bidding wars for homes in today’s housing market. But “leasing wars” for rental units are popping up in some cities as demand for multifamily housing remains high.

Matt Scott, broker associate at residential real estate services firm Baird & Warner’s office in Naperville, Illinois, said in the eight years he’s been in the business, he hasn’t seen anything like the current environment.

Nine months ago, Scott said he was advising clients to make slightly below-asking rate offers. Not anymore. Rental rates in suburban Chicago areas have ticked up between 12 percent and 30 percent year-over-year, he added. Up to 20 families have expressed interest for a single rental.

Pittro said only about half of the rental concessions it had budgeted for have been used, and the property’s pro forma is about three months ahead of where it was projected to be.

Demand is coming from former homeowners who want to rent an upscale home by Lake Michigan, as well as people who had been living in downtown Milwaukee, about 5 miles away, but sought more space, Pittro said.

Navi Sandhu, vice president of finance and development at Fifield Cos., said the firm will be breaking ground soon on an apartment project in the Ojus neighborhood of Aventura, Florida. Since closing on the land in April, Fifield has been tracking rent growth at five comparable properties within 3 miles of where it will develop. Those properties have seen, on average, a 20 percent spike in rents in the past five months.

Sandhu said similar rent-growth stories are playing out in other markets Fifield develops in: Phoenix, Dallas and Denver, to a somewhat lesser extent.

“This is certainly more extreme than we typically see,” Sandhu said. But, she continued, construction costs are up anywhere 5 percent to 20 percent.

Pittro and others say demand seems equally high for urban and suburban apartments.

Ben Creamer, co-founder and managing broker at Downtown Apartment Co., said he’s seeing stiff competition for units in downtown Chicago, where he’s based. It’s a stark contrast to 2020, when Creamer said he had never seen pricing as low as it had been since DAC launched in 2009.

Studios in Class A buildings were available for $1,100 per month late last year, Creamer said. Today, those same units are fetching around $2,000.

“There’s a big demand to be close to various restaurants, parks, etc., and even if people aren’t in the office quite yet, there’s a plan for when they’re going, and being close to the office is still important,” Creamer said.

Units have gone for $200 above the asking rate in some cases, he added. Scott said some tenants have made offers to prepay six months’ worth of rent as a way to be competitive against other prospective renters.

Scott said a lot of individual investors in the Chicago market have been liquidating single-family rental assets, frequently selling those properties to an owner-occupier. That’s created less single-family rental inventory in the markets he works in, and more competition for the homes that are available.

Higher-priced single-family rentals, or ones that rent at 125 percent or more than the regional median, saw 9.8 percent annual growth.

Most of the tenants competing for rental units are families wanting more space, but either can’t get into the for-sale housing market, or plan to relocate or downsize in a couple of years, once high-school-aged kids graduate. Scott said four-bedroom, 2-1/2-bathroom rental homes have been far and away the most popular among renters with whom he works.

Pittro said she’s seen demand from empty-nesters who’ve sold their homes and want something with upscale finishes and amenities, a short drive or train trip to places like downtown Milwaukee.

Sandhu said there are also a lot of renters-by-choice who, perhaps more than ever, want a more portable lifestyle.

Rental markets, like the for-sale market, tend to slow down after Labor Day. Those in the industry say they anticipate a similar slowdown in the months ahead.

“We’re into October pretty soon, so we’re seeing some of the traffic slow down,” Pittro said. “But it has been a wild ride in 2021, and it’s much stronger than anybody thought.”