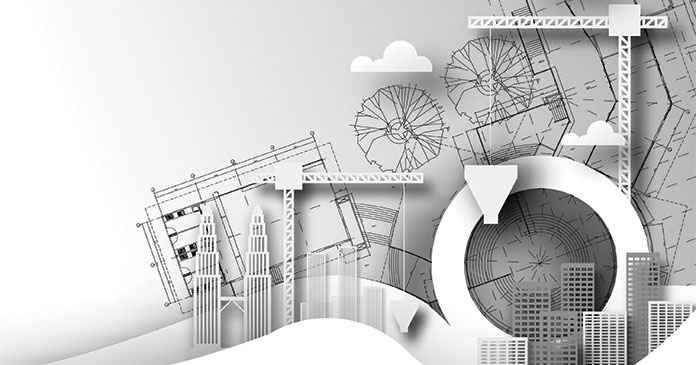 New renters are signing leases and moving into 109 luxury apartments at The Arden, an old office building that re-opened as a new multifamily community in the Koreatown neighborhood of Los Angeles, in August 2021.

The Arden is just one of a flood of new apartments that will open in 2021 in old buildings designed for another purpose— from historic school buildings to office towers and hotels to defunct shopping malls.

Those new units will add up to the busiest year for adaptive re-use in the last decade.

Demand for rental apartments continues to rise. The coronavirus pandemic barely slowed the growth in rents in many places. Developers eager to fill that demand are creating new rental apartments any way they can. Since sites are expensive and hard to find, a growing number of developers are learning to convert other kinds of existing buildings to become apartments—though these can also be expensive to buy and renovate.

Some of these developers perform relatively simple renovations of 1960s and 1970s office buildings to create new communities like the Arden. Others take on much more complicated and expensive redevelopments—often with help from state and federal housing and historic rehabilitation programs—such as transforming a 100-year-old schoolhouse or an empty, grand hotel into new rental apartments.

More adaptive re-use than ever

“Multifamily development is increasingly occurring at sites where something else once stood or within buildings that once housed another use,” says Larry Curtis, president and managing partner of WinnDevelopment, based in Boston.

“That’s the biggest block of deliveries [of all kinds of apartments] brought on stream in a single year over the past three decades,” says Greg Willett, chief economist for RealPage. “Rental housing shortages exist almost everywhere, so every little bit of additional product is helpful—but conversions from other real estate products to apartments likely will always be a drop in the bucket compared to ground-up, new construction.”

Development sites are hard to find

But more developers are learning how to redevelop existing buildings as green fields where they can build new apartments become more rare and more expensive.

Prices are surging for sites of all types. Developers paid $26.0 billion to buy sites for new commercial and multifamily projects over the 12 months ending in the third quarter of 2021. That’s more than developers spent in any year since the Global Financial Crisis, according to Real Capital Analytics (RCA), a data firm based in New York City.

The cost of construction materials and labor can also be less for relatively simple redevelopment projects than building a new apartment complex from the ground up—as much as 30 to 40 percent less, according to Emil E. Malizia, a research professor in the Department of City and Regional Planning at the University of North Carolina at Chapel Hill.

“The total development cost per unit should be less as long as the cost of the site and building is not significantly more expensive than the cost of site acquisition for new construction,” says Malizia.

Developers agree. “That’s about right—though sometimes the discount is a little less than 30 percent,” says Jaime Lee, CEO of Jamison Realty, developer of The Arden in Los Angeles.

She should know. About a decade ago, Jamison began to redevelop its portfolio of office buildings in Los Angeles, filling the aging high-rise buildings with new apartments. The firm also began to build new apartments from the ground up, splitting its development pipeline between the two.

Jamison began its first redevelopment project in a 12-story, 1960s office building in L.A.’s Wilshire neighborhood, which seemed likely to need millions of dollars in tenant improvements and renovations to boost its sagging occupancy rate. Instead, Jamison opened the renovated building as 127 new apartments in December 2013.

“We strive to bring properties to their highest and best use,” says Lee. “You have this building and it really just wants to be an apartment building. While the demand for office space just isn’t spectacular.”

Jamison is not the only developer who sees opportunity to turn offices buildings into apartments. Nearly half (41 percent) of the conversions being completed in 2020 and 2021 are in former office buildings, according to Yardi Matrix.

“There is a significant flight-to-quality happening in the office sector. Tenants are demonstrating a significant preference for high-quality and well-located office space,” says Matt Vance, research director for the Americas Research Team at CBRE, working in the firm’s Chicago offices. “So what do we do with the older, less favorable office buildings?”

If these aging office buildings are suitable—if, for example, they have floor plates that are not too large to divide into reasonable-sized apartments with windows—then adaptive re-use could give these aging buildings new life.

But there’s a catch.

“To make the underwriting work, these developers would have to pay a fraction of the ‘current value’ of the office assets,” says CBRE’s Vance.

Despite the coronavirus pandemic and the large number of employees still working from home, most office buildings still have enough tenants paying rent to easily continue to pay their mortgages—even if the buildings are old and becoming less desirable. The owners of these buildings are not motivated to sell at what many owners see as a discount because of the pandemic.

“Buyers and sellers don’t agree. There is uncertainty around the prices of assets in these areas,” says Jim Costello, senior vice president for RCA.

Some apartments good fit for hotels

Old hotel buildings can also find new life as apartment communities—particularly if the apartments are designed for renters who need smaller units.

“We have seen a rise in the number of hotels and motels purchased for some type of conversion,” says Jay Lybik, national director of multifamily analytics for Apartments.com and CoStar Group.

Developers bought 65 hotels to convert into another type of building in the first 10 months of 2021, according to CoStar. That’s up from 41 in the whole of 2020. It’s an even bigger increase from the years before the pandemic, when developers typically purchased just 20 to 30 hotels and motels per year for some type of conversion.

However, the hotels that are being redeveloped now represent just a tiny fraction of the hotels badly hurt by the coronavirus pandemic. Just 22.7 percent of available hotel rooms were occupied on average over the 28 days ending April 17, 2020, down from 72.4 percent the year before, when the U.S. economy was still strong.

Despite the pain that the pandemic caused to hotels, not that many have been offered for sale.

Just like many office properties, many hotels are held by well-capitalized owners—like real estate investment trusts—that have not been forced to sell. The few hotels bought and sold during the pandemic traded at prices close to what buyers paid before the pandemic, according to RCA.

Some state and local governments have helped make deals happen by providing funding for the redevelopment of older hotels.

In December 2020, Sonoma County opened 44 new supportive housing apartments at Mickey Zane Place, in the rehabilitated Hotel Azure in downtown Santa Rosa, Calif. The apartments will provide a safe place to live and services like counseling and case management to recently homeless people and people threatened with homelessness.

The County spent a total of $7.9 million to renovate the old hotel with help from California’s new Homekey program, in addition to money from federal low-income housing tax credits and rental housing subsidies.

California’s Homekey program helps affordable housing developers buy and renovate buildings to become new supportive housing apartments. Since it launched in July 2020, the program has provided shelter to thousands of Californians and created 6,000 affordable housing units in “record time and at a fraction of the cost,” according to state housing officials.

California expanded the program in September 2021 with another $2.75 billion in state funding to help affordable housing developers buy and renovate buildings into another 14,000 units of permanent supportive housing. Oregon is also considering a similar program, says NH&RA’s Amdur.

However, most conventional developers have become less interested in converting old hotel buildings into new apartments as many mainstream renters grew to favor more open floorplans.

“From a design perspective if you wanted to adapt a hotel into housing, there are really only certain types of housing that it would be good for,” says Amdur. “The hotel rooms are going to be small.”

Some of the most rewarding properties to rehabilitate can be historic landmarks. There are thousands of these properties scattered throughout the U.S. Some are in terrible condition and having been vacant for years.

“Most of the people who do it are still people who have a passion for it, and the minority of people are just trying to make a buck,” say Joyce Barrett, executive director of Heritage Ohio, based in Columbus. “You have to love historic rehab, because there are always surprises.”

Many of these landmarks are more than 100 years old. Sometimes original plans have been lost, along with the records of later additions, like buried fuel tanks, asbestos or utility lines.

“In historic adaptive reuse, the construction and development costs are always higher than if you built the building from new,” says Tom Capp, vice chairman of the board of Gorman, based in Madison, Wis. “The reason those developments are being done is the large amount of equity being brought in by state and federal historic rehabilitation tax credits and [often] LIHTCs.”

Historic tax credits help many developers make up the extra cost of fixing up a landmark. Even novices can navigate a first project—with help. “Hire the right people. You’re going to use an accountant and an attorney and a consulting architect, who all know the historic tax credit,” says Barrett. “You don’t hire people who don’t really know the language.”

Also, make sure to do as much due diligence as possible and still plan for expensive surprises. “More than one development firm was sunk—so that the firm closed—by misunderstanding what the costs will be—almost always by not doing enough exploration,” says Capp. “Your contingencies need to be larger—often millions.”

Not every place will have great opportunities to convert older buildings into new apartments. Some metro areas simply don’t have enough older buildings available where renters want to live.

“What holds the strongest appeal right now is suburban product in fast-growing Sun Belt metros,” says Willett. “While there are some mall and other retail sites appropriate for redevelopment [in these markets], there aren’t many obsolete office or hotel buildings.”

However, a few secondary cities that have slowly growing economies show promise. Willett points to place like Upstate New York, locations across Ohio and Michigan, and maybe even a few Sun Belt metros like Louisville, Ky., Memphis, Tenn., Greensboro, N.C. or Birmingham, Ala.

“The existing apartment stocks have gotten jam-packed full in these markets over the past couple of years, pushing rents to levels that will make development feasible in a variety of product options for the first time in decades,” says Willett. “These types of cities have old but well-located office and hotel buildings that might be suitable for conversion to apartments.”

In bigger, gateway cities, new demand for apartments in central business districts and long-neglected neighborhoods have made it possible for developers to create thousands of new apartments in converted buildings.

The top cities where developers created the most new apartments in converted office building in 2020 and 2021 include Washington D.C. (1,091 apartments) and Chicago (1,020 apartments), according to Yardi.