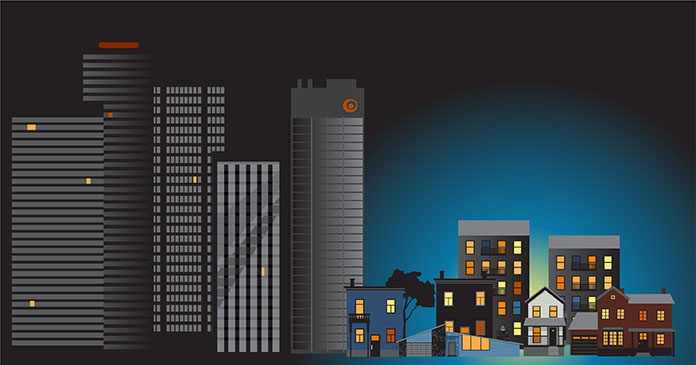 The suburban shift for single-family home buying precipitated in large part by the onset of the COVID-19 pandemic last year continues but new data reveals that higher density markets are making a comeback as well. In contrast, the market share for multifamily construction shows a significant increase in smaller cities and rural areas while the pace of new permits is easing in larger metropolitan markets.

These are among the findings of the third quarter National Association of Home Builders (NAHB) Home Building Geography Index (HBGI) released today. The HBGI also reveals that permits are running strong in counties with a high concentration of second homes.

“As more workers transitioned back to the workplace, there was a rebound for housing production in urban core markets, as well as ongoing growth in exurban areas,” said NAHB Chairman Chuck Fowke, a custom home builder from Tampa, Fla. “And while builders are still grappling with affordability headwinds in both small and large markets, this rebound in housing production in some higher density markets where building is more costly highlights the need for policymakers to reduce housing supply barriers that are driving up home prices.”

The four-quarter moving average for large metro core area single-family permit growth between the third quarter of 2019 and 2020 was 5.6 percent, while exurbs grew at a rate of 12.3 percent. Jumping ahead a year, the new permit rate of growth in this same four-quarter period between 2020 and 2021 increased to 21.1 percent for large metro core markets and 30.8 percent for the exurbs.

“Although all geographies are showing construction growth, the suburban shift is less pronounced than we’ve seen in prior quarters as some higher density markets see a rebound even as exurbs continue to expand,” said NAHB Chief Economist Robert Dietz.

On the multifamily front, an opposite trend is occurring, with apartment construction in lower density markets growing even faster as high-density markets lose market share.

The latest HBGI data reveal between the third quarter of 2020 and 2021, the share of new multifamily permits fell from 40.5 percent to 37.9 percent in large metro core markets. Meanwhile, the permit share in small metro area counties increased from 24.9 percent to 27.2 percent.

Though these percentage changes look relatively small, they are statistically significant. Historically, year-to-year changes in multifamily market share are usually slow to develop and rarely move more than one percentage point higher or lower. This makes these latest year-over-year numbers noteworthy.

“Over the last year, second home markets have increased their market shares, due to increases in hybrid work arrangements, early retirements and wealth gains in housing and stocks,” said Dietz.