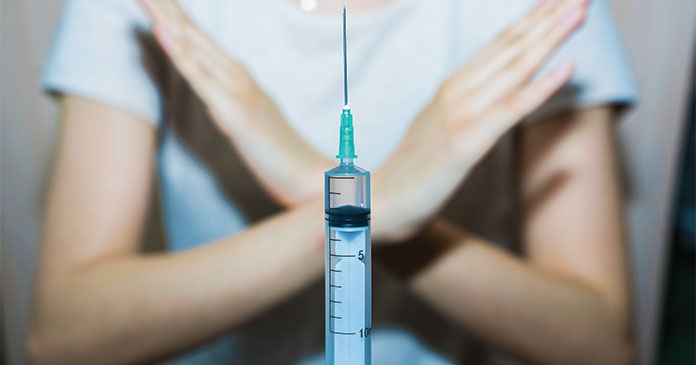 It’s no secret that President Joe Biden’s various vaccination mandates (except for the one covering the military) have been having a tough slog in the courts recently.

Nearly all of them are on hold, and the one that seems to really have one foot in the grave at the moment is the mandate for private employers with more than 100 employees to require vaccinations or testing.

The last time we checked, the courts were reviewing that one in a combined fashion that would apply to the entire country, and the early signs didn’t look good. The Supreme Court has also appeared cool to the idea of the federal government overriding the states in such a matter.

So what happens if the mandate is permanently shut down? Will employers around the country still embrace the “spirit” of what Biden wanted them to do and put those rules in place anyway?

According to a recent survey by via the Society for Human Resources Management, 75 percent of employers would not commit to such a requirement if the courts strike the mandate down completely (Yahoo News).

More than two-thirds of U.S. employers recently surveyed have no plans to make vaccination a condition of work, if courts ultimately strike down the Biden administration’s mandate for large employers.

According to the survey of 1,000 randomly selected members of the Society for Human Resources Management, 75 percent said they’re not likely to implement either of the mandate’s central directives—full vaccination or weekly testing—should a permanent court ruling make the measure illegal.

“The majority of employers and HR professionals that we chatted with are really in wait-and-see-mode,” Annemarie Schaefer, SHRM’s head of research, told Yahoo Finance. “So they don’t even know what to expect.”

With both the 5th and 6th Circuit courts slamming on the brakes, the Biden administration is currently trying to work in a Plan B, asking the courts to at least approve his “test and mask” requirement if they won’t demand proof of vaccination.

That doesn’t seem much more likely at this point because “how” he restricts the choices of the employers isn’t really the sticking point. It’s a question of whether he can restrict them in this fashion at all from the federal level.

Reading into some of the feedback from the participants in this survey, there doesn’t seem to be an overwhelming consensus among employers either in favor of or opposing vaccine mandates at their companies. Many are simply confused by all of the conflicting regulations and court decisions. Several reps who said they wouldn’t move forward with it suggested they were taking a “wait and see” approach.

The fact that so many of them are still holding off sends a fairly strong message, however. It’s already been established that private employers can require vaccinations as a condition of employment as long as the policy doesn’t discriminate against anyone on the basis of disability or religion. Most of these employers could already have such a mandate in place if they really wanted one.

So why haven’t they?

For many, it appears that the “Great Resignation” and the ongoing labor shortage have presented too many challenges as it is. If any measurable chunk of your workforce is among the unvaccinated and you implement such a policy, you’ll probably just further drain your available labor pool. The people you let go will seek work in smaller companies that won’t be impacted by the mandate. And those opportunities have been growing in number.

That trend seems to be born out by the survey. 56 percent cited employee retention concerns as a reason to hold off on implementing a mandate. 73 percent pointed to concerns over legal challenges, while 65 percent expressed concerns over the impact the rule would have on employee morale.

The original deadline for the OSHA mandate was set for January 4, only a few weeks away. The odds of the courts having this all sorted out by then appear slim. And by the time it’s all settled, people may be done with these types of policies and ready to just get back to work.