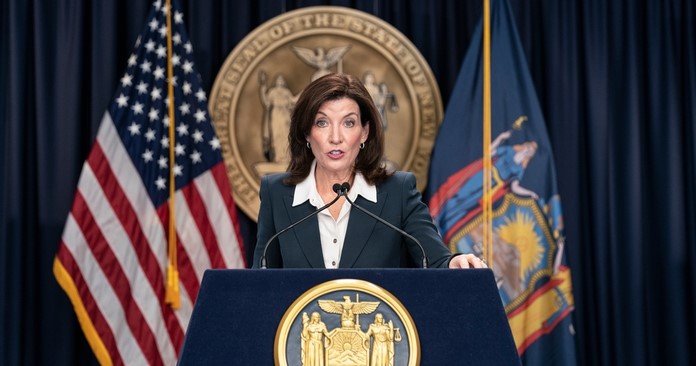 New York Governor Kathy Hochul’s State of the State report for 2020 identifies a number of goals and proposes several programs to improve access to housing in the state.

The overarching goals defined in the report are to make New York housing more affordable, equitable and stable. To do this, the report proposes a 5-year plan for housing funded by $25 billion. The plan will be designed to promote economic recovery, social justice, climate action, and digital connectivity.

While the report is more a statement of goals rather than a proposal for specific legislation, it does outline a number of plans for changes that will directly affect the operations of multifamily properties.

The Governor proposes limitations on the resident screening process. She plans to support a “fair chance” housing law which would require landlords to review the criminal histories of prospective residents on a case-by-case basis. They would have to consider the specific circumstances of the applicant’s conviction and also consider evidence of his rehabilitation in the screening process “while still ensuring the safety and welfare of existing residents.”

Under the Governor’s plan, applicants with poor credit histories could not be rejected for housing in New York if they can demonstrate one of three things. The first is that they made full, on-time rent payments for the prior 12 months. The second is that they will receive one or more rent subsidies that will pay their full rent directly to the landlord. The third is that their poor credit history is due to unpaid student loan or medical debt.

The Governor plans to create a legal assistance program for renters facing eviction. Currently there is such a program covering New York City, but the new program would cover the rest of the state. It would provide legal assistance during eviction proceedings to residents earning up to 200 percent of the Federal poverty level.

The plan would also expand fair housing testing across the state, including to counties where it is not currently being done.

The Governor proposes easing restrictions on converting hotels and office buildings into multifamily housing. Any class B hotel located in or near a residential area could use its existing certificate of occupancy for permanent residences under certain conditions. Some of the regulations governing the conversion of office buildings would also be waived under the Governor’s plan.

The report proposes that a New York State law that limits the maximum density of residential floor area ratio in New York City to 12.0 be repealed. This change would allow higher density residential development, both for purpose-built residential buildings and also for office conversions.

With the 421-a tax abatement program scheduled to expire in 2022, Governor Hochul recommends establishing a new program that uses tax dollars more efficiently to spur housing construction. She proposes expanded goals for the new program including providing more deeply affordable housing for a longer term than the existing program, ensuring that affordable housing is available in neighborhoods across New York City and by requiring carbon-neutral technologies be used in construction.

The plan calls for the weatherization and electrification of New York’s housing as part of the State’s efforts to reduce carbon emissions and proposes funding to start the process.

The report proposes establishing two housing pilot programs. The first would seek to create affordable, community-controlled homeownership projects, focusing on three primary goals. They are: insulating housing from market forces, promoting equality and cohesion among neighbors, and enabling residents to exercise shared control over their housing.

The full report is available here.