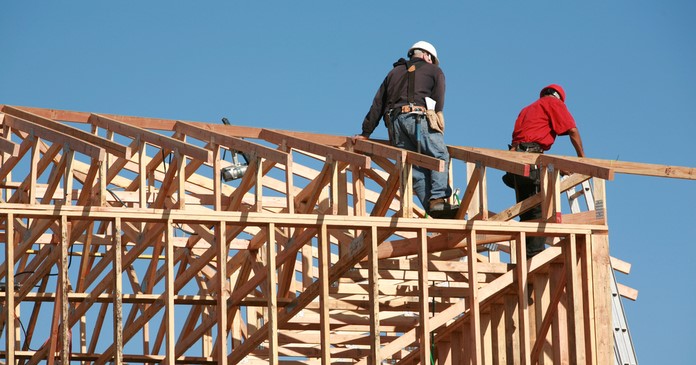 The latest Employment Situation Report from the Bureau of Labor Statistics (BLS) stated that the numbers of both residential construction jobs and apartment operations jobs were both up for the month. However, this report is the first to contain revisions based on the 2020 decennial census and changes to the seasonal adjustment factors the BLS uses, so making comparisons to previous reports may be more difficult than usual.

The BLS reported that employment increased by 467,000 jobs in January, based on their survey of business establishments. The establishment survey found that the number of employed persons is still 2.9 million below its pre-pandemic level.

The BLS also reported that the US unemployment rate ticked up to 4.0 percent in January. This metric is derived from a separate survey of households. That survey found that the number of unemployed persons rose by almost 200,000 and is now 800,000 above the pre-pandemic level.

The household survey found that the number of people in the civilian labor force grew by 1,393,000 during the month while the adult population rose by 1,066,000. These figures are much higher than those in recent reports. The labor force participation rate rose to 62.2 percent. It had been at 63.4 percent before the pandemic. 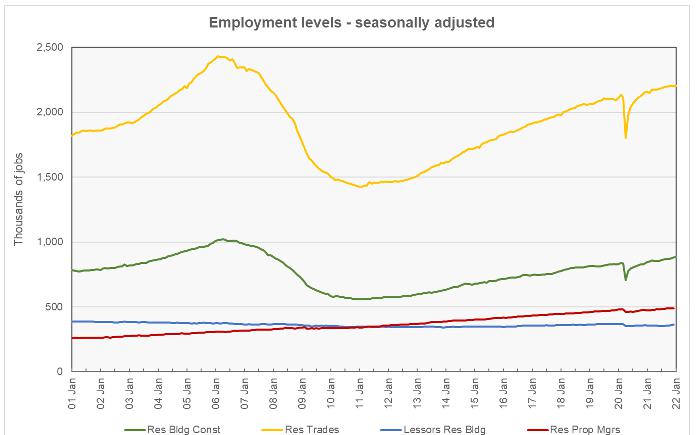 Construction jobs up for the month

Employment in residential building construction in January, usually with general contractors, was reported to be up 3,600 jobs (0.4 percent) from the revised employment level for December at 883,300 jobs. However, December’s employment figure was revised downward by 6,700 jobs, so January’s preliminary employment is actually 3,100 jobs lower than the preliminary figure reported for December last month. Employment in this category is up 4.6 percent year-over-year and is now 5.3 percent higher than its level in February 2020, before the effects of the pandemic were felt.

Employment in residential building trades, i.e. plumbers, electricians, etc., in January was reported to be up 800 jobs (0.04 percent) from December’s revised figure at 2,203,300 jobs. In addition, December’s preliminary employment figure was adjusted upward by 26,200 jobs. Employment in this category is up 2.3 percent year-over-year and is now 3.2 percent above its level in February 2020.

Total employment in these two categories of residential construction jobs combined was up 0.14 percent in January from the revised level of the month before and was 3.8 percent above its level in February 2020.

Employment for residential property managers in December was reported to be up by 1,300 jobs (0.27 percent) from its level for November to 488,600 jobs. However, the November jobs figure was revised downward by 10,900 jobs, so the preliminary figure for December is 9,600 jobs lower than the preliminary figure for November reported last month. Employment for residential property managers is up 2.5 percent year-over-year and is up from its February 2020 level by 1.6 percent.

Employment for lessors of residential buildings was reported to rise in December by 4,000 jobs (1.1 percent) to a level of 362,500 jobs. The preliminary employment level reported for November was revised downward by 1,000 jobs, accounting for a portion of the gain. Employment in this category is up 1.0 percent year-over-year and is now 1.7 percent below its pre-pandemic level.

Total employment in these two categories combined was up 0.63 percent for the month and is now 0.15 percent above its level in February 2020. 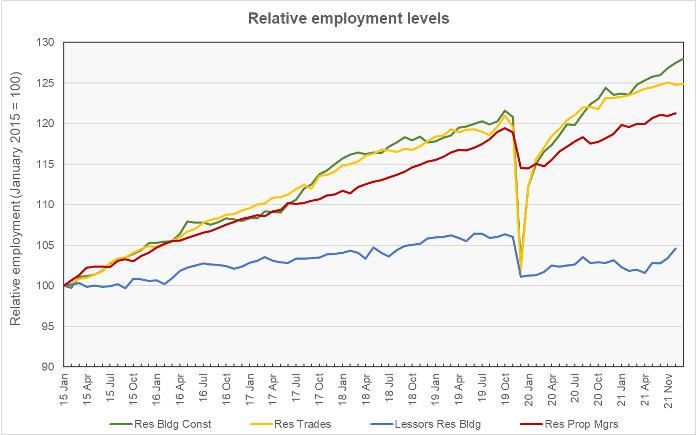