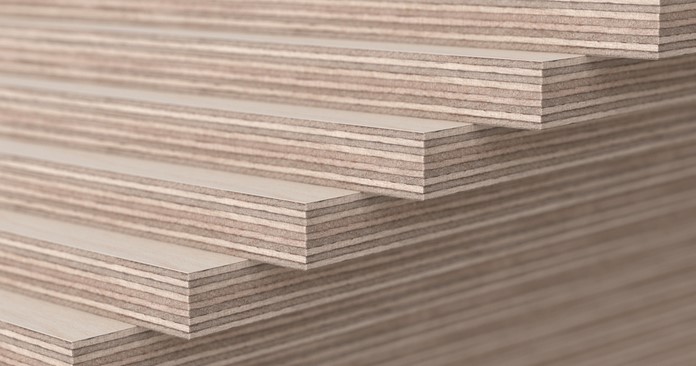 The Bureau of Labor Statistics (BLS) released its producer price index report for February 2022. It stated that construction materials prices were up 1.2 percent in the month, seasonally adjusted. The index was 23.5 percent higher than its year-earlier level.

Overall prices for processed goods for intermediate demand rose by 1.6 percent in the month. The index was 23.3 percent higher than its year-ago level.

For reference, the changes in these indexes compare with a 7.9 percent rise in the all-items consumer price index (CPI-U) for the 12 months ending in February. The CPI-U was up 0.8 percent for the month. The shelter portion of the CPI was up 4.7 percent from its year-ago level.

Yield Pro compiled the BLS reported price changes for our standard list of construction commodities. These are commodities whose prices directly impact the cost of constructing an apartment building. The two right hand columns of the table provide the percent change in the price of the commodity from a year earlier (12 Mo PC Change) and the percent change in price from January 2022 (1 Mo PC Change). If no price data is available for a given commodity, the change is listed as N/A.

The pre-COVID column lists the change in the current commodity prices relative to the average prices from December 2019 through February 2020, before the pandemic impacted the economy. This may give a truer idea of the magnitude of the recent price increases for commodities, such as lumber, whose prices were already rising sharply last summer, than does the 12 Mo PC Change column.

Previously, the price indexes for individual commodities published by the BLS were almost never revised after they were released. However, in recent months, revisions have been made to many of the component price indexes, some of them significant. Significant revisions will be discussed below.

The first chart, below, shows the price index history for wood products over the past 37 months. Note that the prices used by the BLS in compiling the indexes are collected on the Tuesday of the week containing the 13th day of the month. In February 2022 that would have been February 15. 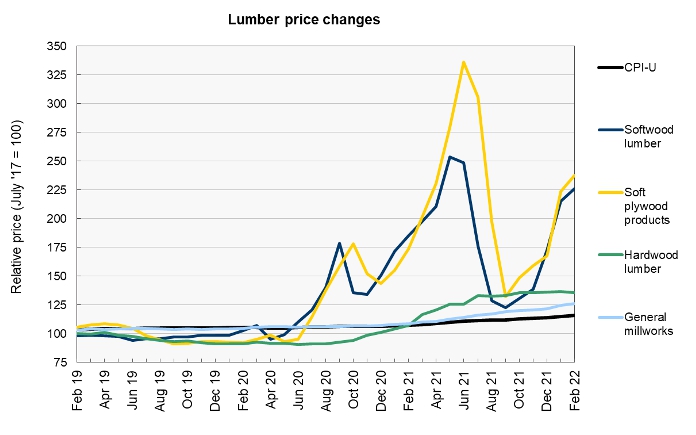 In February, the price of softwood lumber rose by the second highest monthly percentage of the commodities we track, rising 5.2 percent. However, its annual price rise of 22.1 percent was is lower than the year-over-year rises in several of the metals-based construction materials prices we track.

In February, soft plywood products saw the highest monthly rise of the construction materials prices we track. Their rise was also by far the highest relative to their pre-pandemic price level. The price index was up 6.4 percent in the month and up 157 percent from its level around January 2020. The January price index for these products was also revised upward by 17.4 percent, so the February price index was actually up 24.8 percent from the preliminary level for January reported last month.

The prices of general millworks continue to move steadily higher in line with the overall rise in construction materials prices. Prices for hardwood lumber actually fell slightly for the month, although they are still up 27 percent for the year. 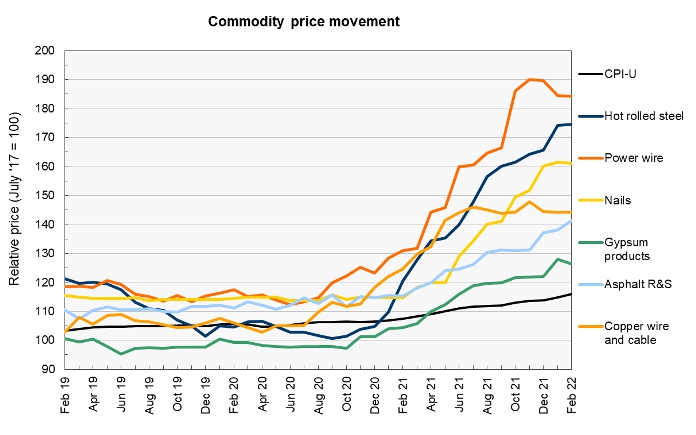 The price indexes for copper wire and for power wire were relatively unchanged for the month. The prices of the steel-based commodities we track, like hot-rolled steel bars, sheet metal products and nails that were reported last month were all revised lower this month. The price index for nails was revised lower by 2.6 percent, the largest reduction for the construction materials on our list.

MarketWatch reports that the NYSE American steel index rose beginning in late February at the time that Russia invaded Ukraine. However, the price is down from the high it reached two weeks ago. It closed on March 14 at $1,782 up $61 from its level of a month ago. Steel futures moved higher and became much more volatile since late February. The July 2022 contract closed on March 14 at $1,659, up $704 since we last reported on it. The September 2022 contract is at $1,609.

The 2.3 percent monthly increase in the price index of asphalt roofing and siding in February was the highest of any of the construction materials prices that we track The price index of gypsum products had the largest reported percentage decline for the month.

Price changes for several of the more finished goods from our sample are illustrated in the final chart, below. The price index for electrical lighting fixtures resumed its rise this month after falling last month. The price index for furnaces and heaters rose 1.0 percent this month, aided by a 0.4 percent downward revision made to last month’s index. 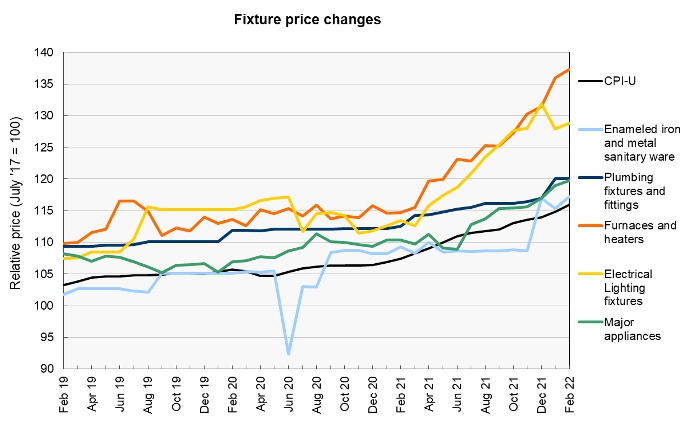