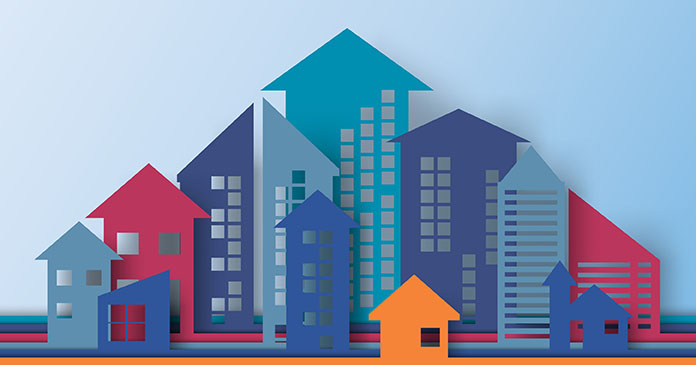 New findings from the National Association of Home Builders (NAHB) Home Building Geography Index (HBGI) show that the rate of year-over-year single-family growth in all small and large metro urban, suburban and rural regional submarkets peaked in the second quarter of 2021. While that expansion has cooled somewhat, growth rates in all markets remained in double-digits in the final quarter of 2021. In contrast, multifamily growth in all of these markets has been surging since the second quarter as some housing demand returned back to higher density markets.

“As the economy reopened in most parts of the nation during the latter part of 2021, solid home building activity occurred in all regional submarkets,” said NAHB Chief Economist Robert Dietz. “Multifamily production posted strong gains in all regional markets as the demand for apartments increased. Meanwhile, supply-side constraints that include ongoing labor shortages and a lack of key housing products that include garage doors, appliances and windows has delayed single-family construction times across the nation and put upward pressure on home prices.”

“The lack of resale inventory in markets across the country has sustained demand for single-family and multifamily construction in almost all areas,” said NAHB Chairman Jerry Konter, a builder and developer from Savannah Ga. “Higher construction costs, particularly for lumber and OSB, along with a limited availability of building materials, is making it more difficult for builders to meet market demand. Policymakers must work to alleviate supply chain bottlenecks that are aggravating the housing affordability crisis.”

And while growth rates for single-family and multifamily production remained solid in the second half of 2021, Dietz cited key factors why production activity for these types of housing were trending in opposite directions.

“Single-family home building activity surged in the wake of the Covid crisis, as interest rates fell and prospective home buyers sought more space,” said Dietz. “The rebound for multifamily construction lagged somewhat as housing demand had shifted to lower density markets. As some of that demand returns, a rebound for apartment building has occurred.”

As the economy more fully reopened in the wake of the COVID crisis, the geography of multifamily housing demand shifted with a greater concentration in high density markets. While multifamily production also increased in rural areas, growth rates were particularly notable in large metro markets, where the largest share of apartment construction typically occurs. The HBGI shows that: