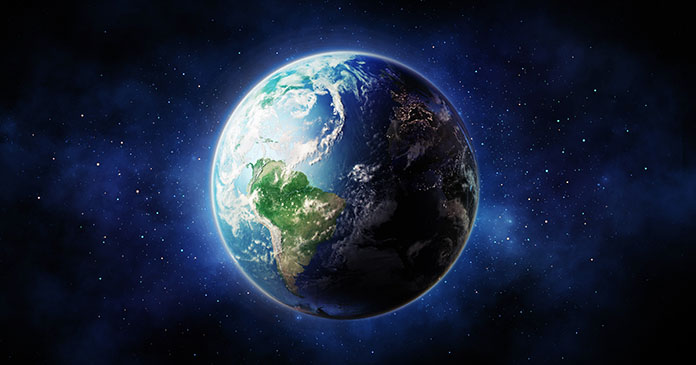 Foreign investors made up for lost time during the epidemic by investing $21 billion in multifamily properties in the U.S., pivoting their focus away from key coastal cities and toward the Sun Belt and second-tier areas.

Foreign investors are especially interested in student and senior housing, as well as the impact of climate change. 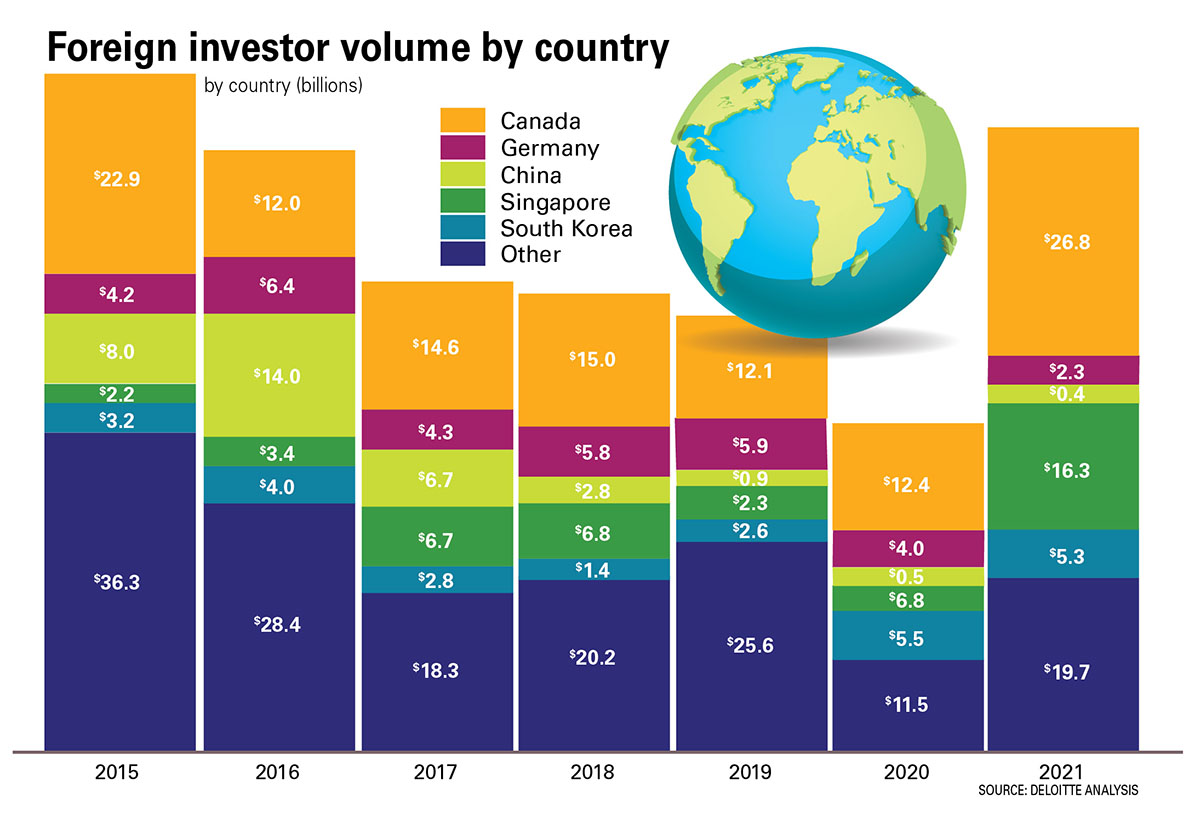 According to Deloitte, U.S. commercial real estate property sector saw a boom in investment activity in 2021, with volume increasing for 5 of the 6 quarters after the outbreak.

Despite continuing uncertainties about inflation levels, supply chain constraints, closure measures and travel restrictions, last year’s total of approximately $809 billion in commercial properties topped the preceding year by over 80 percent and blasted past the previous record high in 2019 by 35 percent.

Increased confidence in income growth, combined with the asset class’s stable returns have pushed the U.S. real estate sector back to the forefront.

Foreign investors were absent for much of 2020 and early 2021 accounting for nearly 20 percent of overall real estate investment activity, or $100 billion per year.

As global investors shifted their focus back to domestic concerns during the peak of the pandemic, combined with evolving restrictions on international travel, volumes into the United States from abroad dried up to as little as 7 percent of total U.S. real estate deal activity, a level not seen since the global financial crisis of 2007–2008.

The situation transformed in the second half of 2021 when travel restrictions were relaxed with vaccination distribution and confidence about new growth patterns bloomed. Foreign investment increased by $53 billion in the second half of the year accounting for the vast bulk of the $69 billion annual total from 2021, the second highest since data began in 2001.

One notable example was the German real estate fund Union Investment’s foray into the U.S. apartment market late last year with a $227 million purchase of a two-building complex in Fort Lauderdale.

Union had previously invested in office buildings with long-term credit tenant leases, which were seen to be more secure for investors seeking consistent cash flow. According to Riaz Cassum, executive managing director, capital markets and global head of international capital coverage for JLL, the fund was enticed by the multifamily property’s low capitalization rate and limited continuing capital requirements.

According to Matt Vance, senior director and Americas head of multifamily analysis for CBRE Econometric Advisors, there is more capital and dry powder in the world now with the focus on investing in commercial real estate.

Foreign investors into the U.S. historically focuss on big assets such as central business district offices, industrial, large regional malls, or luxury hotels, and adhering to a small number of primary markets with high liquidity. However, this is changing as investors seek multifamily, industrial, and specialty property types such as student housing and data centers.

Non-U.S.-based investors are also shifting their focus from big metros to capitalize on the economic potential of emerging cities, particularly in the Southeast and Southwest. They are relocating their capital to places they believe will perform well in the next cycle.

The percentage of foreign capital invested in the top six core markets (New York, San Francisco, Los Angeles, Chicago, Boston, and Washington D.C.) fell to 37.8 percent in the first half of 2021, down from 46.8 percent in 2019 and 57.9 percent in 2015, according to Marcus & Millichap. During that time, cities such as Seattle, Charlotte, Dallas, Atlanta, and Phoenix grew market share.

International investors have moved their attention to U.S. multifamily construction as a result of the asset class’s outstanding performance, particularly in secondary markets and suburban regions that are enjoying the most robust demand and rent growth.

Canadian investors have been especially active, typically being more familiar with smaller metros outside of the handful of higher-density gateway areas that have traditionally drawn the greatest attention from non-U.S. investors.

Furthermore, Dodge Data & Analytics predicts $53 billion in new-construction in the warehouse and distribution center market this year, accounting for more than one-third (36 percent) of the U.S. commercial construction. According to JLL, the U.S. will need 1 billion sq. ft. of commercial real estate space over the next five years to meet ecommerce demand. 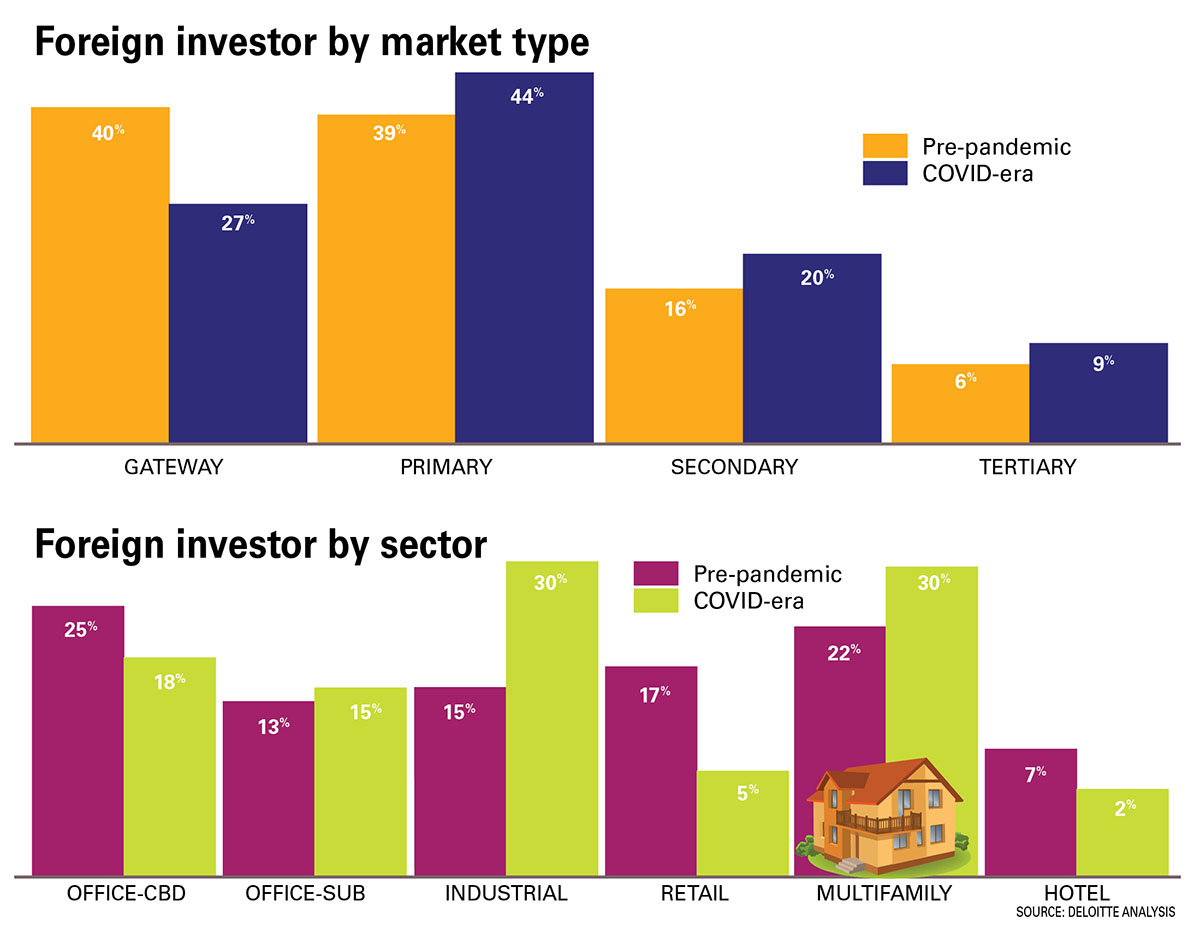 Who will win the big brawl

The two giants, industrial and multifamily have become the apples of the eyes of global investors. Both multifamily and industrial real estate demonstrated adaptability to the economic and sociological upheavals accelerated by the COVID-19 epidemic. Both experienced secondary market expansion and are being impacted by the increasingly important ESG movement. Labor shortages, surges in inflation, and supply chain disruptions are expected to persist, but so are high internal rates of return in many industries.

Given the strength of these two areas, investors may believe they cannot make a mistake. While only time will tell who wins the race, it will almost certainly be a photo finish.