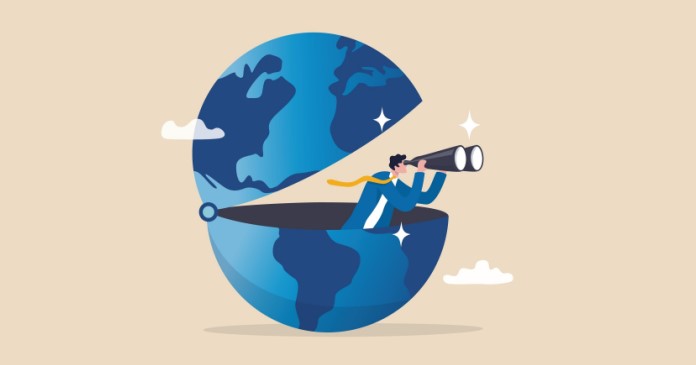 The latest forecasts from Fannie Mae and from the Federal Reserve relate the impact that the rapid rise in interest rates is expected to have on the economy.

The forecast from the Federal Reserve (Fed) was released in conjunction with the recent meeting of the Federal Open Market Committee (FOMC). The FOMC meets 8 times per year but only releases an economic forecast at 4 of the meetings. The Fed forecast presents estimates for economic metrics by year, now through 2025, and a “longer run” forecast which reflects their view of the output of the economy if operating at equilibrium. The consensus Fed forecast is developed by the combining the forecasts of 18 economists. Each of the economists assumes that the Fed will follow “appropriate” monetary policy during the term of the forecast, although their individual ideas of what that policy is may vary. 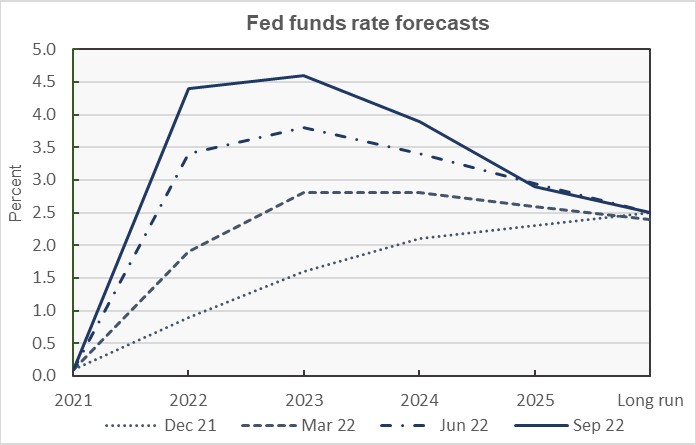 Fannie Mae began predicting an economic downturn in 2023 as early as their April forecast. More recent forecasts have adjusted the depth and timing of the downturn in response to the increasingly aggressive interest rate increases coming from the Fed. That is also the case in their current forecast, which is shown in the next chart, below. 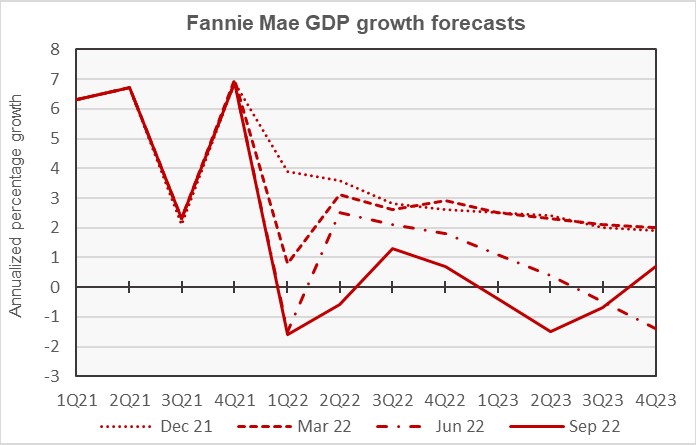 The current forecast calls for the downturn to begin in 1Q 2023 and to persist for most of that year. GDP growth is only expected to recover to a positive 0.7 percent in Q4 2023. Looking at whole years, Fannie Mae is now predicting no GDP growth in 2022 and growth of -0.5 percent in 2023.

The Fed does not release quarterly projections, instead focusing on each year as-a-whole. The Fed’s current forecast for GDP growth in 2022 is 0.2 percent, down from the 1.7 percent they forecast in June, but still higher than Fannie Mae’s prediction. The Fed also forecasts that GDP growth will be 1.2 percent in 2023, significantly higher than Fannie Mae’s prediction. Recent Fed GDP forecasts are illustrated in the next chart, below. 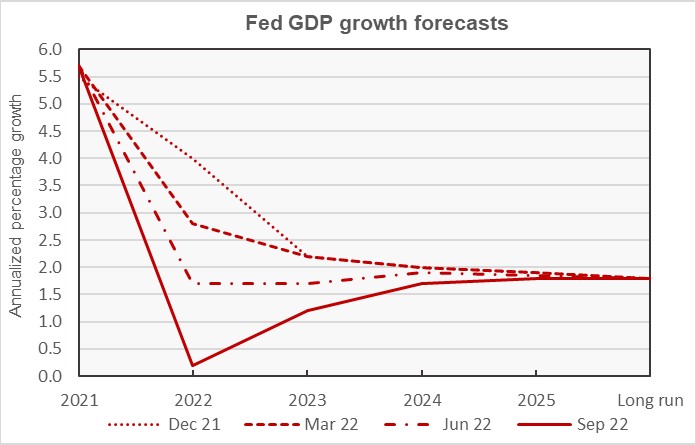 Since the common, if not official, definition of a recession is two quarters of negative GDP growth and since the Fed does not quote their GDP forecast on a quarterly basis, it is difficult to say whether they think that the economy will go into recession. Clearly the forecasters at Fannie Mae believe that it will.

A series of Fannie Mae’s recent PCE inflation forecasts are shown in the next chart, below. The chart shows that Fannie Mae now expects that peak inflation occurred in Q2 2022. While they think that the peak inflation rate will be slightly lower than they forecast in June, they now expect inflation to be higher late in 2023 than they did in their June forecast. Fannie Mae is currently calling for year-end inflation as measured by the PCE to come in at 5.5 percent in 2022 and 1.9 percent in 2023. 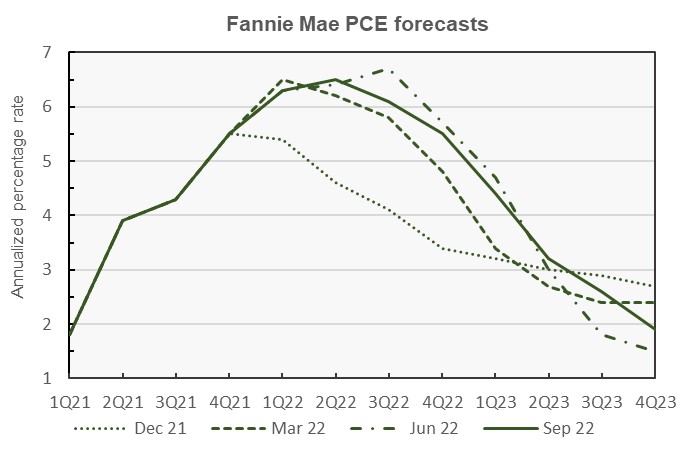 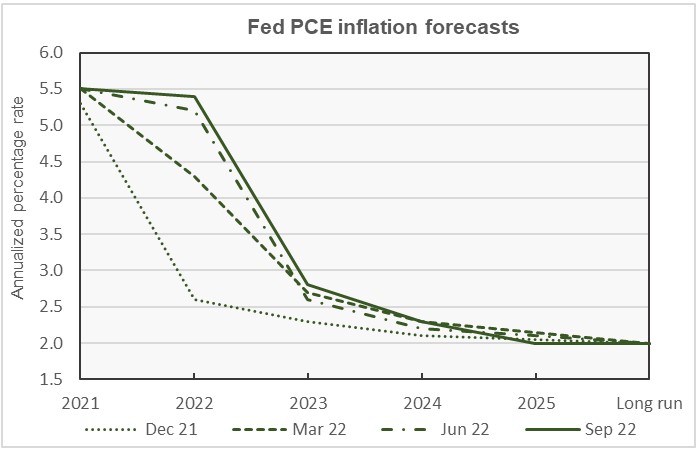 The new forecast from Fannie Mae calls for the unemployment rate to rise in 2023 as the economy cools under the influence of higher interest rates. This is shown in the next chart, below. 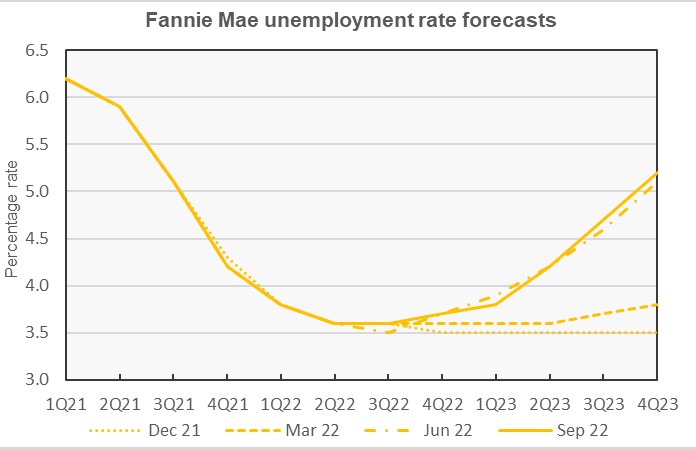 The chart shows that Fannie Mae’s forecast for the unemployment rate has not significantly changed since June. However, their forecast for employment growth has fallen. Fannie Mae now expects the economy to lose 2 million jobs in 2023, compared with their forecast of a loss of 600,000 jobs in the June forecast. It is a little surprising that the loss of an additional 1.4 million jobs did not have a greater impact on the unemployment rate than the 0.1 percent increase shown in the chart.

The Q4 2022 unemployment rate predicted by the Fed is 3.8 percent, slightly higher than Fannie Mae’s prediction of 3.7 percent. However, the Fed forecasts that unemployment will rise to only 4.4 percent in Q4 2023 while Fannie Mae expects that it will reach 5.2 percent. 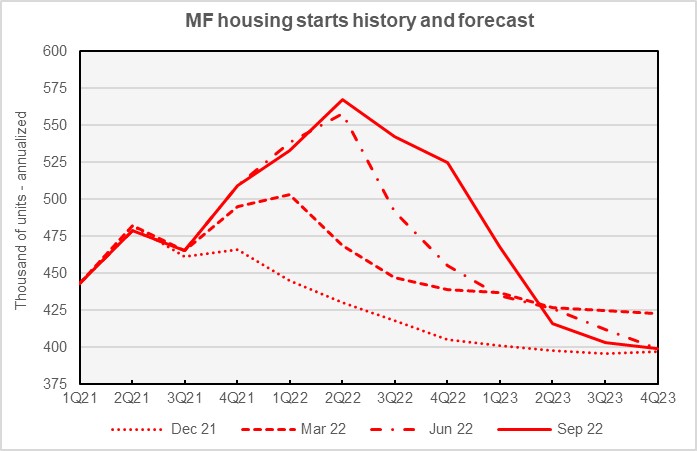 Fannie Mae’s forecast for single-family housing starts is shown in the next chart below, along with older forecasts. The chart illustrates that Fannie Mae has become increasingly gloomy about the prospects for this market. 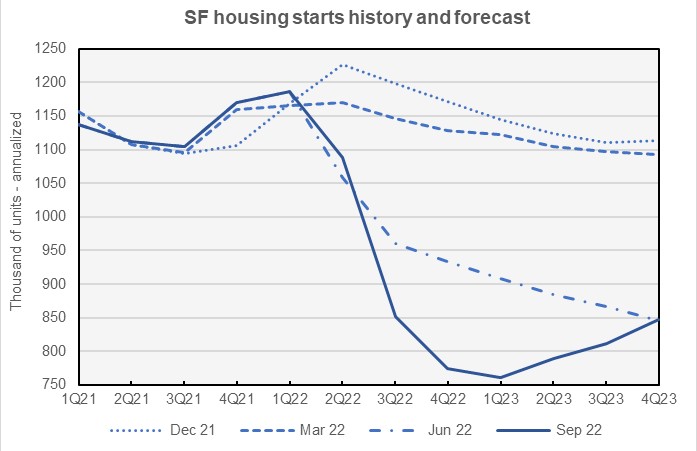 This month’s Fannie Mae Multifamily Market Commentary focused on manufactured housing and on the communities that rent spaces for them. It noted that interest in these communities as a means to address housing affordability issues has risen recently but that only 18 new communities are currently under development in the United States.