A report from Oxford Economics assesses the current state of the excess savings accumulated by American consumers during the pandemic. Access to these savings is helping to support current consumer spending, including on housing.

Legacy of the pandemic response

During the pandemic, consumers’ activity was restricted. At the same time, the government made several rounds of generous stimulus payouts. The net result was a surge in the savings rate and the accumulation of “excess” savings. Excess savings are defined as money that would not have been saved had the pandemic and the response to it not happened and pre-pandemic saving and income levels had been maintained.

While assessing the level of excess savings is a bit of an art form, Oxford Economics estimates that excess savings in the United States peaked at $2.36 trillion in Q3 2021. For reference, U.S. GDP in Q3 2021 was estimated to be $23.20 trillion, so these savings represented about 10 percent of the country’s total economic output.

Oxford Economics estimates that, as of August, consumers have drawn down excess savings by $553 billion, or 23 percent. This consumption of these savings is currently accounting for 5 percent of consumer spending. While Oxford Economics expects the rate at which excess savings are being spent to decline, the numbers in their report imply that 2/3 of these savings will be consumed by the end of 2023.

The report cites data from the Federal Reserve that indicates that it is the highest and lowest income quartiles who have depleted the largest shares of their excess savings. This is show in the following chart which uses data from the Fed’s report. 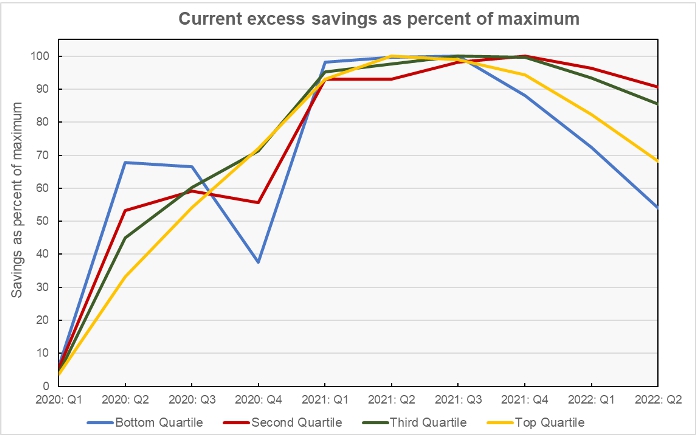 What it may mean

While the high rate of household formation coming out of the pandemic may be largely a result of formations occurring which had been delayed by the lockdowns or households re-emerging which had consolidated during the early days of the pandemic, people form new households when they believe they have the means support themselves. Therefore, the high level of excess savings available may be partly responsible for the high rate of household formation over the past 18 months. The entry of these new households into the housing market likely contributed to record smashing apartment absorption in 2021.

While not a subject of the Oxford Economics report, the impact of the exhaustion of their excess savings on newly formed households should be a topic of interest to the rental housing industry, particularly if the economy goes into recession. To the extent that households used these funds to pay for their housing choices, the exhaustion of those savings during a recession may exacerbate the demand destruction that usually occurs during a downturn.