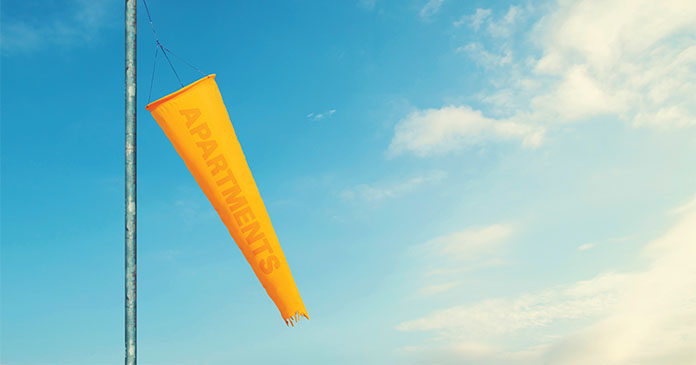 The pandemic years have created a winning trifecta of high rent, occupancy and demand in the multifamily sector. Vacancies dropped to 5.8 percent, their lowest level since the mid-1980s, rents reached record highs while favorable interest rates and ready access to capital drove a vibrant transaction environment.

But what goes up must eventually come down. The final month of this year’s third quarter marked the end of this accelerated multifamily growth run, thanks to the headwinds stirred up by the Federal Reserve’s incremental increases in its benchmark interest rate as a hedge against inflation.

As apartment demand and rent growth move to levels more in line with historic averages, industry pundits have declared a return to normalcy from the unprecedented rent growth of the past 18 months, which was greater than any previous period in the apartment market’s history.

But Carl Whitaker, RealPage director of research and analysis, points out that the 2022 leasing season has been anything but normal.

“Absorption in Q3, historically the busiest time for apartment properties, was disappointing and surprising,” he said. For the first time in the 30 years of tracking the metric, RealPage’s technology platform recorded a third quarter decline in demand, which fell short by more than 82,000 units.

“This is the first time we have ever recorded negative net absorption for this point in the year, even during the Tech Bubble and Great Recession. What’s more bizarre is we are only one year removed from the single highest third quarter in history—Q3 2021,” he said.

“We expected new lease demand to taper off, but not to this degree,” said RealPage’s Jay Parsons, head of economics and industry principals.

Tim Bodner, partner and real estate deals leader at PriceWaterhouseCoopers thinks the cause of weakening demand is affordability issues, since more renters than ever are paying 30 percent of their wages on rent and 23 percent are spending 50 percent or more.

Between January 2014, when rent growth began to rise above the long-term average, and August 2022, average rents increased 49 percent, much faster than wages, which only rose 29.1 percent, according to the Bureau of Labor Statistic employment cost index.

Although renters have so far absorbed the higher rents, Bodner said it is becoming clear that they will be priced out of the market if the increases continue.

Parsons agrees that the rent increases seen over the past few years are unsustainable, but blames the anemic demand on uncertainty in the market.

“Median rent-to-income ratios are at 23.2 percent for professionally managed market-rate units, according to a large affordability study, and collections haven’t fallen in any rental sector except subsidized affordable, where they’ve fallen by three percent. We see no indication of stagnating income among renters in professionally managed market-rate properties or that they are having trouble making rent payments, nor are we seeing a flight from Class A to Class B properties or to less expensive markets.

“Instead, inflation is contributing to weakened consumer confidence and heightened uncertainty. When people are unsure about an economic outcome and their personal security, they go into ‘wait and see’ mode and hit the pause button on their housing search,” said Parsons.

Renters over the past few quarters have received unwelcome surprises in the form of double-digit rent increases and are wondering if there is any relief in sight for them on the horizon.

Many renters are realizing after shopping the market that the best deal available just might the one they already have, with renewal rates in most cases significantly below market for a new lease. When moving costs are added to the equation, staying in place turns out to be a renter’s best option.

Bodner suggests that renters watch for niche opportunities to cut costs. Co-living apartment rentals can help with affordability and renters can take a page from the student housing playbook by splitting a larger unit with one or more housemates. They can also look at extending their existing lease if the terms are affordable or move to less pricey markets, he said. 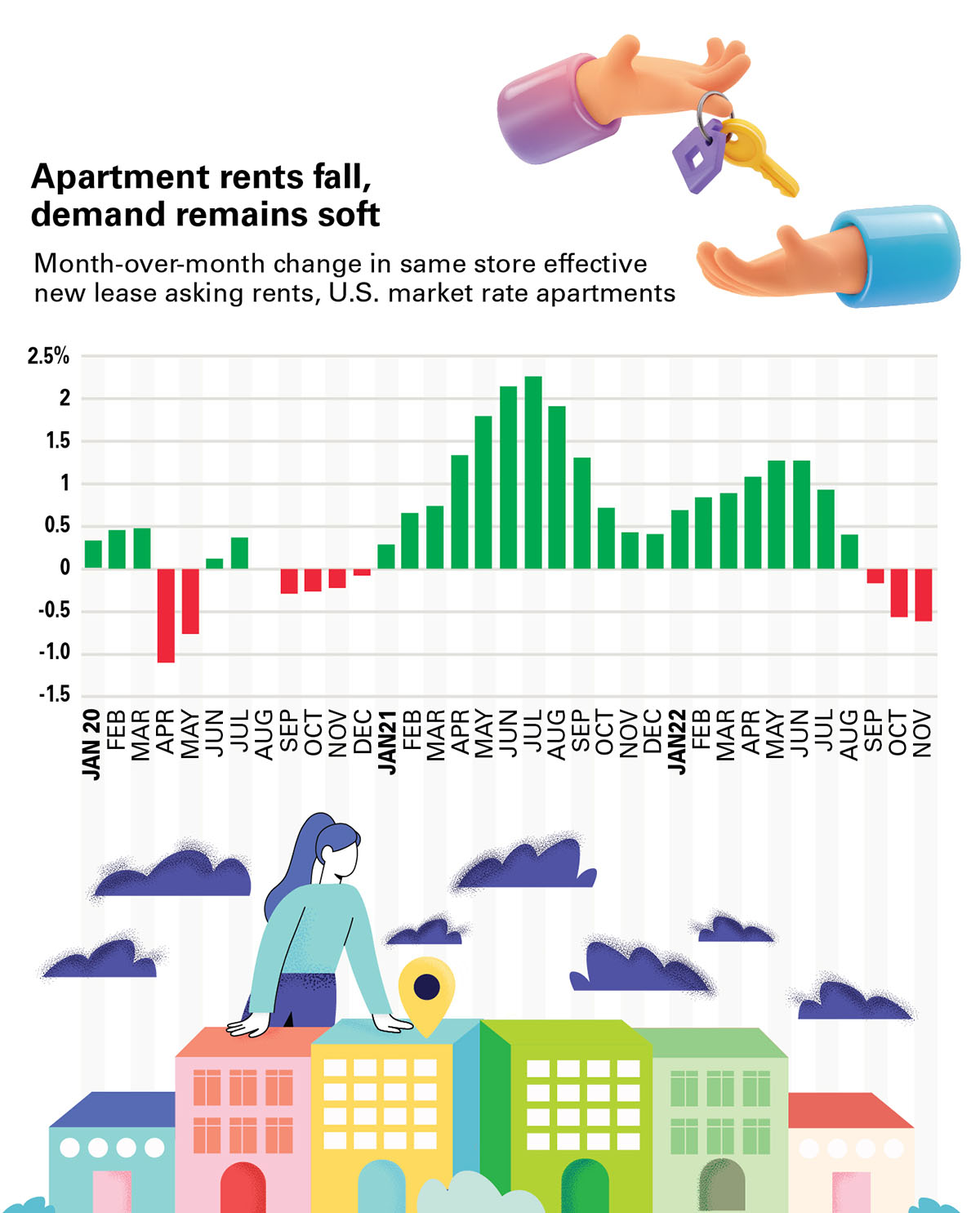 According to ULI’s Emerging Trends report for 2023 that uses data from more than 2,000 real estate industry experts across 80 traded markets in the U.S. and Canada, investors plan to ride the slump on the sidelines and reposition for another period of sustained growth and strong returns rather than risk acquisitions in an environment where initial yield is lower than mortgage rates.

But an optimistic multifamily investor in the ULI Emerging Trends report predicted, “We will look back in 10 years and the prices we see as astronomical today will seem like bargains.”

Apartment REITs, say analysts, are well equipped to outperform through the sector’s inevitable normalization period, but supply could prove a longer-term headwind for the multifamily sector as a whole since the number of multifamily starts and units under construction are at a 40 year high.

The multifamily REITS already were being hammered by higher interest rates and additional supply in the face of falling demand is not a good mix, analysts warn.

Roughly 917,000 new units, mostly in higher rent tiers, are scheduled to deliver in the second half of next year, although lingering supply chain problems and protracted construction timelines could limit completions.

If all the units in the pipeline deliver over the next 24 months, Fannie Mae predicts the pressure on owners to fill units as they come online will result in a rise in the number of multifamily units offering concessions.

The government sponsored mortgage lender thinks if unemployment increases and housing formation slows, even the more affordable B and C class units may need to offer concessions. High mortgage rates, however, may act as a mitigator by pricing renters-by- choice out of homeownership and keeping them in the rental market. This, says Fannie Mae, could provide enough underlying demand to prevent property owners from having to offer even higher concessions through the end of 2023.

In early November, Yardi revised its Matrix forecast for 2023 downward amidst fears the recession could stall even the recession resistant multifamily industry in 2023.

Although end-of-year growth for 2022 will be significantly elevated from the long-term average, the Matrix report says almost all that growth has already occurred and predicts most markets will finish out the year with minimal additional growth.

Rent growth typically is concentrated in the peak leasing months of spring and summer, when more people move, although 2021 was an exception to the rule.

“This year we see seasonality return to normal, which could mean some negative absorption, negative demand and also negative rents. But, if those numbers are mild, I think that’s actually a sign of a healthy market, so I hope people avoid a panic view, because as long as we don’t see big cuts, slowing is actually a good sign,” said Parsons.

Bodner agrees that normalization is an important step to healing the industry, pointing out that the newer entrants to the apartment sector have never even seen normal.

“When the Fed increases rates at 75 basis point increments, like they have recently, they usually come down in increments of 15, 20 and 25 basis points. That alone tells us we are in for a period of two, three or four years of renormalizing,”

“If you look at past downturns, there is always a period we call the Season of Price Discovery during which buyers and seller agree on a price for transactions to occur,” he said, adding that the discovery process takes into account supply, demand, investor risk attitudes and overall economic and geopolitical environment.

The rising cost of debt combined with the Fed’s interest rate hikes has dampened what had been a steady flow of multifamily trades since 2020 and many investors have decided to sit on the sidelines, unsure how to value properties because of this disconnect between buyers and sellers.

“We are seeing deal volume down 50 percent, but that’s not that much when you consider how ferocious 2021 was,” said Bodner.

“The phenomenal growth since the financial crisis and discipline in the capital markets has kept the industry from overbuilding and going into a downturn. Today we still have great demand characteristics in most multifamily product types and lots of dry powder. I’m not sure we’ve ever entered a downturn like this with so much dry powder,” he said during a podcast with Bull Realty’s Michael Bull.

By most accounts, the apartment market will begin to recover by mid-2023. “If the job market remains strong, we should see pent-up demand unlocked ahead of the spring 2023 leasing season. That’s a big ‘if’ of course, but rental demand has never in history held negative for a sustained period, even in recessions,” said Parsons.

The Federal Reserve Bank of Dallas, which uses data from the federal government’s consumer price index, expects year-over-year rental price growth to rise to 8.4 percent by May 2023.

Similarly, Moody’s Analytics predicts a 5 to 7 percent annualized rent growth during that same time period. In perspective, annualized rent gains were at 4 to 5 percent before the pandemic.

And Fannie Mae in its October market commentary forecast modest rent declines for brief periods next year, but expects no permanent interruptions in job growth or demand for rental housing, even with a recession looming.

Meanwhile, the tone among industry players is cautiously optimistic that multifamily will remain resilient among economic headwinds. 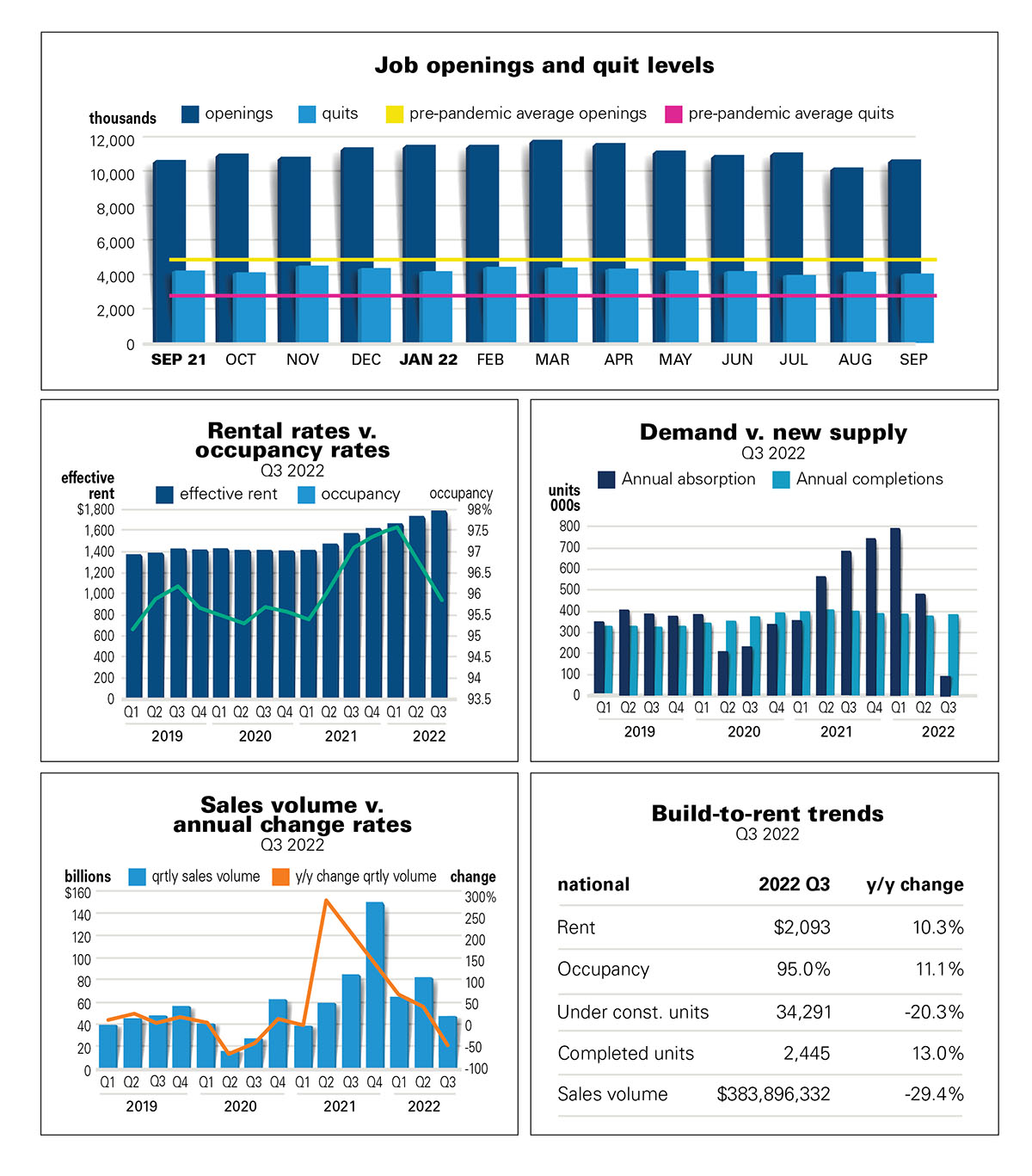