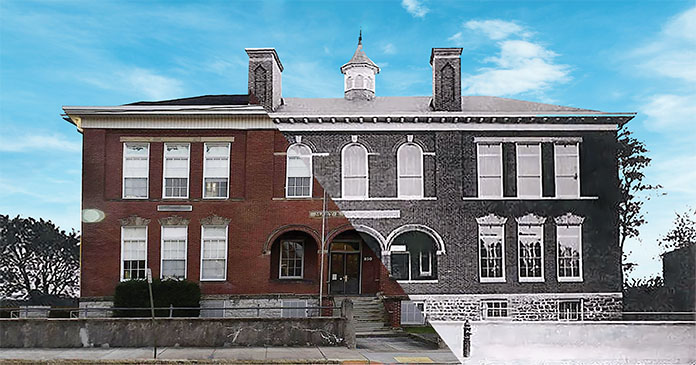 A historic school in Chambersburg, Pennsylvania, will serve generations to come as an apartment complex.

The old Mary B. Sharpe Elementary School was sold at auction for $600,000 according to John F. Kohler Jr. of Gateway Gallery Auction.

The building at 850 Broad St. was last used in 2018, 10 years after Chambersburg Area School District stopped sending students there. Built in 1908 by architect Franklin Keagy, who oversaw the construction of hundreds of buildings in the years after Confederate soldiers burned the town in 1864, it was the oldest school in the district.

The winning bidder, Aaron Carmack, of Atlanta, said he and his business partner, local architect Vern McKissick, plan to preserve the structure’s early 20th-century charm while building out apartments to suit 21st-century lifestyles. They estimate it will take about two years to complete the project.

“We want to keep the exterior and interior as close to what it currently is but bring it up to date. We plan to restore the outside with the original cornices and big cupola on top of the building,” Carmack said in a news release. “We want to polish it back to the way it was.” McKissick said.

At more than 14,000 sq. ft., the building as it stands holds eight classrooms, two offices, a library and restrooms. There was no cafeteria; students ate lunch at their desks.

Carmack, who attended kindergarten at the school, said he sees potential in parts of the building that were never finished.

“On the back of the building, there are 11-ft. ceilings and none of that space was ever finished,” he said.

First though, McKissick said the priority will be completing the process to get the building on the National Registry of Historic Places. The designation will open the project up to historic preservation tax credits.

The school has been on McKissick’s radar for years as parties concerned about its future sought his help in achieving a good outcome. He knows all about redeveloping an old school into apartments.

McKissick led the years-long endeavor to redevelop Rose Rent Lofts. Additions stitched together over decades were demolished to uncover the 1909 building that was once the original Chambersburg High School. The structure was renovated into 31 market-rate apartments of various sizes and designs. Parts of the old school—everything from chalkboards to the stage of the former music room—are incorporated throughout.

That project was a “monster,” McKissick said. The final phase—transforming the 1930 building into a hub of corporate and residential spaces—is still a year from completion.

McKissick anticipates the Sharpe elementary project will be easier because, save for a rear addition, it was never updated and was well-maintained by the school district.

Carmack and McKissick are asking for the public’s help to incorporate the building’s past as a school in its future as an apartment building. “We want to retain as much of it original as we can. If there are people who have pictures inside the classrooms and other effects that could help us preserve it, we will take all the help we can get,” Carmack said. “We do have the original plans, but it would be really helpful if folks can help us with any artifacts that would make this a more complete project.”