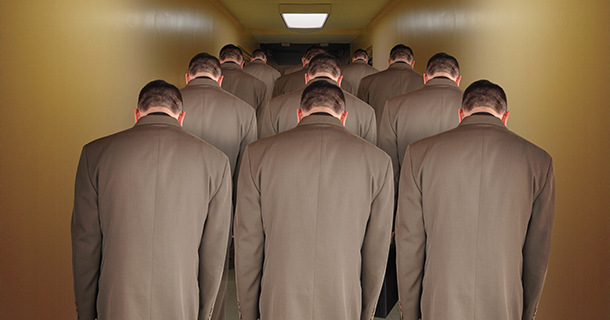 And when we bumped into each other last week, I found her toiling away in exactly the same role, still dreaming of her nonprofit venture, but now more depressed than ever.

Why can’t Susan leave the job she despises? More generally, what powerful forces pull us back toward the “devil we know?”

As job dissatisfaction rates climb toward 80 percent, it’s pretty safe to conclude that many of you reading this would rather be doing something else professionally. But in my interviews, I was surprised to find that people’s inability to quit their current jobs had nothing to do with the perceived riskiness of their new professions, the fear of unemployment if job options fell through, or even how well they had defined their proposed new career step.

An overworked lawyer was hesitant to pursue his dream of regaining balance in a comparatively safe nine-to-five corporate job, despite given numerous opportunities to do so. A marketing professional who dreaded the thought of planning the next strategic campaign couldn’t bring herself to move into management consulting, a move which she acknowledged would be both exciting and a much-needed change. And the many young men and women I met who hated their jobs but didn’t know what to do instead? Most of them are in the exact same place today.

As I’ve found out, throwing in the towel on a dead-end job is actually quite difficult, even when you really want to. Here’s why:

You’ve been conditioned. Scientists know that the best way to train someone to perform a behavior is to reward them for doing so at random intervals. In the famous Skinner experiment, one group of rats earned a food pellet after pressing a lever a random number of times, and another group of rats earned the pellet after a fixed number of lever presses. When the rewards ceased, the rats under the fixed schedule stopped working almost immediately, but those under the variable schedules kept working for a very long time.

What’s the link? If you look closely enough, you’ll find that the corporate world is littered with hundreds of these variable reinforcement schedules. Spontaneous recognition from our bosses, an unexpected bonus or promotion, and landing a big new client are all professional “pellets” subconsciously conditioning us to keep working that lever. Whoever called it a “rat race” wasn’t joking.

Your losses are more visible than ever. Ubiquitous connectivity plus social media equals high virality. In other words, news now travels fast. So when your early-stage venture fails, your friends are going to know about it.

Why does this matter? It’s generally accepted that most people are risk-averse. They’ll take the sure thing over a potentially higher, but uncertain, payoff. In the age of high virality, your personal and professional losses are amplified and more visible than ever before, effectively increasing the downside of quitting your known, but undesired path. This means that most people, already extremely cautious, are finding it more difficult than ever to jump ship.

You suffer from premature optimization. Teresa Amabile and Steven Kramer’s The Progress Principle argues that by accumulating small wins we can achieve big results. But I’ve found that a sharp focus on incremental gains could also lead to “premature optimization.” Instead of surveying the landscape and climbing the highest mountain possible, we’re too busy scaling the first peak we happen to stumble upon.

Many of the individuals I interviewed displayed a sharp tendency to prematurely optimize, rather than to explore their options and start the climb to higher heights. One stated, “I’ll figure it out after I get promoted.” Another said, “one more month,” for eleven months in a row (and counting). As a whole, the group displayed a distinct preference for hitting just another small milestone, rather than starting from the bottom of a different (but potentially more lucrative) mountain altogether. This strong human bias toward accumulating small wins is what we call progress, but paradoxically, it seems to be inhibiting many individuals from reaching their true potential.

So often in life, you want-or need-to move on from your job. But it’s a pretty good bet that you won’t. Why won’t you quit?