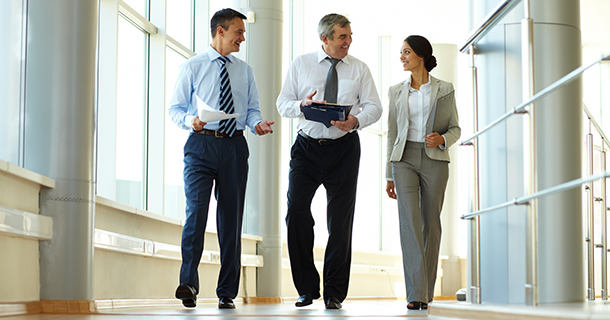 Perhaps she learned it from her mother or perhaps from her classical training in ballet, but she instinctively read my body language and used that to communicate back to me. There hasn’t been a day that I haven’t used this to help me understand others.

While most literature on body language is inordinately fixated on the face, I think it worthwhile to consider what the shoulders can reveal about us. It is rare that the shoulders are mentioned in the nonverbal literature and when people are asked about the topic, they just shrug their shoulders, and that is the irony. The shoulders are there. They hold up our clothes, they shape what others think of us, they reveal our health and emotions, and they assist us in communicating, yet most people ignore them.

Both Desmond Morris, the famous zoologist, and David Givens, the famous anthropologist, have talked about how wide muscular shoulders, as found on the statue of David, represent strength and virility. It is also something the Greeks particularly valued, as shown in their kouros statues with “V” shaped young men. There is probably a genetic component to this as Morris argues that we associate positive attributes to males who have that mesomorphic “V” look (wide shoulders narrow hips), that we see on athletes. Perhaps this explains why women swoon when soccer player David Beckham takes off his shirt. Here the shoulders are communicating health and vitality and from an evolutionary perspective, as Givens would say, there would be biological advantages to selecting mates with these features.

We are subconsciously attracted to this “V” shape so much so that men’s jackets are purposefully padded on the shoulders to insure that we achieve this shape. I once heard a tailor telling a client that he could add extra padding to the shoulders if he wished: a hint the man should have taken since he was unfortunately pear shaped.

The shoulders communicate vitality but they can also communicate dominance and hierarchy. Over my career I have interviewed a lot of criminals and I always made it a point to ask how they assessed their victims before they acted out. Over and over three things stood out, how their victims looked (frail, weak, not athletic), their overall situational awareness (never go after someone who sees you first), and their arm swing (vigorous arm movement or passive subdued). To a criminal, our own intraspecies predators, as Robert Hare would call them, how the shoulders look is a key factor for those who seek to prey on us. As one psychopath said to me, “silverbacks don’t go after silverbacks, they go after everything else.” Good point.

No matter what branch of the military you observe, one things stands out: their shoulders say look at me, I am a leader; follow me. This is part of establishing hierarchy, but it is also how we demonstrate respect. This is especially so at the Tomb of the Unknown Solider at the Arlington Cemetery, where pride and respect is reflected in the posture and the shoulders of those who tirelessly guard those tombs. Even during hurricanes those dedicated soldiers, ramrod straight, shoulders back, communicate that they value the solemn sacrifice of others. You can’t do that by slouching the shoulders.

As with dancing, shoulders reveal what is in the heart and mind very effectively. So much so that they can even be used to gauge depression. Years ago a well known forensic psychiatrist in the Washington, D.C. area gave me some valuable insight. He said, “Many of the patients I see are depressed and even before they open their mouths I can see it in their shoulders-slumped and weighty-you rarely see any movement.” And he was right of course.

I have dealt with individuals diagnosed as clinically depressed. In each case, I could see shoulders that didn’t defy gravity, shoulders that lacked spontaneous movement, shoulders seemingly weighed down by the weight of their malady. And while a child coming home from school may demonstrate slumped shoulders for a few minutes or hours, the clinically depressed may be like this for months or years. In time, if not corrected, it shapes how they are perceived.

Without realizing it, everyday we use the shoulders to communicate nonverbally what we think. When someone asks us, “Which way is it to the freeway?” and we immediately shrug the shoulders, elevating them quickly and emphatically, this is our way of saying, “I really don’t know.” Nothing more needs to be said either here or in Borneo; it is a universal gesture. If we decide to answer that question verbally we will most likely simultaneously shrug our shoulders also to potentiate the message without realizing it. We do it because it emphasizes what we are saying. This quick gravity defying behavior (lifting up or shrugging of the shoulders) positively reinforces what was said. We have greater confidence in others when we see the nonverbal confirmation of the verbal message.

In thousands of interviews I observed how the shoulders betrayed those who lacked confidence or who were outright lying. I found that when people are unsure of what they are saying or lack confidence, their shoulders reflect that uncertainty. As they answer a question, they will say something such as, “I am positive he wasn’t here yesterday,” and as they do so, you see the shoulders or perhaps just one shoulder rise up slightly or slowly. This muted or slow inching up of the shoulders says, subconsciously, I lack confidence in what I am saying.

Clinicians have found this useful when they ask, “Are you going to take your medications?” and they answer back with a slight shoulder rise, they know something is up. As one doctor told me, “invariably they don’t want to come out and say what is on their mind: they don’t like taking that medication or it causes them a stomach upset. So rather than speak up they answer with a shoulder up or slightly raised.” For the caring clinician this serves as a great opportunity to ask, “What is your experience with this drug and has it caused you problems?” Observing the shoulders as they inch up should serve as a starting for even more questions to determine what are the issues.

The shoulder rise, is not indicative of deception (there is no single behavior indicative of deception) and it must not be construed that way but rather as an indicator of lack of confidence. It should serve as a warning that the person does not fully back up what they are saying. For example, if a manager asks, “Will this get done by Tuesday?” and the person answers “Yes,” but that one shoulder rises slowly as they answer, there are issues.

My next question to would be, “What could interfere with this getting done?” And that is when you hear, “Well, I have two kids that are sick right now and…,” and you realize that is why they subconsciously did that behavior. As I say in my book, Louder Than Words, “the body reveals what the mind conceals.”

The next time you are people watching, take a good look at the shoulders, especially children whose body language is so honest, to see what is truly in the heart and mind. And, oh yes, out of deference for our parents, stand up straight and put your shoulders back. It shapes how others see you.

Author: Joe Navarro, former FBI counterintelligence agent, and author of What Every Body is Saying.