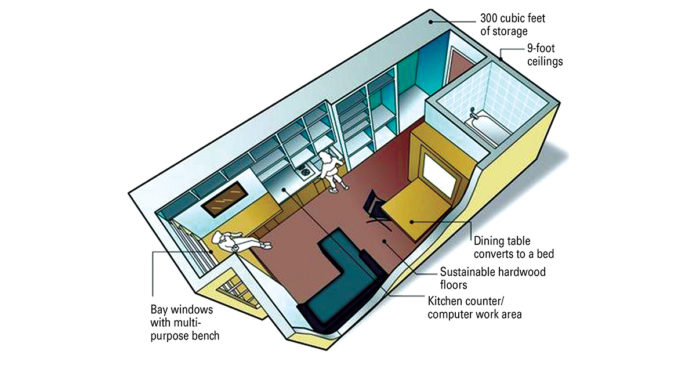 The city is considering shrinking the minimum size of rental units, prompted by a demographic shift toward one-person households along with rising rents and an acute housing shortage.

“This seems like a logical, necessary response to housing in an extremely highcost market like San Francisco,” said Tim Colen, executive director of the San Francisco Housing Action Coalition, a largely developer-backed nonprofit that is “solidly behind” cutting the size of the smallest allowable apartment by about a third.

The new minimum would be 150 sq. ft. plus kitchen, bathroom and closet-220 sq. feet in total, about the size of a one-car garage. The current minimum with all rooms included is 290 sq. ft.

“The goal is to provide flexibility to affordable and market-rate developers to produce all sorts of housing,” said Supervisor Scott Wiener. “The fact is 41 percent of San Franciscans live alone. There are a lot of people who don’t need or can’t afford a lot of space.”

Some housing advocates dispute the idea that micro-units address escalating rents, saying that the compact dwellings are cheaper simply because they’re smaller.

She also worries that the “shoe-box” units could create a slippery slope of allowing other exemptions on considerations like natural light and ceiling height.

Patrick Kennedy of Berkeley developer Panoramic Interests hopes to build the micro-units in SoMa “right in the thick of the new Twittersphere there.” He anticipates housing young tech workers, fresh out of college, newly relocated to the city, unencumbered by possessions.

“That demographic cohort wants to continue their collegiate experience for an indefinite amount of time,” Kennedy said.

His planned 160-unit building, now in the entitlement process, will have lots of common areas: a huge lobby, a lounge on every floor and a rooftop deck. It will also have some larger apartments. It’s designed for car-free living; the only parking will be for bikes, with a City CarShare spot outside.

The ultra-efficient efficiencies will go for $1,300 to $1,500 a month, he said. Per city regulations, 15 percent of the units will be allocated as below market rate for low-income residents; he thinks those would rent for around $900 a month.

The average rent for a San Francisco studio apartment is $2,075 a month, according to real estate service RealFacts. Those studios average 493 square feet, making the per-square foot price $4.21. Kennedy’s proposed units, at 220 sq. ft., would rent for $5.91 to $6.82 per foot-a big premium.

Kennedy built a 160-square-foot prototype “smart unit” in a Berkeley warehouse. As compact and functional as a ship’s cabin, the main living/sleeping/eating/cooking room feels larger than its 10-by-11-foot dimensions, in part because of a coved 9-foot-4-inch ceiling and a bay window.

Every inch plays multiple roles. A built-in counter doubles as the kitchen work area and computer desk. A dining banquette converts into a guest bed; the couch becomes a queen-size bed. The foyer functions as an entryway, closet, dressing area and “appliance garage” for a refrigerator, microwave and toaster oven.

An MIT grad student lived in the unit for three weeks to help work out the kinks. Her feedback will inform some changes in version 2.0-bigger sinks in the kitchen and bathroom, a pull-down Murphy bed, and most critically, a traditional tub-shower in the bathroom, instead of the “Euro-style” shower that drains right onto the bathroom floor.

“I believe there is a large and unmet need for entry-level, car-free housing in a transit rich and culturally rich city like San Francisco,” Kennedy said. “A smaller unit size makes meeting this need more feasible and gives people a choice not available now.”

Similar trends led N.Y. Mayor Michael Bloomberg to announce a contest for developers to design a building of micro-apartments measuring 275 to 300 sq. ft. The winner gets to construct its brainchild at a city-owned site in the Kips Bay neighborhood.

Wiener’s proposal would limit the change to new construction so landlords couldn’t chop up existing rentals into micro-units and would limit occupancy to two people.

A bigger supply of smaller units would relieve pressure on other housing stock, Colen said. “The small efficiency dwelling units give people the option of living on their own and not have to occupy family-sized housing with a bunch of other unrelated adults.”