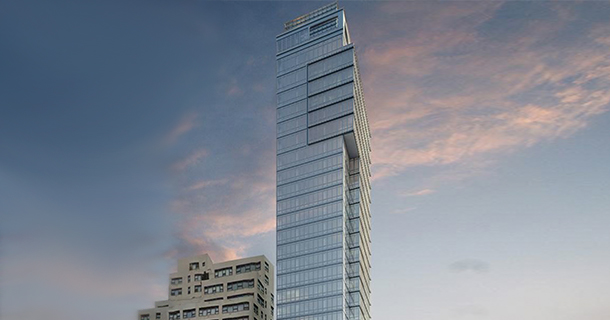 But now, with super luxury condo prices on the rise, the 98-year-old Litwin has joined the stampede of developers building over-size condominiums for the wealthy. Glenwood has filed plans with the city and state to put up a 19-story condominium on East 86th Street that will have only 15 apartments.

Thomas Juul-Hansen, the architect who created the interiors at the 1,004-ft. One57 tower under construction on West 57th, designed Glenwood’s limestone-clad building in collaboration with Steven B. Jacobs Group.

Glenwood’s entry into the super luxury condo business follows record high prices for large apartments in new condominiums both in Midtown and Downtown. The surge is pushing developers to focus on building larger apartments that have a special appeal to affluent families and international buyers. It is also making land too expensive for many rentals.

There are now two apartments in contract for $90 million or more at One57 and a third at another Midtown tower, 432 Park Ave. A penthouse at the top of 56 Leonard St. in TriBeCa is in contract for $47 million, brokers say. The number of listings is at a record low.

This premium for large apartments has led to a redesign at another taller Upper East Side development—the Charles on First Avenue near East 73rd Street—that is due to come on the market this summer: Now all apartments will have at least three bedrooms and a large glass walled living room.

BlueRock Real Estate began foundation work on the 34-story Charles condominium tower with 51 apartments in 2008. But when the developer resumed work on the project earlier this year, the building was reconfigured to have only 30 larger apartments. Victor Homes is overseeing the development of the project.

On the outside, the cantilevered glass building with a limestone base designed by Ismael Leyva in 2008 is little changed. But inside, the number of floors was reduced to make room for a double-height lobby and higher ceiling heights in apartments. David Collins designed the new interior spaces.

Both the Charles and Glenwood buildings will have no more than one apartment per floor, with elevators opening directly into all apartments, brokers say.

“At the high end of the residential market on the Upper East Side there has been very little inventory and the demand has been increasing exponentially every single day,” said Wendy Maitland, a senior managing director at Town Residential, which is marketing the Charles.

Glenwood, founded by Litwin’s father, put up a 17-story white-brick rental building, the Pavilion on East 77th Street in the early 1960s, and has been expanding its Manhattan portfolio ever since. It now manages 2,200 apartments on the Upper East Side alone, and is currently developing two large rental buildings on Amsterdam Avenue in the West 60s.

Glenwood, like many old-line New York developers, preferred the stability and tax advantages of long-term rental-income streams to the up-and-downs of the condo market, brokers said.

But over the years, especially at a time of rising apartment prices, rental building owners moved on to the sales market with new projects or converting existing buildings.

The Rudin family owns a large portfolio of rental buildings, but is now working on condo developments on sites that were once part of the now-closed St. Vincent’s Hospital in Greenwich Village.

Related Cos., the developer of the Time Warner Center at Columbus Circle, specialized in rentals in the 1980s, but moved on to condos during the 1990s, a company spokeswoman said.

Litwin resisted waves of co-op and condominium conversions over the years. The new building at 60 E. 86th St. will be the first Manhattan condo developed by the Glenwood team, though Litwin did do a large ground-up co-op on East End Avenue and East 86th Street 40 years ago.

Details of the new Glenwood building surfaced after two small buildings—a 30-ft.-wide townhouse and a 21-ft.-wide walk-up next door—were sold in March to a limited-liability company based at Glenwood Management’s office in New Hyde Park, on Long Island for a total of $31 million

In June, the limited-liability company filed a building permit application seeking to build a 19-story building that included 13 full-floor apartments and two triplex units. That was shortly after the company received permission from the state attorney general’s office to test market a condo at that address.

The condo application lists Litwin as the sponsor, along with two grandsons, Charles and Howard Swarzman, and two Glenwood executives, Gary Jacob and Charles Dorego.

Asked about the filing, Howard Swarzman said in a statement: “We are extremely pleased to continue our family’s legacy of bringing residences of great integrity and quality to the market.”

“We are confident we will exceed all condominium expectations,” he said.

The townhouse was sold by Columbia University and had previously been the home to a research institute. In the late 1960s and early 1970s, it housed the office of Dr. Kenneth B. Clark, a psychologist and civil-rights advocate who studied the harmful effects of segregation on school children.

But the price paid works out to about $593 a sq. ft., which made it too expensive for a rental development, even at the upper reaches of the market, several developers said.

Beth Fisher, the senior managing director at Corcoran Sunshine Marketing Group who is working on the 86th Street development said that while the “market was incredibly strong,” the Glenwood executives decided to price the apartments “very realistically.”

Prices will likely start at $7 million and go up to around $20 million, she said.