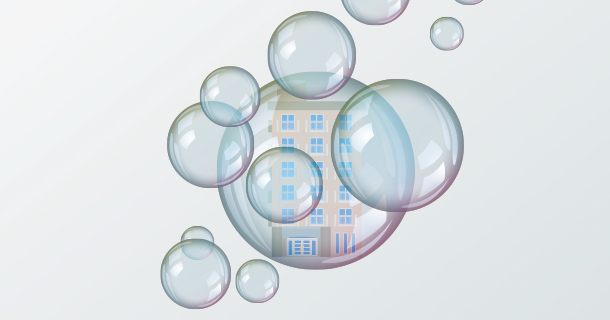 Apartment sales volumes are back to peak levels. Prices have jumped to all-time highs. Cap rates have dropped to long-time lows. And with demand high and funds uniquely accessible, apartment construction has surged to the highest levels since the 1980s.

Such high-water marks make it appropriate to ask the obvious question: Is multifamily reaching a bubble?

This is an especially critical question for banks because they have quickly become major players in the multifamily business. Since the start of 2013, banks have funded 82.5 cents of every new dollar, on net, loaned for multifamily housing, based on data from the Federal Reserve. Since Q2 2008, multifamily loan volumes have ballooned 32.9 percent up to all-time highs ($281 billion) on bank balance sheets, according to FDIC filings compiled by BankRegData.com. No other bank loan category has grown faster over that time period—and it’s not even close. Multifamily now comprises 3.5 percent of all outstanding bank loans, the highest level since 1992.

To answer the “are we near a bubble?” question, let’s first look at apartment fundamentals and demand drivers. Then we’ll compare some of the missed warning signs from the single-family bust with today’s multifamily market.

Apartment fundamentals recovered quickly from the last recession, as 2010-2012 marked one of the best periods on record for the industry in terms of NOI growth—fueled by big gains in both occupancy and rents, aided by very limited new supply. Since then, new supply has ramped up. Already, as of Q2 2014, new supply levels on a trailing 12-month basis are at decade highs. Yet demand for apartments remains robust, tracking above supply. So occupancy hit a seven-year high of 95.7 percent in Q2 2014. Same-store rents for new leases jumped 3.5 percent year-over-year—a strong performance, albeit below the 2011 peak of 4.8 percent.

What’s driving the hot streak, and is it sustainable? This is important for any serious effort to measure a sector’s potential for bubbling. One popular viewpoint is that the foreclosure crisis drove millions of people out of single-family homes and into apartments—a short-term, unsustainable lift for apartments. But the data doesn’t support that theory. Foreclosures turned single-family owners into single-family renters. And while the crisis did slow the tide of first-time homebuyers, there’s plenty of evidence suggesting a large swath of today’s young adults—even without the foreclosure mess or elevated underwriting standards—would still wait longer to buy homes due to the “prolonged adolescence” phenomenon. They are waiting longer to get married. Once married, they wait longer to have kids. Both provide an impetus for purchasing homes.

Demographics—not the foreclosure crisis—have been the key driver behind the apartment industry’s success. The U.S. is seeing its highest growth rate in 20- and 30-somethings since the Baby Boom, and population trends clearly show significant growth through the next decade—fueling a steady demand stream for apartments, even as the oldest Millennials start to buy homes (and they will) in greater numbers. Interestingly, “prolonged adolescence” isn’t just delaying home purchase. It’s also delayed apartment lease signings for some young adults—meaning there’s still pent-up demand for apartments. Pew Research Center estimates there were 21.6 million young adults (18- to 31-year-olds) living in their parents’ homes in 2012, up 3.1 million from 2007. For them, the most logical next step is to rent an apartment.

Simply put: Lots of young adults are renting apartments today, and more of them are coming. And these young adults are better equipped to support rent hikes than most realize. Millennials are widely portrayed as underemployed and poorly paid, but the data doesn’t support that view—not for the generation as a whole, at least. The Pew Research Center recently did the most extensive study to date on Millennials. One surprise finding: Millennial households command greater incomes than did previous generations at the same age (adjusted for inflation). Digging deeper, Pew found a disparity: All the income growth is coming among those with college degrees. Incomes for young adults without college degrees have dropped off. That disparity has obvious implications for apartment investors and lenders.

Do demographic trends inspire confidence multifamily isn’t bubbling? At minimum, it offers a contrast from the single-family bubble. You could make the case that demographics would have slowed home-buying even absent the foreclosure crisis or the issue of prolonged adolescence. By the mid-2000s, Gen X’ers had become the primary generation of age for first-time home purchases. The problem? Gen X is a comparatively small bunch, with only 40 million or so of them, sandwiched between two huge groups each more than two times bigger: Baby Boomers and Millennials. Artificial stimulants (low down-payment requirements, diminished credit standards, etc.) helped prop up demand, but only temporarily.

Beyond demographics, it’s worth comparing the conditions that led to single-family’s busted bubble of 2008 and those of today’s multifamily market.

First, the most obvious problem in the single-family bust was that banks lowered lending standards. For multifamily, banks are generally getting attractive terms. Loan-to-value ratios are typically around 70 percent in multifamily, so borrowers have a lot more skin in the game. Additionally, prices haven’t shot up near to the degree seen in single-family—not yet, anyway. This means multifamily values/prices would have to plunge further than in 2008-2009 before a bank’s investment becomes exposed. It was the lack of skin in the game that drove the nonperformance rate of first liens for 1-4 family homes (which is predominantly single-family) held by banks up to a peak of 10.1 percent in Q1 2010. That’s more than double multifamily’s peak nonperforming bank loan rate.

Additionally, loosened lending requirements in the mid-2000s inflated homeownership rates to historic—and artificial—highs, fueling the single-family bubble. The apartment industry doesn’t have a comparable driver you might deem artificial. And even if one existed, apartments can remove delinquent tenants quickly due to the nature of a lease term.

There is one more important comparison to make between single-family in the mid-2000s versus multifamily today—construction. The sharp rise in multifamily development has made headlines and inspired some to start crying “bubble.” But what does that data show?

While multifamily construction has surged upward, it’s still well below levels seen in the 1980s, 1970s and 1960s. And it’s highly unlikely to return to those levels. Single-family construction, by comparison, fed the bubble by shattering all kinds of records in the mid-2000s. Additionally, both Fannie Mae and Freddie Mac have published research suggesting current apartment construction volumes are actually insufficient to meet demand. (In our view, that’s only true if developers—and their lenders—diversify a strategy that, in this cycle, is heavily bent toward luxury, high-rent urban product inside core markets.)

All that being said, we should acknowledge that the apartment market is almost certainly past the peak for this cycle. That’s true of NOI growth (there’s less room to grow occupancy today, requiring bigger rent hikes to sustain NOI growth levels), loan yields (the marketplace is becoming more competitive) and cap rates (ditto). Early in the recovery, apartments were so hot that pretty much any deal was a good one. Today, as yields are normalizing, strategy is becoming more important.

Is multifamily housing near bubble status? The data says no, but—it’d be wise to adapt to the changing cycles. The biggest risk to the multifamily (like any sector) is the macroeconomic environment. If the economy weakens materially, the multifamily is vulnerable. Risk, though, varies from one multifamily deal to another. Banks can prepare themselves by narrowing their focus to specific market segments (geographic and class) that meet acceptable risk thresholds. Equally critical is to modernize multifamily underwriting standards. Multifamily has two big problems. First, unlike office and retail deals, most lenders aren’t underwriting tenants. Because of that, few lenders have tools to measure ongoing performance and risk. Second, many lenders still depend heavily on phone-surveyed comps. In a world where risk measurement is paramount, do you want the integrity of a deal to be dependent on whoever answers a phone providing honest answers for a snapshot of one day in time that may not be representative of a broader pattern?

In other words, at a market’s high point, the best strategy may not be to sit pretty or to backpedal—but to continually sharpen processes and to adjust to market cycles.

Author: Jay Parsons is the director of analytics and forecasts for MPF Research, the market intelligence arm of RealPage, Inc.