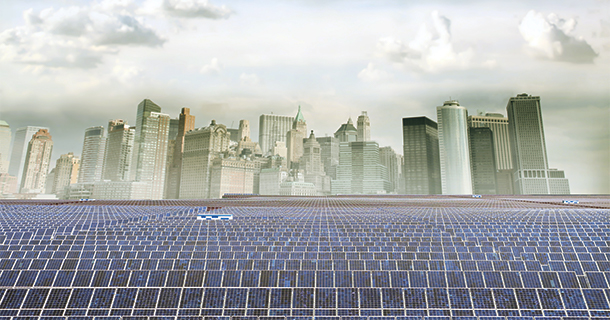 The program allows energy consumers to buy electricity from community solar installations, built by private companies in or near their communities. Each installation would serve many customers, but participants would pay for their electricity as if they had their own rooftop systems.

“There are plenty of folks that just have no option for doing solar on their own property,” said Matthew Freedman, a staff attorney for The Utility Reform Network, a San Francisco-based ratepayer advocacy group. “This becomes an alternative to that.”

But that rapid growth has excluded tens of millions of people across the state.

Many homeowners, meanwhile, don’t have good enough credit scores to qualify for a solar contract—and even if they do, their roofs might be too heavily shaded for solar. A 2008 study by the National Renewable Energy Laboratory found that nationally, only about 25 percent of residential rooftop area is suitable for solar panels.

Renewable energy advocates have long seen community solar as a way to get around those roadblocks, but the idea has been slow to take off. According to SharedRenewables .org—a project of Vote Solar, a national advocacy group—there are just 55 such projects in the United States, including two in the Sacramento area.

“Various municipal utilities around the country have been interested in doing this,” said Susannah Churchill, Vote Solar’s regional director for the west coast. “Part of it has been designing the model, and utilities and state policymakers looking to see other places where it’s happening.”

Now, California could become a model for other states. Legislators passed a bill in 2013 ordering the state’s three major utilities—Southern California Edison, Pacific Gas & Electric and San Diego Gas & Electric—to buy up to 600 megawatts of “shared renewables,” and directing regulators to oversee the program’s implementation.

After several delays, the California Public Utilities Commission issued a proposed decision approving a program in December. The commission could finalize its decision as soon as January.

Under that program, private companies would build mid-sized solar projects—larger than most rooftop solar installations, but smaller than the large-scale projects being developed across the desert. Energy consumers served by Edison, PG&E and SDG&E would be able to sign up through their utility to buy electricity from those projects.

But Sean Schwerin, the district’s interim supervisor for energy customer programs, said it’s currently developing a program that would incentivize community solar. The program is still a work in progress, but it could be ready to roll out in as little as two months, he said.

“We tend to want to follow very closely what the industry at large is doing,” Schwerin said.

Under the state-mandated program covering Edison, PG&E and SDG&E, energy consumers would initially sign up for one-year contracts with the ability to drop out during the first 60 days without penalty. Those provisions could attract people who are nervous about signing up for solar, or homeowners who are hesitant to sign long-term contracts because they know they might move. At the same time, participants would be allowed to take their solar contracts with them if they move.

Additionally, no one would be barred from signing up based on their credit score.

“People have been talking about community solar for a long time,” said Brad Heavner, policy director for the California Solar Energy Industries Association, a Sacramento-based trade group. “If it’s a system that works, I think a lot of people are going to want to participate.”

From a financial perspective, Freedman said, the biggest draw for community solar participants is that they’d be locked in to current electricity rates for solar generation.

“As prices for energy go up for everybody else, they would be relatively unaffected,” he said.

Still, utilities would be allowed to charge community solar participants several fees that aren’t paid by traditional rooftop solar customers. The size of those fees is still being debated before the public utilities commission, with solar advocates and utilities engaging in a long-running dispute over the relative costs and benefits of adding distributed solar power to the grid.

Whatever the commission decides, it’s all but certain that community solar participants will save money over time—just not as much as traditional solar adopters.

“The margins are going to be a little tighter than if you put a system on your own roof,” Heavner said.

What’s less certain is how many people will sign up for community solar. While the program’s 600-megawatt cap isn’t nearly enough to cover the tens of millions of Californians who can’t access solar, similar programs typically have participation rates in the single digits, Freedman said.

Even Churchill said she couldn’t predict how many people will sign up.

“California is such a green place, and a place where there is much interest in making climate progress and making green consumer choices. All of that is very encouraging for the program,” she said. “But I think it’s hard to say.”

Renova CEO Vincent Battaglia said he doesn’t believe private companies should be able to make large profits off community solar. Utilities, he argued, should provide such projects on their own.

“I hate to sound like a socialist, but the government should definitely put the hammer down on utilities and require them to offer heavily discounted solar under these community solar programs,” he said.

Legislators have mandated that at least 100 of the program’s 600 megawatts be built in disadvantaged communities. Based on factors like air quality, water quality and unemployment, dozens, if not hundreds, of census tracts in Riverside County and San Bernardino County would qualify for “disadvantaged” status.